The private schools have followed a similiar blueprint in the growth and development of their players, programs.

The junior faceoff specialist won 37 of 43 draws in three wins for the Patriots.

Spillane coached the Panthers to four state finals, including a Division 1 state championship in 2016. Franklin qualified for the postseason in each of his 21 years.

Prep’s senior catcher delivered decisive blow for second-ranked Eagles with RBI triple in the fifth inning of a 2-1 win over BC High.

The Redhawks team of Grace Connolly, Abby Gerdes, Kylie Langan, and Nikki Krail won the sprint medley relay in a meet-record time of 4:06.36.

Concord-Carlisle’s Charlie Cook scored a key goal at the end of the third quarter in the rematch of the MIAA Division 2 title game.

After their third straight league title last season, the Dragons finished second at sectionals and fourth at states.

Meet Lou Levine, the referee who donates all of his game checks to fighting cancer

The Acton official has raised more than half a million dollars for the American Cancer Society through donated game checks, whistle sales, and more.

Many EMass coaches increasingly find video as a useful tool in evaluating and improving player performance.

Increased focus on mental issues comes with call to action

The MIAA and the Massachuchusetts Secondary Administrators’ Association added seminars this year as school cope with a growing need.

Boston Latin pulled out a five-set boys volleyball battle in which neither team won a set by more than four points.

McCutcheon scored the tying goal to send it into overtime, and scored the winner with 40.6 remaining in overtime.

The senior righthander fired back-to-back shutouts against Lincoln-Sudbury and BC High.

Lowell softball team off to a fast start with reloaded lineup

The Lowell girls’ softball team has been forced to do a bit of reshuffling this spring.

Clay Casaletto, Jake Harrison, and Patrick O’Neill helped put together a team for their senior season.

At Hingham, lacrosse success is programmed at youth level

EMass baseball: Natick’s Will Haskell headlines Players of the Week

In three games, the junior went 6 for 11 with two home runs, two triples, and nine RBIs.

No. 1 Lincoln-Sudbury, No. 2 Hingham to clash in Coaches Cup final

On trip to Georgia, Norwell discovers ‘what lacrosse is like in another part of the country’

Abby Cunningham of Melrose headlines Players of the Week

The senior had two goals — the 100th of her career followed by the game-winning score with 20 seconds remaining — in a 14-13 victory at Arlington last Thursday.

The freshman delivered an RBI double with two out in the fifth to drive in the lone run of the No. 20 Raiders’ 1-0 victory over No. 3 Methuen.

The Abington and Billerica high offenses are off and running behind the strategy of having quick lefthanded hitters at the tops of their lineups.

Matt Ward tallied six goals for the top-ranked Warriors (7-0) in a 12-9 victory over the previously undefeated No. 2 Harbormen (6-1).

After losing to Chelmsford in the North finals last year, the Lancers want to take their season to new heights in 2019.

Sophomore hit a 2-RBI double to left in the second inning for the top-ranked Panthers in a 6-2 win over No. 10 Rebels.

The Mass. State Track Coaches Assn. objected to MIAA fee proposals and believes it can run meets more efficiently by itself.

Caroline Curtis of Holbrook headlines Players of the Week

The senior starred on the mound and at the plate in the Bulldogs’ season-opening win.

Lindsay Bugbee Crosby’s memorial fund will be the beneficiary for the 10th annual event, which began with some stellar matchups and finishes.

After No. 1 Hawks squandered a 6-1 lead, Carroll scored four of his six goals in the second half of 13-11 win over the host Dragons.

Craig Yannone of St. John’s Prep emerges as an X-factor on faceoffs

All-American has given Eagles a distinct advantage as one of the best faceoff specialists in the state in the faceoff-X.

How to reach us

Reporting scores? Have a story idea?

Here's how to contact the Globe's high school sports department to provide results, share news, or ask a question.

Our database of high school schedules, results, and game recaps is updated as scores are reported to us daily.

The Globe schools sports staff chooses teams for its Top 20 rankings and updates them every week of the season. 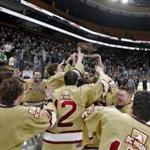 A historic hockey marathon, a scoring machine, and other top moments from this winter 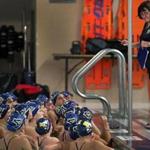 A legendary coach retires, a game-winning drive, and other top moments from this fall 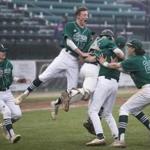 The spring season got off to a soggy start, but had a brilliant finish

Here are 10 moments from the spring high school sports season that stood out. 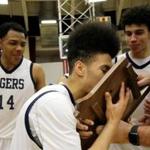 This winter season was filled with sportsmanship, success, and drama

Here are 10 moments from the recently completed high school sports season that stood out. 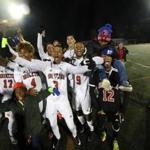 10 moments to remember from the fall high school sports season

A longtime coach stepping down, a golf controversy, and teams on streaks highlighted the season. 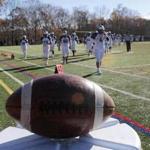 Here’s a look at the scores from around Eastern Mass. 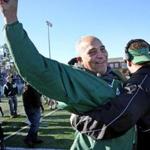 Leftovers from a happy Thanksgiving in high school football

There were many highs Thursday, including the bittersweet retirement of Marshfield coach Lou Silva. 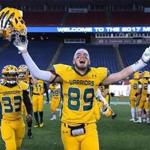 State champions were crowned at Gillette Stadium on Friday and Saturday.

Take a look at previous Globe All-Scholastics honorees in this archive.

Pick any school in Eastern Massachusetts and see their rival and record on Thanksgiving Day.