Get the best of Globe Sports right to your inbox

The one thing Boston College women’s lacrosse coach Acacia Walker-Weinstein was certain about after watching star attacker Sam Apuzzo put together the most dazzling season in Eagles history a year ago was that Apuzzo was still nowhere near her ceiling.

As a junior, Apuzzo was to the Eagles what James Harden is to the Houston Rockets — an offensive force whose scoring ability felt both limitless and inevitable.

Apuzzo had already set program records for goals and points in a season as a sophomore, but she shattered them in 2018 with 88 scores and 129 points, pushing the Eagles to a second straight trip to the NCAA national championship game and earning college lacrosse’s most prestigious individual honor, the Tewaaraton Award.

But when Walker-Weinstein looked at the numbers, she saw room for Apuzzo to keep pushing herself. She had Apuzzo do a little math. 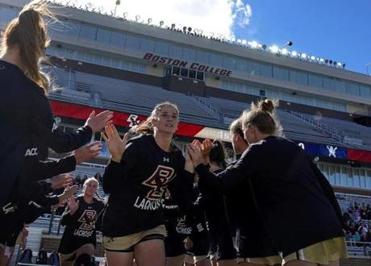 Jordan Lappin and Cara Urbank netted three goals apiece and Abbey Ngai made 13 saves on 17 shots for the Eagles.

Walker-Weinstein challenged Apuzzo to tick her shooting percentage up to 60 or 65. It’s a challenge that defies physics (it’s easier to go from 0 to 30 miles per hour than from 55 to 56), but Walker-Weinstein never doubted Apuzzo.

“She has more to give,” Walker-Weinstein said. “She has more talent than anyone we’ve ever coached before. But she also has this drive that she wants to be good. She wants us to figure out where she should be better. She loves it.”

Apuzzo was already on the same page.

As top-seeded and No. 1-ranked BC opened the Atlantic Coast Conference tournament Wednesday with a 15-4 victory over No. 8 seed Louisville, Apuzzo still had those numbers in her crosshairs. Throughout a flawless 17-0 regular season, she racked up 72 goals and 99 points on 57 percent shooting. She has scored multiple goals in all but two games. She scored at least five goals six times.

Some defenses will send double-teams. Apuzzo will find a goal. Others essentially will assign a defender to face-guard her for 60 minutes.

“The past three years, every defense has thrown everything at her, and she still prevails every single game,” said graduate senior and 2017 NCAA championship MVP Kenzie Kent.

There’s no denying that all the attention from defenders can be annoying.

“It’s kind of hard because there’s only so much you can do,” said Apuzzo. “But when a defense face-guards you and literally does not let you move at all, they’re almost like hugging you, I’m just standing there like, ‘I’m not going to get the ball either way, so I’m not going to try.’ ”

But decoding defenses is what makes the challenge that much more fun.

“It’s a very mental thing,” she said. “You’ve got to really think through stuff a little bit just because there’s so many different ways. It’s fun. Especially when you beat them.

“It also can be pretty stressful because if it’s something we’ve never seen before, it’s not as easy to do right in the moment.”

What makes Apuzzo so dangerous is that she always has a counter. Whether it’s the footwork and stickwork she spent the offseason improving or the behind-the-back shot she added to her arsenal, she is always tinkering.

“I’d say the biggest thing for Sam is she’s just every day trying to get a little bit, tiny bit better. Incremental improvement.”

Apuzzo has always been an intense studier. Now she’s diving even deeper, mining for weaknesses in her defenders, poking for holes in the defense.

“Part of that is good because she’s so smart and knows exactly how to exploit weaknesses, whether it’s a unit weakness or a weakness that a defender may have,” Walker-Weinstein said. “People try everything. But she’s so dynamic and flexible in her game. She can reach into her tool belt and grab so many different things that she’s really difficult to stop.

“She’s a consumer for knowledge. So from the very beginning, she was taking on coaching tips everywhere. It’s really rare for a player to hear what a coach tells you to do and then to immediately apply it consistently over the course of time.

“And she can stack information on top of each other, which is helping her build her game. She’s incredibly cerebral but she’s also very athletically gifted, so I think that helps.”

It also doesn’t hurt having All-American defender Elizabeth Miller as an everyday sparring partner in practice.

Their battles are undeniably competitive.

Who has the edge?

“It goes back and forth daily,” Miller said.

But Miller is never quite sure what to expect.

“She’s always trying something new out in practice, and if something works, she just tries it harder, and if we catch on and cheat a little bit, she’ll just do something else. So it’s really fun seeing the new stuff she tries in practice, but then also how it translates into games.”

It’s been a long time since the Eagles have lost, but they still remember the sting of their 16-15 loss to James Madison in last year’s national title game.

“I don’t think this program will ever forget what it felt like last year,” Walker-Weinstein said. “It’s always in the back of our mind. It’s not the focus, but our hearts were broken last year. You don’t forget how that feels.”

This will be the first step on the road to a third straight championship game appearance, and their primary weapon couldn’t be sharper.

“I think they’re humble and hungry and trying to be a lot better,” Walker-Weinstein said. “Which is a really good place to be going into a tournament.”