Sign up for Varsity News to be alerted when our full Winter All-Scholastics package is posted online Friday. The full print package will be in Sunday’s Globe.

1. BC High made history on a long night at Garden

Spring sports for MIAA schools officially started Monday, March 18. At 11:30 the night before, those inside TD Garden were beginning to wonder if the winter sports season would ever end. Battling for the Division 1 boys’ hockey title — in the sixth game of the day — Duxbury and Winchester did not take the ice until 9:58 p.m. On a school night, no less. Their puck drop was put on hold while BC High and Pope Francis skated for 87 minutes and 22 seconds, an epic four-overtime marathon that is the longest championship hockey game in state history. But 6:22 into the fourth 12-minute OT of their Super 8 final, freshman Declan Loughnane flicked in a wrister to lift BC High to an exhausting, yet exhilerating 2-1 victory and back-to-back titles. “A surreal moment,” said Loughnane. “I just remember jumping into the glass and the puck going into the net.”

2. Tears for A-B coach who pooled his efforts

Away from the pool deck, Jeff Johnson was rather quiet, a trait he acknowledged more than once. But poolside, surrounded by swimmers thirsting for his coaching, counsel, and commands, he was in his element. And his passion was unrelenting, whether he was at Acton-Boxborough, where he was the boys’ coach for 41 seasons, with the Patriot Swim Club, which he founded, or the Acton-Boxborough Town Team. “He was the most inspirational coach I’ve ever had,” said former A-B star Corben Miles, now swimming at Georgia Tech. Less than a week after guiding the Colonial boys to a fifth-place finish at the North championship, Johnson died at 74. Aside from his 500 total wins directing the boys’ and girls’ teams, his impact on the swimming community was profound. “He was a tremendous mentor for young coaches, and talking to him was like a swimming clinic,” said former Weston coach Pete Foley.

3. For Cathedral, crowning moment started in the South

Before the Cathedral girls’ basketball team cruised past Hopkins, 65-36, for the Division 4 title to cap a dominating 22-2 season, the Panthers first had to take care of business in the South. And that meant a rematch against defending D4 champ Coyle & Cassidy in the sectional semifinals. A commanding 63-48 victory was pure satisfaction against a C&C team that had derailed Cathedral in the South final last year. “Last year, everyone was crying in the locker room,” said senior Dejah Jenkins, who had 13 points, 6 rebounds, and 5 assists in the victory. “I told them, ‘Don’t worry, we’ll be back.’ ” Coach Clint Lassiter’s squad certainly made good with a triumphant return for its third title in four seasons.

4. Klein an ace in the hole for Abington boys

Trailing defending Division 4 state champion Pope John XXIII, 68-59, with 78 seconds remaining in the state semifinals, the Abington boys’ basketball team needed a miracle to leave TD Garden with a victory. Through relentless defensive pressure and timely 3-point shooting, the Green Wave positioned themselves to tie or take the lead in the waning seconds. With Bryson Andrews, the program’s all-time leading scorer, watching from the sidelines with a twisted ankle, junior Will Klein played the role of unlikely hero, drilling a right corner 3-pointer to seal a 72-71 victory and Abington’s first trip to the state final. “Everyone knows that I don’t take a lot of shots . . . I think that makes it better,” said Klein. “It was cool to be open on that play and ready to shoot. [Making it] was the best feeling ever.”

On tired legs, 1 hour and 9 minutes into the Division 1 girls’ hockey state final against unbeaten Austin Prep, Methuen/Tewksbury made history. Playing in their second straight state final, the Red Rangers became the first girls’ hockey co-op to win a championship with a 2-1 double-overtime victory. Gifted finisher Julia Masotta, who played one season of high school hockey after suiting up for the Boston Shamrocks for three years, netted her 50th goal for the equalizer. She then set up classmate Carolyn Curley for the winner. But M/T does not carry the MIAA trophy around the TD Garden ice without the spectacular work of junior Kaia Hollingsworth (35 saves, punctuated by 12 in OT). 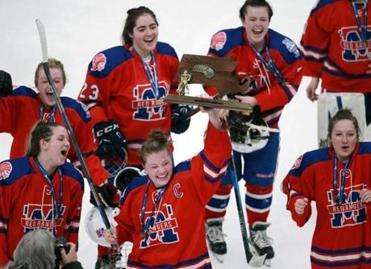 Here are the Globe’s 2019 Winter All-Scholastics

We highlighted the athletes and coaches who stood out above the rest this fall.

The clock inched toward 11 p.m. in mid-February before the Wayland girls’ swim team learned its fate — capturing the program’s first Division 2 title since 2014. The Warriors and two-time defending champ Duxbury were neck-and-neck all evening at Boston University’s FitRec Center. The Dragons had slashed the Wayland lead to 25.5 points in the final swim, the 400-free relay, beating the Warriors by a nose, 3:39.58-3:39.77. Then they waited nearly 45 minutes for the diving results, a championship hanging in the balance. In the end, a ninth-place finish from Wayland junior Hilla Almog provided just enough cushion for the Warriors to eke out a win, 253.5-248. Wayland coach Mike Foley joked that he gained a few grey hairs throughout the night.

7. Up off the mat, Haverhill ruled Division 1 North

Haverhill did not roll out the wrestling mats for the 2010-11 season because of low numbers. Less than a decade later, under the direction of 2003 grad Tim Lawlor, the Hillies pinned down the program’s first Division 1 North crown, recording a 42-point victory over perennial juggernaut St. John’s Prep. Heavyweights Chelmsford, Lowell, Methuen, and Shawsheen were there too. “Extremely gratifying,” said Lawlor. “The fact that we were able to bring it back so fast . . . it’s an amazing feeling.” Capping a 21-0 season, Haverhill rose to the top of the medal stand despite having just one individual champion, 160-pounder Sam Prescott. That’s a team effort.

The Bay State has never seen an athlete with the ability to heave the shot put quite like Aiden Felty. Three months after uncorking a throw of 67 feet at the Boston Holiday Challenge to break the New England record, the 6-foot, 260-pound senior from Innovation Charter Academy in Tyngsborough launched a toss 66 feet, 8¾ inches in New York City to take first at the New Balance Nationals. No athlete in the region could touch the Billerica teen this season. In addition to the national title, the Duke-bound Felty finished his senior season with All-State and New England titles, setting meet records in each. “He’s bringing a level of excitement to the sport that hasn’t really been there for a while,” said his throwing coach, Brian Woodbury.

9. A milestone for Jenks at Reggie Lewis oval

On the final Saturday in February, a duel between two of the state’s top runners captured the attention of athletes and spectators alike inside the Reggie Lewis Center. With two laps to go in the All-State mile, Natick senior Grace Connolly and Newton South junior Lucy Jenks separated themselves from the rest of the pack. Off the two stars went, stride for stride, as the bell rang signaling the last lap. The crowd grew louder, and the girls ran faster. It became a dead sprint. Neither would give an inch. Jenks found a little more juice down the stretch, surging ahead to nose out the Stanford-bound Connolly, 4:52.60 to 4:53.31. “I try not to lead,” Jenks said after the race. “My strategy is to take it out slow, kick at the end. I had a plan out in place.”

In gymnastics, rotations and the order of events can mean everything. And for the North Attleborough girls’ team, it was one final floor rotation at the South championship in Northborough that extended its season and changed the legacy the Red Rocketeers would leave on the program. Paced by Lindsay Robinson (9.5) and Megan Collins (9.2), North Attleborough (36.525) soared to a first-place finish on the floor, locking up the fourth and final spot in the state final. The Red Rocketeers also placed fourth on bars (33.9), seventh on beam (33.8), and ninth on vault (34.450). “We were sitting on the floor, and we were like, ‘We’ll probably get like, ninth,’” recalled senior Kristina Fournier. No, their final rotation was nearly flawless.