Here is a tale of two socioeconomic trends and one seductive myth.

Trend No. 1: There was a time when the wealthiest households in America — the top 1 percent — earned about 11 percent of the nation’s income, even as the great majority of income, more than two-thirds, went to the bottom 90 percent. That was in the mid-1940s, in the wake of the Great Depression and World War II. Income inequality in the United States was relatively low, and it stayed that way for the next three decades.

Seventy years later, the distribution of income is much less equal. According to Berkeley economist Emmanuel Saez, the top 1 percent of US households today account for 22.5 percent of all pretax income, while the bottom 90 percent collect less than half.

Trend No. 2 occurred over the same period: As incomes in America grew less equal, membership in unions grew less common.

In the decade that followed World War II, the percentage of American workers belonging to a union rose to nearly 35 percent. That high level of union density lasted for almost three decades, but by the 1970s unions were in decline. According to the Bureau of Labor Statistics, only 10.7 percent of US wage earners today are union members — and nearly half of them work for the government. In the private economy, just 6.4 percent of employees are unionized. 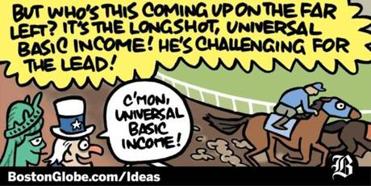 The consequences are unpredictable

Welcome to the inequality derby, where anything can happen!

So the way to reduce inequality is to reinvigorate labor unions? Not a chance.

One can make a plausible case that falling union density paved the way for the rich to grow richer. In a 2012 paper for the liberal Economic Policy Institute, labor economist Lawrence Mishel concluded that “deunionization can explain about a third of the entire growth of wage inequality among men and around a fifth of the growth among women from 1973 to 2007.” Two International Monetary Fund economists made a similar argument in a 2015 study. “The decline in unionization in recent decades has fed the rise in incomes at the top,” they wrote.

Not surprisingly, those who view income inequality as a terrible social malady seize on research like this to prescribe more union power as the remedy.

Senator Bernie Sanders hailed the IMF study as “a call to arms” — evidence not just that unions should be “revitalized and renewed” but that doing so “needs to be one of the major undertakings of our time.”

From former Labor Secretary Robert Reich comes an even more impassioned exhortation. “We must strengthen labor unions!” he declares in a video for MoveOn. Reich wants new laws making it easier for organizers to form new unions. In particular, he wants all state right-to-work laws — which protect the right of employees not to join a union — overturned.

But unions didn’t decline because laws are stacked against them or because employers have too much power. They declined because in the eyes of most workers they grew obsolete and irrelevant. And no amount of class-warfare drum-banging is going to bring them back.

As it happens, I belong to a private-sector union, and have been paying union dues for more than 20 years. I think private-sector workers should be perfectly free to bargain collectively — and just as free to shun unions. (Government unions, on the other hand, should be banned.)

I don’t share the left’s obsession with the wealth of “the billionaire class,” to use a favorite Sanders expression. Like most Americans, I have more important things to worry about than whether Warren Buffet or George Soros get richer. But even if I did lie awake at night fretting over income inequality, I wouldn’t count on a union revival to do anything about it.

Unions rose to power before globalization and automation had transformed economic reality. Before the internet utterly reshaped American commerce. Before the explosion of temps, part-timers, freelancers, and independent contractors who now constitute such a huge swath of the workforce. Before it became abnormal to stay with a single employer for a whole career. Before traditional workplaces — physical spaces with rank upon rank of workers — began to vanish.

In the early 1950s, manufacturing and mining accounted for one-third of all the jobs in America. Today? Barely 10 percent.

“In mining … there are perhaps 80,000 jobs today compared to over a half million — almost all of which were unionized — in the late 1940s and early 1950s,” writes Rich Yeselson for the progressive political website Talking Points Memo. “Coal provided close to 2/3rds of our energy then — making the imperious president of the United Mine Workers, John L. Lewis, one of the most powerful people in the country.”

Much the same is true of the steel industry, which now employs 70 percent fewer workers than it did in 1959. That was the year that 500,000 members of the United Steelworkers of America went on strike — the largest strike in the nation’s history.

Manufacturing is still enormously important to the US economy. It accounts for a larger share of GDP than ever. But it takes far, far fewer people to do so, making unions a far, far less important player in American life than they once were.

Private-sector unionism isn’t a sleeping giant waiting for a wakeup call. It’s more like a once-mighty prizefighter shuffling into oblivion. In its heyday, it was a force to be reckoned with. No longer.