’Tis the season for food anxiety.

That’s usually the case for me. Between Thanksgiving and Christmas, it’s not the shopping, travel plans, last-minute deadlines, or potentially tense moments with family that stress me out. It’s all the food I’ll be expected to eat at holiday gatherings — and all the side-eye I’ll get when I don’t.

I’m a picky eater. When I say “picky,” I don’t mean like a locavore or someone on a low-carb or gluten-free diet. I’m a picky eater because there’s a whole bunch of stuff I just don’t eat:

Seafood. Sauces. Soups. Stews. Cheese, unless it’s on a cracker or pizza. Any soft-textured food, such as hummus, grits, or oatmeal. Stuffing of any kind. Collard greens, brussels sprouts, cauliflower, mushrooms, squash, asparagus, okra, radishes, olives. The list goes on and on.

By any definition, I don’t have an eating disorder. I don’t binge or purge, and I don’t obsess about my weight. In fact, it’s those around me who have a disorder about my eating. 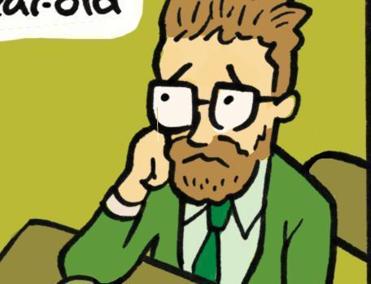 Can’t we all just get along?

A helpful guide to making civil conversation with your relatives this Thanksgiving.

This is especially acute around the holidays, when there are more parties and fancier dishes. While others ogle the offerings, I scan the platters for something I might actually eat. I usually find just enough to put together some odd plate — a piece of bread, some meat, and two cherry tomatoes rolling around the empty spaces. My friends, knowing the deal, say nothing. Yet complete strangers can’t help but critique my choices and treat me like a weirdo:

“Is that all you’re eating?”

“You should really try the stuffed shrimp.”

“Well, that’s a shame. You don’t know what you’re missing.”

Me: “Actually, I do. I’m missing the shrimp. Which I don’t like. Would you excuse me? I’m gonna get another cherry tomato.”

It’s those around me who have a disorder about my eating. Strangers critique my choices and treat me like a weirdo.

And don’t even get me started on sit-down dinners where there is no escape.

Compared with my childhood habits, my preferences today practically make me a foodie. As a kid, I even disliked steak (too chewy), sandwiches (too soggy), even hamburgers (too chewy and soggy). I spent years concocting ways to dispose of meals. No hour of my day was more fraught than dinnertime. Finally my mother, tired of wasted money and food, just let me eat canned ravioli while the rest of the family feasted on porterhouse steaks.

I don’t expect such accommodation now. Indeed, I recognize that not eating what everyone else eats upsets some unspoken social order. Food is integral to how we gather. We celebrate with food, we mourn with food. On Thanksgiving, the entire day revolves around cooking, gorging ourselves, and then sitting around and making jokes about having gorged ourselves.

Food is central to our religious and cultural holidays. During Hanukkah, there are latkes, kugel, and brisket. For Kwanzaa, most meals have African and African-American origins, ranging from Ghanaian stews to Hoppin’ John, a Southern dish with black-eyed peas and rice.

Muslims begin each day of Ramadan, a month of daytime fasting, with the suhur, a pre-dawn meal. It ends at sunset when family and friends gather for the iftar, breaking their fast. This meal traditionally begins with a serving of dates, followed by lamb kebabs or roast chicken, vegetables, and a rich dessert like baklava.

The great Roz Chast, a New Yorker cartoonist, has a classic drawing called “The Last Thanksgiving.” Around a table sit 10 glum people, each with some food issue ranging from “can’t have salt” to “ultra picky gourmet.” For me, the cartoon is funny — but also poignant, because it assumes if everyone can’t eat the same thing, there’s no point in getting together.

Food may fill our bellies, but it’s the conversations and reconnections that feed my soul at these gatherings. That’s what I remember. I might even have enjoyed the company of the stuffed-shrimp pusher if he hadn’t been so busy minding my plate’s business. Eating is the least important part of these festivities to me. I can enjoy those around me, without having to eat like them.

For years I’ve felt pressure, even shame, about my food anxieties. I’m done with that. This holiday season, I’ll attend tree-trimming parties and menorah lightings and eat what I want how I want without explanation. Let others avoid political conversations. I’ll be the one, with a plate of sauceless pasta and a side of strawberries, happily avoiding the main course.