We’re entering a new era of race relations in America — a crazy, conflicting, potentially explosive era yet to be named.

Maybe it’s an era of white insecurity about racial identity as the country moves toward a nonwhite majority. Dylann Roof, who murdered nine black people in a church, and Rachel Dolezal, who declared herself black on national television, could be two sides of that coin.

Or maybe it’s an era of increasing black confidence. What’s unprecedented about the spate of black people who’ve died in police custody is not the deaths themselves — those are sadly not new — but rather the fact that they’re being covered prominently on national news.

There’s something else notable about our conversations on race today: the disconnect between where we are in 2015 and where we thought we’d be. The half-finished project of racial equality in the United States leaves us with a parade of endless contradictions. 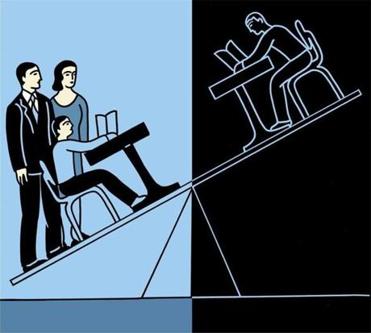 In a city like Boston, poor kids tend to go to poor schools, and wealthy kids to affluent schools.

We elected a black president. Yet we still incarcerate blacks at nearly six times the rate of whites. We’ve had not one but two black secretaries of state. Yet, a study shows that women with “black-sounding” names — like Lakisha and Aisha — still have a hard time getting hired as secretaries.

On television, the most powerful woman in the world is a black woman, Olivia Pope, who speaks her mind to the president of the United States on ABC’s “Scandal.” In real life, black women like Sandra Bland and Ersula Ore get arrested for speaking their minds to white police officers.

Where does that leave us, America? Slavery is over. Jim Crow, as our parents knew it, has ended. The civil rights movement is ancient history to kids today. Even the era of race-based remedies — court-ordered busing, affirmative action, majority-minority political districts — is fading. What happens next?

After Barack Obama’s election, some declared that we’d reached a “post-racial” age. That we’d finally given up, in the words of Chief Justice John Roberts, this “sordid business” of divvying ourselves up by race. Then we got Trayvon Martin. We got Ferguson. We got Baltimore. Today, Americans are talking more about race — and doing more divvying — than they have in years.

The thing about this new era, however, is that we don’t agree any more on what race means. In Martin Luther King Jr.’s day, everybody knew that blacks were treated as second-class citizens. Today, half the country complains that being black gets you killed, while the other half complains that it gets you into college.

In the past, stereotypes of black poverty were the problem. Today, it’s stereotypes of black success. The black faces on television today drive luxury cars. They live in the White House. Nearly 60 percent of whites believe that blacks earn the same salaries as whites. Three percent think blacks actually earn more. In reality, the median household income for whites is $54,000, compared with $32,000 for blacks and $38,000 for Hispanics, a disparity that has grown since the 1970s. Meanwhile, the median net worth of a white family is $142,000. For Hispanics, it’s just $13,700. For blacks, it’s $11,000.

Despite decades of government policies aimed at leveling the playing field, significant disparities remain. That’s a source of outrage among blacks. Yet, enough black people have climbed the ladder to wealth and influence that we have the illusion of equality. That’s left whites outraged at policies that still tip the scales in favor of one race.

Therein lies the deepest disconnect: A majority of whites don’t believe racism still exists. Or they suspect they’re the real victims of it. A study by Tufts researchers showed that most whites agree that blacks faced serious racism in the past but feel that “anti-white bias” has become the bigger problem in the past 15 years.

This is the unfinished business of the ’60s and ’70s. The most ambitious and far-reaching government effort to bring us together — court-ordered desegregation of schools — was supposed to connect us, and make us equal. Race was supposed to disappear as a salient factor in American life.

But it hasn’t. Today, most blacks in Boston still lack quality schools, while many whites still resent the government takeover of schools. The life expectancy for residents in parts of the Back Bay is 91.9 years, compared with 58.9 years in parts of Roxbury. The struggle for equality hasn’t been won. Yet many people feel exhausted. They want to declare victory (or defeat) and go home.

Over the next few months, I’ll explore how the history of desegregation shaped the era we’re living in today. But first, let’s give this era a name.

E-mail me your ideas at [email protected] or tweet them to @fstockman: #NameThisEra.

This piece is part of series of columns about Boston — four decades after busing — supported by the Sigma Delta Chi Foundation.

More on the aftermath of busing: