These words may have never been uttered by anyone on the Los Angeles sports landscape, but here goes.

As expected, Boston’s sanctioned bid to put on the 2024 Olympics deflated quicker than a bag of Tom Brady footballs, with the city and the United States Olympic Committee announcing Monday that it just wasn’t going to work.

Thank you, Boston, for giving LA yet another shot at playing host to the sporting event of a lifetime.

After short-sightedness and strange politics prevented LA from being anointed in the first place, the USOC is expected to right that wrong and give the American bid to its traditional Olympic home. LA would then be one of the favorites to defeat Paris and Rome and be selected Olympic host for the third time when it is voted upon in September 2017. 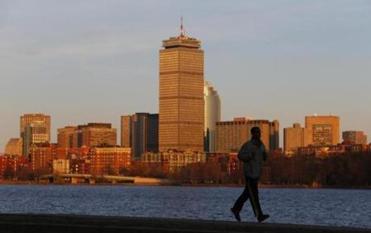 The bid elicited a citywide conversation about Boston’s future, and the challenge now is to keep that forward-looking energy going.

Thank you, Boston, for perhaps bringing the Olympics back to the only place in the world that is already built for them.

It takes most cities seven years to prepare to play host to the Games. LA can do it in seven minutes. Heck, give us a few days, we could be ready to put on the Olympics this summer.

From the Coliseum to the Rose Bowl, from Staples Center to StubHub Center, from Chavez Ravine to Angel Stadium, from the mountains to the ocean, LA can already offer the International Olympic Committee virtually every venue it demands. Somebody may need to build a big swimming pool, but doesn’t that sort of thing take place every day somewhere in Irvine?

LA is a furnished home complete with an entertainment center, gourmet kitchen, and covered parking. It’s a home that has been inhabited before, with great success, in 1984. And by the time the Games return here, it’s going to be a home with two substantial upgrades.

In 2024, there will almost certainly be a new NFL stadium somewhere in town that would be perfect for the Olympics’ opening ceremony. And there will also be a renovated Coliseum that would be ideal for track and field. To use the vernacular of a guy who would surely be one of the final torch bearers, one Kobe Bryant, those two additions make the Olympics in LA a slam dunk.

Thank you, Boston, for realizing you need to stick with Green Monsters and gray hoodies and leave the big-boy sporting events to us.

Poor “Beantown.” It never stood a chance. In January, the USOC thought it could impress the IOC in picking a city rich in history, education, and culture. Somehow, it neglected to realize it was also picking a city that didn’t want the Games and had no clue how to make them work.

Even before Boston was awarded the bid, nearly half of the population was opposed to the Olympics because of money, traffic, and just plain hassle. The most celebrated bid group was actually the one that opposed the Games, with “No Boston Olympics’’ protesters owning the cameras.

Once it was official that Boston would be America’s entrant, its chances became even more bleak. It was quickly noted that, among the many venues that would require construction, Boston did not have a place for the opening ceremony. All that stuff takes money, and Boston residents loudly and justifiably grumbled at paying it until their leaders threw up their hands and waved the white — or maybe green-and-white — towel.

The final straw was Monday when Mayor Marty Walsh refused to sign the host city contract that would make the city responsible for any cost overruns. In a place where nothing was ready and there was no support for getting it ready, that would have been a lot of overruns.

Steve Pagliuca, Boston 2024 chairman and co-owner of the Celtics, said the withdrawal was made “in order to give the Olympic movement in the United States the best chance to bring the Games back to our country in 2024.”

In other words, your turn, LA. It’s in your hands, Mayor Eric Garcetti and powerhouse Casey Wasserman. Although the USOC probably has to dance a bit for the other two US contending cities, San Francisco and Washington, it should soon confirm the enduring truth that LA is the only place this can work.

There will be the proper outcry from taxpayers not wanting to foot the bill, the same well-reasoned threats that have smartly kept the NFL at bay for 20 years. But the Olympics are not the NFL. We already have the stadiums and freeways and parking lots, and the Olympics will supply the athletes and memories. Informal polls show that 70 percent of Angelenos would support the Games because most folks know that with the existing facilities and infrastructure, their cost will be far outweighed by their economic and social benefits.

Do you still hear folks waxing about the great times, and great traffic, of the 1984 Games? Of course you do.

Thank you, Boston, for two years from now, when LA will finally be dropping those balloons and thinking of you.