By Eric Tucker and Mary Clare Jalonick Associated Press  May 01, 2019

WASHINGTON — Private tensions between Justice Department leaders and Robert Mueller’s team broke into public view in extraordinary fashion Wednesday as Attorney General William Barr pushed back at the special counsel’s ‘‘snitty’’ complaints over his handling of the Trump-Russia investigation report.

Testifying for the first time since releasing Mueller’s report, Barr said he was surprised Mueller did not reach a conclusion on whether President Trump had tried to obstruct justice, and that he had felt compelled to step in with his own judgment that the president had committed no crime.

‘‘I’m not really sure of his reasoning,’’ Barr said of Mueller’s obstruction analysis, which neither accused the president of a crime nor exonerated him. ‘‘I think that if he felt that he shouldn’t go down the path of making a traditional prosecutive decision then he shouldn’t have investigated. That was the time to pull up.’’

Barr was also perturbed by a private letter Mueller sent him last month complaining that the attorney general had not properly portrayed the special counsel’s finding. Barr called the note ‘‘a bit snitty.’’

‘‘I said ‘Bob, what’s with the letter? Just pick up the phone and call me if there is an issue,’’’ Barr said. 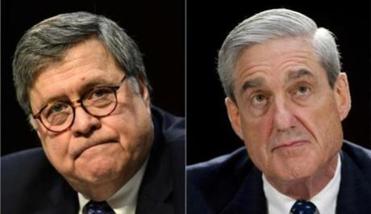 Read the letter from Robert Mueller to William Barr

The letter was released to the public on Wednesday.

The airing of disagreements over the handling of the report followed Mueller’s two-year investigation into Russian interference to help Trump in the 2016 campaign and the possibility that Trump’s team conspired with the Russians. During most of the investigation, the Justice Department and Mueller’s team seemed to be unified in approach.

Republican and Democratic lawmakers have been anything but unified. And their partisan divide was on full display during Wednesday’s contentious Judiciary Committee hearing, which included three Democratic presidential candidates.

Some Republicans, in addition to defending Trump, focused on the president’s 2016 Democratic opponent Hillary Clinton’s email and campaign practices and what they argued has been a lack of investigation of them.

As the hearing was getting underway, Trump tweeted his familiar ‘‘NO COLLUSION, NO OBSTRUCTION.’’ Though Mueller reached no conclusion on obstruction, he did report that his probe established no collusion between the Trump team and Russia.

Democrats, for their part, moved to exploit the daylight between Barr and Mueller to attack the attorney general’s credibility and accuse him of unduly spinning the special counsel’s report in the president’s favor. Some also called for Barr to resign, or to recuse himself from Justice Department investigations that have been spun off from Mueller’s probe.

They also pressed him on whether he had misled Congress last month when he professed ignorance about complaints from the special counsel’s team. Barr suggested he had not lied because he was in touch with Mueller himself and not his team.

Unswayed, Democrat Patrick Leahy of Vermont said, ‘‘Mr. Barr, I feel your answer was purposely misleading, and I believe others do too.’’

Barr sought to minimize the rift by suggesting the special counsel’s concerns were largely about process, not substance.

Barr’s appearance gave him his most extensive opportunity to explain the department’s actions, including his press conference held before the Mueller report’s release.

Barr has also been invited to appear Thursday before the Democratic-led House Judiciary panel, but the Justice Department has said he would not testify if the committee insisted on having its lawyers question him.

Neither side broke much new ground Wednesday on the specifics of Mueller’s investigation, though Barr did articulate a robust defense of Trump as he made clear his firm conviction that there was no prosecutable case against the president for obstruction of justice.

He was asked by Senator Dianne Feinstein, the committee’s top Democrat, about an episode recounted in Mueller’s report in which Trump pressed White House Counsel Don McGahn to seek the removal of Mueller on conflict-of-interest grounds. Trump then asked McGahn to deny a press report that such a directive had been given.

Senator Kamala Harris, a member of the committee and a 2020 Democratic presidential candidate, called on Barr to resign after she questioned him about his handling of the report.

What I just saw from the Attorney General is unacceptable. Barr must resign now.

Barr entered the hearing on the defensive following reports hours earlier that Mueller had complained to him in a letter and over the phone about the way his findings were being portrayed.

Mueller’s letter, dated March 27, conveyed his unhappiness that Barr released what the attorney general saw as the bottom-line conclusions of the investigation and not the introductions and executive summaries that Mueller’s team had prepared and believed conveyed more nuance and context than Barr’s own letter. Mueller said he had communicated the same concern two days earlier.

‘‘There is now public confusion about critical aspects of the results of our investigation,’’ Mueller wrote in his letter to Barr. ‘‘This threatens to undermine a central purpose for which the Department appointed the Special Counsel: to assure full public confidence in the outcome of the investigations.’’

Barr appeared unmoved by the criticism. He said repeatedly that Mueller had assured him that Barr’s letter of conclusions was not inaccurate but he simply wanted more information out. Barr said he didn’t believe a piecemeal release of information was beneficial, and besides, it wasn’t Mueller’s call to make.

Once Mueller submitted his report, his work was done and the document was ‘‘my baby,’’ Barr insisted defiantly.

‘‘It was my decision how and when to make it public. Not Bob Mueller’s.’’

Barr also complained that Mueller did not, as requested, identify grand jury material in his report when he submitted it, slowing down the public release of the report as the Justice Department worked to black out sensitive information.

Barr noted that Mueller concluded his investigation without any interference and that neither the attorney general nor any other Justice Department official overruled the special counsel on any action he wanted to take.