Walking around Boston these days, it can start to feel like someone is always trying to sell you something.

The other day I walked out of South Station — where new giant, inscrutable advertising banners are hung from the rafters every few weeks — and was greeted by an ad for diamond engagement rings plastered on the side of a wet, filthy trash can: “She Said Yes!”

I’m not in the market for a wife anymore, but even if I were ... a trash can? What are we doing here?

It’s as if we won’t be satisfied until every square inch of this city and every moment of our lives is commodified.

Party invitations from friends are actually “opportunities” to buy essential oils, yoga pants, cutting boards, or skin cream. Comcast calls me more than all my friends and family combined. 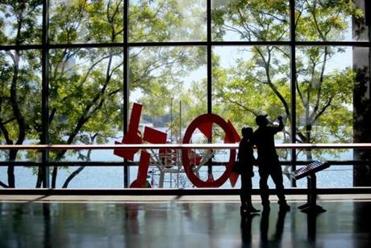 Workers say Museum of Science demoted them for not upselling visitors

A shake-up at the museum has the visitor services staff up in arms, with a recent department-wide reorganization prompting employees to voice concerns that they are being pressured into “taking as much money as possible from visitors.”

It’s enough to drive you to drink! Conveniently, we’ve now given over swaths of our loveliest public spaces, like the Greenway and the waterfront, to beer gardens. Here’s an IPA that looks like pond water, that’ll be $10.

Frankly, this stuff barely registers anymore. We live in a world where Marie Kondo, who made a fortune telling us to throw out all the junk we already bought, is now selling way more expensive junk on her website. So even talking about the extent to which our public and personal spaces are given over to commerce makes you sound like some sort of monk or hermit, foraging berries to bring back to the hollowed-out tree in which you live.

But when we reach some frightening new frontier in aggressive capitalism, the seams start to show.

Recently, the Boston-based online shopping company Wayfair managed to find that line and cross it. A comedy writer’s tweet revealed the company’s practice of calling people who’d been browsing their website, mining information about their online activity and trying to close the deal on a lamp (or whatever) over the phone.

This raises several questions. Are people really more likely to buy a lamp from a stranger on the phone? Don’t they know the whole point of online shopping is that you don’t have to talk to anyone? And how could this feel like anything other than a privacy violation?

How would you like it if the phone rang while you were reading this very column, and it was me, Nestor, from the Globe, asking what it might take to get you into a shiny new subscription? Even if I somehow sweet-talked you into giving up your CVC code, we’d both feel a little dirty about the whole thing.

So it goes all over Boston these days — even, some say, at the fabled Museum of Science, where employees told the Globe’s Katie Johnston that they were pressured to upsell visitors, pushing movie tickets and other extras under penalty of having their hours cut or jobs changed if they underperformed.

The story was troubling, and one detail was particularly harrowing: A former employee described front line workers at the museum aggressively selling tickets to graphic nature films featuring zebras being killed and eaten by lions to families with young children.

“That was hard to read, of course,” said Todd Sperry, the museum’s senior vice president of marketing and communication. He characterized the incident, which was several years ago, as a staff training failure (and not an attempt to wrestle a few dollars out of families who’d rather not watch Simba turn into Hannibal Lecter).

In an interview, Sperry and interim Museum of Science President Wayne Bouchard said the museum’s goal is to match families with the exhibitions they’ll like best. That increases the chance that they’ll come back, or buy a membership — a relationship that is a lot more valuable than wringing every dime out of people on their first visit.

“If we deliver a misfit, that’s bad service. We’re not going to see that person again,” Sperry said.

At the Museum of Science, all this is at least in service of something more than money. The museum’s stated mission is to transform the nation’s relationship with science and technology — and you might have noticed that our national understanding of science doesn’t exactly appear to be on an upward trend these days, between the anti-vaccine crowd and the climate change deniers.

If ever a nation needed its relationship with science transformed, we are that nation. But if you can’t keep the lights on, achieving the mission is going to be impossible.

“There’s this common phrase, ‘no money, no mission,’” said Larry Ladd, a consultant for nonprofits and former director of budget and financial planning at Harvard University.

But the museum, Wayfair, and everything else now dot a landscape that in total can feel awfully predatory — eager, at every turn, to hold us upside down by the ankles and shake.

Sperry said he’s sympathetic to the notion that our city feels almost totally commodified at all times. “Go to the mall if you want to be sold left, right, and center,” he said.

But where do you go when the mall seems to be everywhere, all the time?