In a terrorist attack that killed three people, caused limbs to be amputated, broke bones, and bloodied crowds with shrapnel, one invisible injury suffered by many Marathon bombing survivors is often overlooked: hearing loss and tinnitus, or ringing in the ears.

But those problems continue to haunt those who were close to the blasts that day, and who still suffer the isolation, frustration, and stress of struggling daily to hear — even as their lives have changed dramatically in the three years since the tragedy.

“People have gotten married or had children,” said Shannon Silvestri, a hearing loss peer support counselor at the Massachusetts Commission for the Deaf & Hard of Hearing. “Will they hear their child’s first words? Will they wake up when their child cries? Will they even be able to follow conversations without feeling lost?”

Silvestri was near the finish line that day and suffers from hearing loss, tinnitus, and hyperacusis, or pain from certain sounds. Now, she is helping to spearhead renewed efforts by the state, in the final year of a federal antiterrorism emergency assistance grant, to find and help survivors with hearing damage.

A 2014 study of 94 patients who sustained hearing injuries in the bombings found that hearing loss, tinnitus, and associated dizziness were pervasive ongoing problems six months later. 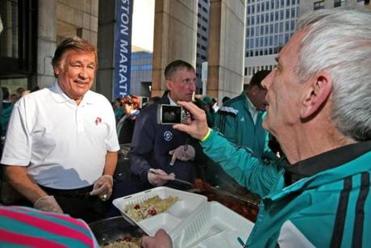 It’s not a normal Sunday dinner when the grocery list includes 3,000 pounds of pasta and 2,800 quarts of tomato sauce.

The state commission has already worked with about 100 of those injured in the blasts, providing evaluations, medical referrals, aural rehabilitation, and access to communication technology, translation services, and peer support, said Patricia Ford, deputy commissioner of program and policy for the commission.

But hundreds more who were exposed to the force of the blasts should be tested, she said — and those who have already been screened should be reevaluated, since hearing damage can be difficult to detect.

“The hardest thing is to get people to even get the evaluation, and to find out that they have a hearing loss,” Ford said. “They have no idea what is out there and what is available for them.”

Using a grant from the Massachusetts Office of Victim Assistance, the commission recently hired Stacey Walsh to bolster its outreach. Walsh spent the last several years working with Marathon bombing survivors through the Massachusetts Resiliency Center, a federally funded program to support victims.

Walsh said that for many victims, severe physical injuries and emotional trauma eclipsed hearing problems in the immediate aftermath of the bombings. Some people who sustained only hearing damage, she said, hesitated to ask for help because their injuries seemed relatively minor. Others were advised by their doctors that their hearing might return.

Yet the isolating effects of hearing damage have had a profound impact on the lives of those who experienced it, said Diane Crouse, a former case manager at the commission. Some stopped socializing with friends and family, even as they struggled to recover from their trauma. One survivor, a social service worker, had to quit her job because she could no longer understand her clients, Crouse said.

“If you are deaf or hard of hearing from a young age, you learn to live with it,” she said. “But when it’s sudden, it’s very, very devastating. . . . You can’t keep up with the conversation. You feel angry and sad and left out.”

Three years later, some survivors are only beginning to realize that they have hearing loss, she said — hearing damage can be subtle, and can change over time. Others have begun to accept that their hearing won’t come back.

On Friday, the anniversary of the bombings, the commission offered free audio screenings to survivors at Old South Church, where an interfaith service was held.

“I saw visibly people feeling validated,” Walsh said. “They knew there was something wrong and they weren’t able to put their finger on it.”

For those who seek it, help is out there, specialists said.

Hearing aids can work much better when people know how to use them properly. Devices like flashing lights can be installed at home to signal the phone or doorbell ringing. Aides can help people understand what’s being said at business meetings or other functions.

Just getting support from others who have been through the same thing can be comforting, Silvestri said.

“Who better than ourselves to help one another?” she said.

Dave Fortier of Newburyport, who was near the Marathon finish line when the first bomb went off, suffered hearing damage in both ears. He also has some trouble with balance.

A program at Massachusetts Eye & Ear Infirmary helped him evaluate his options for coping. Now he has a service dog — a labradoodle named Zealand — who helps him steady himself when he needs a little support while tying his shoe.

“ ‘Here’s a hearing aid’ isn’t necessarily the answer,” he said. “It really is learning what a new normal is, and then adapting to that.”

More coverage of the Boston Marathon: