For Rosalind Abercrombie and Nicole Xu, total strangers, the Longwood Medical Area provided a place of comfort when they needed it most, for life’s final days and its first days.

Abercrombie loves her doctors but hates being in the hospital. She’s not afraid to die, she just wants to be home with her cat, Dahlia, her adult children, and her recliner, where she can watch her favorite soap operas. And, when the time comes, she wants to be buried next to her husband at St. Mary Cemetery in Randolph.

“What she has is not curable,” says Dr. James Chang, a cardiologist with the hospital’s Advanced Heart Failure Center. “Patients with end-stage heart failure have a very poor prognosis.” 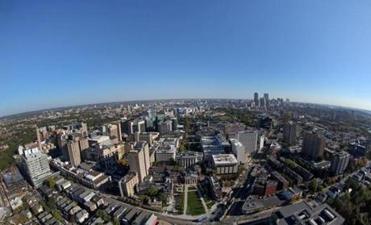 Special section: Longwood – a city within a city

Longwood is noted for its medical institutions but has an array of other facets as well.

In the past 12 months, Abercrombie had been admitted to the hospital 12 times, and spent 70 days there, surrounded by machines that monitored her heart rate, blood pressure, and blood sugar, and that dripped meds into her veins, while a catheter handled her urine. “It’s going to be so good to be home,” she said while waiting for the ambulance.

As Abercrombie prepared to go home, with palliative care in place, just around the corner from Beth Israel, Nicole Xu and her husband, Chris Anzivino, were experiencing the other end of the life cycle. The young couple was at Brigham and Women’s Hospital cuddling with their first baby who was born that same day, Oct. 20, at 9:57 a.m. His name: Brady Xu Anzivino. Yes, they are Tom Brady fans.

He arrived at 22 inches long and 10 pounds, 9 ounces. His impressive bulk was the reason the petite mother opted for a Cesarean section.

“Congratulations!” obstetrician Charissa Pettyjohn exclaimed as she hoisted the baby into the air. “Oh my Lord! I don’t need to go to the gym today!”

Because the Brigham is a renowned teaching hospital, a place where 7,500 babies were born last year, medical residents were also in the operating room. All together, 10 doctors and nurses in sky-blue scrubs and masks were on hand, including Pettyjohn, anesthesiologist Laura Chang. and pediatrician Lindsay Rosshirt.

The time from when Xu, 31, was wheeled into the room to her baby’s birth was about 35 minutes. As Rosshirt and her team took over, examining the newborn, administering antibiotics and vitamins, the beaming father cut the umbilical cord. While Xu’s incision was being closed, nurses helped position the baby on her upper chest, the better for receiving those first maternal kisses.

“I know, I know, I know,” the 35-year-old father cooed to his crying baby. “You’re OK, you’re OK.” He and his wife, who met while working on their MBAs at Dartmouth, thanked the medical team profusely. Their baby had scored an 8 out of 10 on the Apgar scale, which measures a newborn’s physical condition. “Two off for color,” a nurse said, explaining that his hands weren’t quite pink enough.

That afternoon, both sets of grandparents — Xu’s parents had flown in from their native Shanghai — visited the hospital, along with other kin. Until Xu and her baby were discharged four days later, Anzivino would not leave the hospital, spending each night in his wife’s room — all the rooms are private — on a recliner that morphs into a bed.

While Nicole Xu was happily nursing her baby at the Brigham, Ros Abercrombie was anxiously waiting to be discharged from Beth Israel. A central line had been inserted into her left arm to deliver the intravenous dopamine she would need at home to keep her heart pumping.

‘When you lose someone you love, it’s a very sad death. But when you’ve done things right, you know the last part of their life was the best it could possibly be.’ - Dr. Lachlan Forrow, director, Beth Israel’s Palliative Care Consultation Service

Two years earlier, Beth Israel’s was one of 10 pilot programs in the country in Conversation Ready, aimed at making end-of-life conversations, and wishes, its standard of care. The program is an offshoot of the Conversation Project, a public campaign cofounded by writer Ellen Goodman that seeks to have people’s wishes about dying expressed and respected.

Dr. Lachlan Forrow, director of Beth Israel’s Palliative Care Consultation Service and Ethics Support Service, knows that though few people want to die in a hospital, such conversations rarely take place between patient and provider — or even between patient and family.

But today, because of technological advances, he believes death can be more humanized, at home, than medicalized, in a hospital — and at a lesser cost.

Still, he avoids the term “good death,” which he considers an oxymoron. “When you lose someone you love, it’s a very sad death. But when you’ve done things right, you know the last part of their life was the best it could possibly be.”

In early October, Chang asked Forrow’s team to consult on Abercrombie, or “Ros,” as they all call her. Forrow, a big man with a shaggy beard and the gift of gab, rotates with two other doctors and a nurse practitioner to discuss end-of-life issues with patients and their families. The button he wears on his white coat says: “Before You’re a Patient, You’re a Person.”

To Ros, “he’s a peach.” She told him her children knew that she wanted to be buried alongside her husband, Jim, who died 16 years ago, with “How Great Thou Art” and “Be Not Afraid” sung at the service.

“That’s great,” Forrow told her. “But do they know what you want before then?”

But last January, Chang told her she probably didn’t have much time left. “You have to start talking about these things before the patient is on life support because it takes a while for the patient and family to come to grips with it,” he says. “It’s about being frank and honest but also compassionate and caring.”

A devout Catholic, Abercrombie said she isn’t afraid to die: “I think I’ll see my husband and mother again.”

And she told her medical team and her kids: “I want it to be home. I want it to be peaceful. I want it to be with Dahlia.” She lives with her son, Ron, 50, and daughter Jan, 42, in their small Randolph home. Another son, Tony, 53, lives nearby, and all three work full time.

A cook at St. Mary’s rectory in Randolph for 32 years, Abercrombie loves food. She was looking forward to Jan’s home cooking, and to eating out at some favorite spots. “I’ll tell my kids not to call 911 (in an emergency). Let’s go out to dinner instead!”

But Forrow knew that unless they made getting her home the priority, Abercrombie would die at the hospital. He and others who took care of her called a family meeting.

Jan Abercrombie knew her mother wanted to be home. But whenever Ros gasped for air, Jan, her health care proxy, felt she had to call 911, which meant an ambulance would take her back to the hospital.

But with the intravenous line and meds in place at home, along with visiting nurses, Jan thought — hoped — she would not have to call 911 again.

Sarah Porell is a social worker on a Beth Israel Deaconess project that targets those at highest risk of readmission. Abercrombie was one of them, and besides counseling, Porell dealt with her insurance and bills, and worked with Commonwealth Care Alliance, a Boston nonprofit that helps those on Medicare or Medicaid with complex medical needs.

Commonwealth Care had arranged for a hospital bed in the dining room, and Abercrombie had a motorized recliner in the living room, as she can’t climb stairs. “We want it to be peaceful and manageable, not just for Ros, but for her family,” Porell says.

Abercrombie’s heart problems trace back to her battle with breast cancer in 1997, when her chemotherapy included doxorubicin, highly effective against cancer but toxic to the heart. In 2002, she was hospitalized for the first time with congestive heart failure.

During her most recent hospital stay, details were worked out regarding what the hospital calls the 4 R’s: reach out to patients about their wishes for end-of-life care, record those wishes, retrieve them as needed, and, ultimately, respect them.

But on Oct. 20, as it turned out, Abercrombie was all dressed up with no place to go. The home health care agency had just informed the hospital that the dopamine Abercrombie needed had expired. They would get an overnight shipment, and she would go home the next day.

“Did you hear my bad news?” a tearful Abercrombie asked Forrow. He assured her that he, too, was disappointed, but that everything had to be perfect for her to get home, and stay there. And he promised to visit her there, a rarity for doctors at a big-city hospital.

The next morning, Abercrombie’s implanted defibrillator delivered a shock four different times because her heart rate was so fast. Still, she left by ambulance shortly after 3.

Her son Tony was at the house waiting for her.

“This is what she wants,” he said, as Dahlia, a black and white rescue, nestled in her basket. “My mother is at peace with dying, but if she can stay even an extra day, she’s going to fight.”

Shortly before 5 p.m., slowed by traffic, the ambulance pulled up. Two EMTs brought Abercrombie inside and helped her into her chair, dopamine pump on her lap. She pushed a remote button to recline, and another to operate the TV. Dahlia fled upstairs at all the commotion.

“Oh, this chair feels so good,” Abercrombie said. “Dahlia!” she called. Tony turned on her heating pad and went to fix her a cup of tea. She was home.

A little more than 24 hours later, she died in her sleep, “on her terms,” as her daughter put it. Three days later, Forrow visited her home, as he had promised, meeting with her children to offer sympathy and counsel. The following week, Abercrombie was buried next to her husband.

Comfort at the start

In the waning days of October, Nicole Xu was taking a crash course in motherhood. Brady wasn’t getting the nourishment he needed, and he lost 10 percent of his birth weight those first days. He was having trouble nursing, resulting in a fussy baby and frantic parents.

But not to worry. “The nurses were all great, and a lactation consultant, Laurie, came every day,” Xu says. “She calmed us down and told us it would be fine.”

At night, the couple had the option of keeping Brady in their room, or putting him in the newborn nursery. “We tried to keep him with us at first, but we reached the point where he was just crying for hours and we didn’t know what to do, so the nurses took him,” she says. “They were very, very helpful.”

The day after Ros Abercrombie died, the nurses bundled up Brady, hugged Nicole and Chris, and checked them out of the hospital. As they headed to their Back Bay apartment, the couple wondered how on earth they would do it all on their own, without the hospital staff “who were, to a person, caring, knowledgeable attentive, and patient with us for the entire week,” in Chris’s words.

For the Brigham and for Beth Israel Deaconess, it was another moment in the circle of life. A first and a final breath were taken, and there were tears, and helping hands, for both.

Longwood – A City Within a City

Bella English can be reached at [email protected].

Correction: An earlier version of this story misstated where Commonwealth Care Alliance is based. It is based in Boston.