More than a hundred patients who depend on ventilators to breathe have died since 2005 in incidents involving the machines’ warning alarms, such as caregivers failing to respond to beeps warning of a problem or setting alarms improperly so they sounded too softly or not at all.

An analysis of federal safety reports by the Globe shows that at least 119 people died nationwide between 2005 and May 2011 because of such alarm-related problems. And a

separate review by the US Food and Drug Administration uncovered about 800 alarm-related adverse events involving ventilator patients in 2010 alone. Many were deemed “preventable’’ or due to “human error.’’ An unknown number resulted in injuries or deaths.

In one case last year, after a patient was moved from a hospital’s intensive care unit and connected to a new ventilator, the equipment stopped and restarted twice, triggering warnings each time.

“There appeared to be no immediate response from the staff,’’ said the report, which did not name the hospital. Someone walking by the room heard the alarm, but it was too late: The patient died. 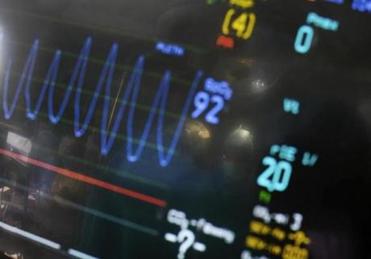 Studies suggest that patients need peace and quiet to heal, yet hospitals are some of the noisiest places around.

At another hospital, a patient in the ICU became disconnected from a ventilator for unexplained reasons. The alarm went off, but nurses later said they didn’t hear it. It turned out someone had lowered the volume. That patient also died.

The FDA is so concerned about the problem that earlier this fall it issued an alert to caregivers in hospitals, nursing facilities, and patients’ homes warning that ventilator alarms are going unheard or unattended to. The agency cautioned that nurses in particular have become too dependent on the alarms in caring for patients.

The FDA’s adverse event reports analyzed by the Globe indicate that nurses and other caregivers can become desensitized to audible warnings when they hear beeps all day long, many of them false alarms. The Globe chronicled this phenomenon, called alarm fatigue, earlier this year in a series of stories about cardiac monitors used to track the condition of patients. The new data indicate that another type of critical health care technology can suffer from the same serious shortcoming.

Alarm fatigue is a significant concern for CareFusion, a leading ventilator maker, said Don Abbey, executive vice president of quality, regulatory, and medical affairs. “It’s not an easy problem to solve at this point,’’ he said.

Even family members of patients being cared for at home can tune out alarms - or fail to hear them. About one-quarter of the 119 deaths identified by the Globe occurred in patients’ homes.

The reports described one man finding his wife dead last year, the ventilator tube dislodged from her throat. He was confused about whether the alarm was going off or not, he told investigators, because “there were always alarms going off.’’

Ora and Scott Davis live in Quincy with their son, Liam, 9, who has muscular dystrophy and requires a ventilator. They respond to alarms “constantly’’ and stay up overnight with their son when they don’t have a nurse to help, Ora Davis said in an interview. And they know firsthand how crucial those alerts can be.

One day, when Liam was 3 years old, mucus blocked his breathing tube. Her husband was vacuuming and they aren’t sure whether the alarm sounded or not, Ora Davis said. By the time they discovered he was not getting enough air, Liam had suffered a brain injury that limits his ability to move. Now, he uses a ventilator that sets off a continuous alarm - rather than the briefer warning issued by the previous model - when he needs a caregiver to clear out the tubing.

“I want to know very early if he’s having problems,’’ his mother said.

For its analysis, the Globe asked ECRI Institute, a nonprofit patient safety organization based in Pennsylvania, to use its software to search an FDA database of adverse events involving medical devices.

ECRI executives believe the number of deaths was probably higher than 119, because of underreporting by health care facilities. They are supposed to report deaths to the FDA and injuries to manufacturers, which must investigate all adverse events and report their findings to the FDA.

Of the 119 cases, manufacturers found that caregivers did not hear or respond to warnings in time in 27 instances, and improperly set or used alarms on 16 occasions. In six cases, caregivers didn’t know whether the ventilator alarm had sounded; in four, someone silenced the alarm without addressing the problem; and in 11, it was unclear what happened. In just two cases was there a clear malfunction of the ventilator.

In 53 of the cases, caregivers said the ventilator alarm did not go off. While ventilators sometimes are recalled because machines do not work properly, in many of these 53 cases, manufacturers who investigated the complaints found the alarms worked fine.

“We investigate every report thoroughly and for whatever reason a lot of times caregivers didn’t hear it,’’ said Abbey of CareFusion.

After the FDA’s review of thousands of adverse event reports, it posted a warning on its website.

“This is a reminder to folks that they have to remain vigilant,’’ Isaac Chang, director of postmarket surveillance for the FDA’s device division, said in an interview.

Alarms are clearly beneficial when they alert nurses to a serious change in a patient’s condition, but they also can “lull people into a false sense of security,’’ said Sam Giordano, chief executive of the American Association for Respiratory Care, a nonprofit professional society based in Texas.

“The alarms are a symptom, and it’s up to the caregivers to sort out whether that requires medical intervention,’’ he said. “Sometimes we overdo it and forget we’re there to watch that patient. We can’t send in alarms to replace the caregivers.’’

Patients on ventilators often have a small surgical opening in their neck and windpipe, in which the breathing tube is inserted. In some cases, patients who require a ventilator only intermittently use a face mask instead.

Ventilators sound alarms when the breathing tube has become disconnected or plugged with mucus, cutting off air to the patient; when the air pressure is too high or too low; or when the ventilator simply stops for some reason.

And, like cardiac monitors, ventilators can produce false alarms when patients roll over or cough. “It’s like the boy who cried wolf, when it’s no big deal, the response is slower each time,’’ said Dan Alt, manager of ECRI’s problem reporting system.

But failing to respond to a critical ventilator alarm can have more immediate repercussions than overlooking an alarm on a heart monitor, because it can take just minutes without oxygen for a patient to suffer brain injury or death.

Julie Leahy, whose 9-year-old daughter, Jessica, has required a ventilator since she was born with a rare nerve disorder, said when real alarms sound, patients plunge into danger fast. One recent Christmas, the Newton family was staying in a hotel room in Maine, when the alarm on Jessica’s ventilator blared in the middle of the night.

By the time her parents turned on the light, “she was already turning very blue,’’ Leahy said. “This all happened within five minutes. We looked at her and said, ‘Oh my God, she’s not getting enough air.’ ’’

The Leahys found a small plug in Jessica’s breathing tube and switched in new tubing. She was fine.

Because nurses in hospitals and nursing homes typically care for relatively few patients on ventilators, and money for long-term training is usually not in the budget, they sometimes don’t know how to properly set alarms, which Alt said is as common as not hearing or ignoring alarms.

The FDA’s alert this fall is not the first time concerns have been raised about problems with ventilator alarms.

In 2002, the Joint Commission, the national organization that accredits hospitals, issued an urgent alert to hospitals after a review of 23 patients who died or sank into a coma because their ventilators malfunctioned. It found that in 65 percent of the cases, staff didn’t respond to alarms warning that machines were malfunctioning, set alarms incorrectly, or didn’t hear alarms set at low volume.

In 2004, the commission made alarm safety a national patient safety goal, meaning hospitals had to adhere to certain standards to be accredited.

But the very next year, the commission dropped that, believing the problem had been largely solved.

Now, officials acknowledge that the problem is anything but fixed. And several lawsuits have been filed across the country, alleging that caregivers failed to respond to ventilator alarms.

One claim settled for more than $22 million against an unnamed Kansas hospital involved a 38-year-old woman who pulled out her ventilator tubing. Nurses ignored or didn’t hear the alarms, and she suffered a severe brain injury. Her attorney, James Howell of Wichita, said various hospital committees discussed the Joint Commission’s recommendations for improving alarm safety, but never implemented them.

In another case, which was settled for an undisclosed sum, a 22-year-old patient at Delray Medical Center in Florida suffered a serious brain injury that left him blind and unable to speak when his ventilator breathing tube fell out.

His nurse had left her pager on his bedside table when she left for a break, and no one else responded to the alarm for eight minutes, said his attorney, Joseph Landy. Hospital officials declined to comment.