The boys’ soccer coach at Martha’s Vineyard Regional High School has been suspended for two games and the soccer program has been assessed a range of disciplinary action as a result of two players repeatedly shoving a referee Nov. 5 after a bitter loss in the state tournament.

The punishment, delivered by the Massachusetts Interscholastic Athletic Association, follows automatic one-year suspensions of the players that took effect when they accosted the official moments after their 1-0 loss to Norwell eliminated them from the tournament.

The Vineyard’s head coach, John Walsh, must sit out the first two games of the 2020 season under the MIAA’s ruling. He and the school have the right to appeal the punishment. Attempts to reach Walsh were unsuccessful.

Sara Dingledy, the Vineyard principal, said she expects to meet with her staff Thursday to review the multiple sanctions the MIAA imposed and decide if they will appeal any.

Get Varsity News in your inbox:
Your weekly look at the top high school sports stories.
Thank you for signing up! Sign up for more newsletters here

Dingledy said her initial reaction to the MIAA’s decision was that “their ruling and their judgment seemed fair and appropriate given the circumstances.’’ 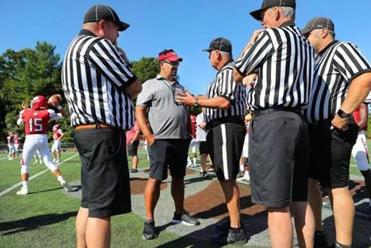 There’s a shortage of high school game officials in Massachusetts, and abusive fans are at fault

Verbal attacks and unruly behavior have contributed to a shortage of officials, who are deciding it’s just not worth it.

Mark McCarthy, the Vineyard athletic director, said he has no plans to replace Walsh, who guided his team to a 7-9-3 record this season. The Vineyarders nearly forced top-ranked and unbeaten Norwell into overtime in a first-round tournament game before Norwell capitalized on a controversial call with 15 seconds remaining and scored the decisive goal on a penalty kick.

McCarthy had previously said he had seen no evidence that Walsh or the Vineyard spectators played any role in the two players, both juniors, physically jostling the referee.

“We’ve been pretty straightforward with everybody that we take this seriously and that we’ll do everything we can to do the right thing in terms of our soccer program as well as the kids and the coaches in the program and the island community,’’ McCarthy said.

The MIAA, in addition to the suspensions, mandated that the Vineyard’s entire boys’ soccer coaching staff complete a sportsmanship compliance class as well as a coaches education course developed by the National Federation of State High School Associations.

The sanctions also require that a Martha’s Vineyard school administrator attend all the boys’ soccer team games, home and away. The school also must establish a “sportsmanship action plan’’ that involves online education courses in sportsmanship and provide education for team captains.

McCarthy indicated the school was not surprised by the education requirements.

“The education piece is basically what they’re focusing on, and that’s what we’re about: education,’’ he said. “So, I have a feeling we’ll probably do all the things they’re asking in that regard, but we need to meet as a staff first to go over it.’’

The ruling also requires Martha’s Vineyard to submit to the MIAA all yellow and red card infractions its soccer players or coaches incur in the future.

The sanctions, which were approved by a panel consisting of members of the MIAA sportsmanship, soccer, and game officials committees, also recommend that Martha’s Vineyard attend the MIAA’s annual sportsmanship summit and review its formal evaluation process for coaches.

The panel met Tuesday with officials from Martha’s Vineyard and Norwell as well as Walsh before voting to approve the disciplinary measures.

The official who was accosted told the Globe last week that he was “very shocked’’ by the incident. He said he chose to report it to the MIAA “to protect my fellow referees if they came across the same players or different people who act the same way.’’

The official could not be reached Wednesday.

The incident occurred soon after the Globe reported that national high school officials consider abusive treatment of referees an epidemic that is driving a critical shortage of game officials.

A survey by the National Association of Sports Officials last year found that 48 percent of male officials and 45 percent of their female counterparts in Massachusetts have feared for their safety because of the behavior of a spectator, coach, player, or school official.

Both Norwell and Vineyard officials noted that, despite the misconduct, there were several acts of sportsmanship after the game involving players on both teams.

“We’re proud of the kids who did the right thing,’’ McCarthy said. “Unfortunately, the emotions of two of our players got the better of them.’’

Related: There’s a shortage of high school game officials in Massachusetts, and abusive fans are at fault

Bob Hohler can be reached at robert.hohler@globe.com.
Loading comments...
Most Popular in sports
Real journalists. Real journalism. Subscribe to The Boston Globe today.