The MIAA Division 1, 2, 3, and 4 girls’ basketball state finals will be held Saturday in Worcester. Here’s a look at all the matchups.

Get Varsity News in your inbox:
Your weekly look at the top high school sports stories.
Thank you for signing up! Sign up for more newsletters here 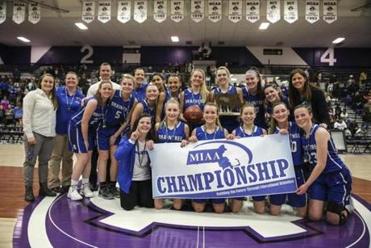 Player to watch/Braintree: Adriana Timberlake. A senior, Timberlake is Braintree’s leading scorer and has emerged as a creative playmaker this season. She had 9 points in Braintree’s 39-38 come-from-behind win over Central Catholic in the state semifinal, and is a two-time Bay State Carey Division Most Valuable Player. She had a game-high 19 points in last year’s championship game.

Player to watch/Springfield Central: Jaliena Sanchez. With 32 points in the Golden Eagles’ 64-57 win over Franklin in the state semifinals, the senior guard is an electric scorer. She’s committed to play Division 1 basketball at Weber State, and certainly wants to end her career with a state title after last year’s final, in which was held to 8 points.

The lowdown: This is the teams’ fourth meeting in the D1 final in five years, with Braintree taking titles in 2015 and 2018 and Central winning in 2017. Last year, Braintree won a thriller, 59-56. Watch for the Timberlake and Sanchez matchup on the perimeter. Braintree senior forwards Jeniyah Jones and Ariana Fay are important pieces and give Braintree grit. Selenya Gonzalez is a talented senior for Springfield Central. If Braintree can hold Central’s star guards in check, it can repeat.

Player to watch/Pentucket: Angelica Hurley. The junior up-tempo guard can take over the game by herself with quickness and basketball IQ. In the Division 2 semifinal against Pembroke, she led Pentucket with 19 points, 9 rebounds, and 5 steals. Three times, she stole a pass and went coast to coast, drawing a foul.

Player to watch/Northampton: Amanda Mieczkowski. The junior point guard, who scored 21 points in the state semifinal win over Nashoba, is the leader of the Northampton offense. Her outside game is just as good as her ability to slash to the hoop and make plays. She’s connected on a team-leading 41 3-pointers this season.

The lowdown: Pentucket has been highly motivated since letting a 20-point lead slip away to Foxborough in last year’s state semifinals. Relentless full-court pressure fuels a defense that is yielding just 36 points per game in the postseason. Senior guard Maddie Doyle is a spirited leader. For a Northampton squad vying for its first state title since 2008, Sydney Lewandowski and Kolbie Jones are going to have to be difference-makers down low.

Player to watch/St. Mary’s: Pamela Gonzalez. She scored 23 points and had nine rebounds in a 59-56 win over two-time defending state champion Archbishop Williams in the state semifinals. The 5-foot-10-inch senior has the quickness to blow by traditional post players and size to take smaller guards to the basket. She is a tremendous defender as well.

Player to watch/Hoosac Valley: Lexi Mercier. She had a game-high 22 points in a 63-42 win over Millis in the state semifinals. She averaged 17.5 points in the regular season, and is a defensive whiz, averaging nearly four steals per game. A 3-point sniper, Mercier can match a single team’s output. She’s liable to erupt for five or more in a game.

The lowdown: Both teams shoot well from long range. St. Mary’s has a bit more size, and Gonzalez has been sensational in the tourney. Hoosac Valley has played sound team basketball in its run through the West and Central, blitzing opponents with four double-digit wins and three with at least a 20-point margin. St. Mary’s has the size and athleticism to keep up.

Player to watch/Cathedral: Mackenzie Daleba. A force down low, Daleba is tough to move in the paint but can also go coast to coast in a flash. The 6-footer doesn’t back down from a challenge and can stuff a stat sheet by the half.

Player to watch/Hopkins: Samantha Jenks. The 5-foot-11-inch senior guard is the focal point of the Hopkins offense. She had 31 points in the West final and 27 in the state semis.

The lowdown: Cathedral has been operating like a well-oiled machine since the start of the playoffs, defeating opponents by an average of 31.6 ppg. Cathedral has won two of the past three state titles. Hopkins had never won a sectional title before this season, and must have success from beyond the arc.