The chant that rose from the stands was neither planned nor planted, a spontaneous chorus of support from fans who have come to understand and appreciate what this US women’s soccer team is all about. No doubt, the implicit and unabashed backing contained in the public cries of “Equal pay! Equal pay!” rewarded this American team just as impactfully as the tangible trophy held aloft in their World Cup winning hands.

By the time they heard those chants, having just defeated the Netherlands, 2-0, in Sunday’s final, total viewership of the World Cup had topped a billion people, as pure an indication as any that interest in women’s sports is neither provincial nor finite. It is an ever-expanding universe whose ripples should have lasting impact around the globe. The championship game didn’t feel like the simple end of a compelling tournament, but the beginning of a new chapter for women’s sports equality.

“Everyone chanting ‘equal pay,’ I thought that was really moving,” legal associate Amory McAndrew said from her office in New York, where she specializes in employment law in the women-owned firm of Hoguet Newman Regal & Kenney. “The support of fans is a powerful rallying cry for all women to see in the fight for equal pay. The energy around them — they’re wonderful role models to be seeking what they’re entitled to under the law, which has been the case for decades, since 1963. Maybe this will be the momentum that will have an impact in any area or any workplace.”

Only if the people in charge do the right thing.

Only if the people in charge are paying attention. 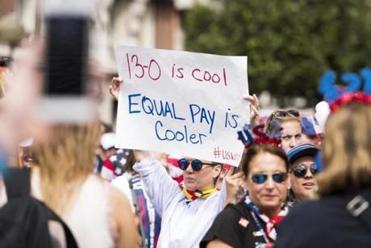 Get on the right side of history, US Soccer: Equal pay for the women’s team — now

When women are paid less than men for doing what appear to be similar jobs, why do employers insist on changing the playing field instead of leveling it?

Only if the people in charge have a desire for fairness and equality.

And if, once again, like it has in this sport since winning the first Women’s World Cup in 1991, the United States shows the way.

With their victory safely in hand, the US women now turn their (full-time) attention back to the lawsuit they filed in March, when they charged the United States Soccer Federation with gender discrimination in everything from pay structure to institutional support. Whether a decision comes through the courts or through mediation/arbitration, how could it not come down on their side? Who would want to counter this argument now, to take on a group of women not simply confident and overwhelmingly great at their skills on the field, but so competent and certain in their rights off it?

That they emerged victorious on the pitch while simultaneously carrying a torch for pay equity in the boardroom only underscores what tough competitors they are, and what formidable adversaries they promise to remain. Winning a World Cup is hard enough — even harder as each four-year cycle rolls through and other countries have raised their level of resources and abilities, and thus present greater competition. To consciously and deliberately add a layer of scrutiny over pay equity demands an awful lot of fearlessness with just a little bit of recklessness, and these American women were steeled by both.

“I think most achievements and progress in equity occur in the light of day,” said Boston-based wage equity expert Katie Donovan, founder of Equal Pay Negotiations LLC and the first to bring the impact of salary histories to the gender pay game, writing the language on salary history restrictions in the 2016 Massachusetts Equal Pay Act. “The bigger the stage, the better, because it makes it very difficult for the people not providing equity not to respond.”

“I think they had a good case and now they have a great case,” echoed McAndrew. “How could anyone now argue the US women’s soccer team is not performing equal work? They’re outperforming the men with greater revenues and better results with arguably less resources.

“I just don’t know how anybody could say otherwise.”

It’s important to note that the legal issue is with USSF and USSF only, not soccer’s international governing body and enduringly sexist haven FIFA. Under US law, where the national governing body oversees both the men’s and women’s programs, the argument should be easier to make that the male and female players are indeed comparable counterparts and thus should be treated equally.

The women have so many new arguments in their favor, from the record-breaking ratings to the eye-popping merchandising. Fox can’t send out emails fast enough or often enough touting television audiences growing by enormous percentages, including a 20 percent increase in viewership for Sunday’s final over last year’s men’s final. Meanwhile, Nike is gleefully filling its timeline boasting of the fastest-selling soccer jersey it has ever sold, the one the US women wore in France.

This wave of activism will not stop until the task is completed. Remember the 2018 Winter Olympic Games, when the US women’s hockey team won gold with a heart-stopping, nerve-shattering shootout win over Canada? Their skating was fantastic, but so, too, was their courage. That group of women was willing to give up a World Championship appearance in the fight for equal pay. They spoke of being inspired by the famous soccer ’99ers, including World Cup-winning captain Julie Foudy, who was in South Korea working as a television commentator, knowing their own actions could do the same for today’s rising female athletes.

“We’re really proud to kind of put a stamp in women’s sports history,” Monique Lamoureux-Morando told us in the mixed zone one day, “but we’re certainly not the first to do it. Julie Foudy is right there and is one of the ones who paved the way for us. We’re certainly aware of the women that have come before us and sure hope there’s a lot that come after us.”

They are right here.

They are here in Megan Rapinoe, with her Golden Ball and her Golden Boot and her outspoken veteran leadership, her willingness to absorb the slings and arrows of criticism showing how much she understands that while others are completely within their rights to disagree with her, she is also within hers to use this platform as she sees fit.

They are here in Rose Lavelle, the rising star with the ridiculous feet, whose nifty dribble-through-traffic goal was more than enough to support the early lead Rapinoe provided with a penalty kick.

They are here in Alex Morgan, whose turn in the role as the most recognizable face in the game may have been supplanted in France by Rapinoe, but whose sublime goal-scoring ability delivered the women to France as much as anyone on the roster.

They are here, and they will be heard.