Keflezighi and his wife offered the Richards hugs and prayers and asked if there was anything they could do for the family who a year earlier had lost 8-year-old Martin in the tragic bombings.

“Ever since, we kind of connected,” Keflezighi, the men’s champion in 2014, said in a recent telephone interview. “We’ve texted each other and gotten a couple emails.”

Fast forward to last year’s Boston Marathon. Keflezighi struggled and wondered to himself how charity runners do it every year.

“Usually when I’m conditioned, which my training went really well, I look forward to potentially winning or top 10, for sure, or top six,” the 42-year-old said. “But about 12 miles or 12 and a half [in], my body just gave up on me. My quads, I could feel them, they were like as flat as a pancake. They were jelly.” 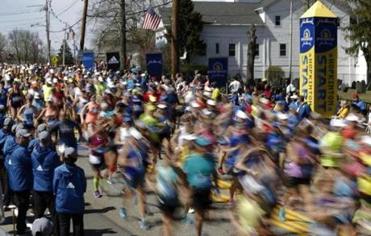 Guide to the 2018 Boston Marathon

Race details, runner and spectator information, and everything else you need to know about the 2018 Boston Marathon.

After finishing 13th in 2:17, he questioned why he had signed up for the New York City Marathon, which is run in November. Before the NYC Marathon, the Richards reached out to Keflezighi’s brother, Hawi, asking if Meb would consider running the 2018 Boston Marathon for the Martin Richard Foundation, whose mission is to advance sportsmanship, inclusion, kindness, and peace.

“I’m like, ‘Hawi, let me get through New York.’ I’m thinking it’s a great cause, don’t get me wrong, but at the same time, I was burnt out at that point. I didn’t know if I could do it. I was depleted in New York. That’s all I had. I finished. I collapsed at the end. I had no energy left.”

But after his body recovered from New York and he thought about the Richards’ request, he ultimately decided he “would love to do it.”

“It wasn’t an easy answer by any means, but at the same time, when I tell them if there’s anything I can do, and hopefully I’m a man of my words,” Keflezighi said.

“Obviously, it’s no more hurting people, peace, the image that always comes to my mind whenever I think about Martin Richard and what they have done.”

So for the first time, he won’t be counting every stride, contemplating when to make a move, wondering where he is among the elite pack. The clock will be on his mind, he’ll check his watch occasionally, but he won’t be in a hurry. There is so much about his 2014 victory he doesn’t remember, like running past Wellesley College, because he was in the zone. Not this time. He said he will try to finish in about three hours or so, soaking in the sights and sounds and celebrating life along the way.

“This time around, I can give a high five or cheer them on and soak it all in at the same time . . . the slower you go, the more you hear the words they say and read the signs. It should be fun,” Keflezighi said.

“It’s a nice way to run it and it’s an honor to wear his jersey.”