Compost. What’s not to love?

Okay, it smells bad. And yeah, it’s extra work to separate out food scraps from other trash. But there’s a hidden payoff, both financially and environmentally, to more composting, and a good reason to encourage businesses and homeowners to keep their banana peels and stale bread out of the garbage.

Basically, it’s this: With a humming economy, we’re choking on garbage of all sorts, and prices for processing trash and recycling are going up. Keeping food scraps out of the garbage reduces trash while also helping the environment (and, possibly, providing nutrients for your tomato plants).

In Massachusetts, it’s estimated that food waste accounts for about a quarter of solid waste rotting in landfills. That’s an expense. And while that garbage decays, it emits methane, a greenhouse gas that contributes to climate change. Composting can put those scraps to work, and, depending on the way it’s processed, use that methane to produce electricity.

For those with a yard, composting is easy enough: Just put your scraps in a bin and let time do its work. For renters and city dwellers, though, it’s often a trickier task. San Francisco and Portland, Ore., have mandatory composting programs, providing residents with compost bins that get picked up curbside by the city. According to a national survey, more than 5 million households had access to curbside composting collection last year, an increase of 2.4 million since 2014. 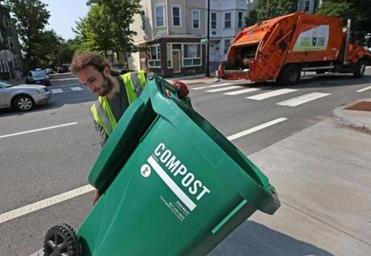 Fetid odors, yes, but less waste is going to the landfills

Cambridge’s citywide composting offers clues as Massachusetts seeks to reduce the amount of trash going into landfills. The state has fallen behind its goals.

Massachusetts has been a leader at commercial composting — that is, waste from universities, hospitals, and supermarkets — but more of a laggard on residential composting. Only 10 municipalities currently offer curbside compost pickup. Cambridge has the largest program in the state, with 25,000 households participating. Boston created a zero waste commission that will soon release recommendations, one of which is expected to be a composting program for residents.

One place to start would be to expand the net of institutions than the current commercial policy captures, by lowering the threshold from a ton to a half-ton of food scraps a week. State officials could also step up enforcement by hiring dedicated inspectors to monitor landfills more closely for compostable items and to make sure every commercial institution covered by the current policy is in compliance.

Meanwhile, Boston should be looking closely for lessons to be learned from Cambridge’s curbside composting effort. The method the city uses to process organic waste has been heavily criticized by advocates because it doesn’t achieve the full environmental gains of composting, but it could prove the most economical.

In Boston, “it’s not really a matter of getting people to buy in on the importance of composting, we just have to make it easier for them to do so,” said Boston City Councilor Matt O’Malley, who has been a vocal supporter of free curbside composting.

The economics of trash have been changing in the last couple of years, in part because of a decision by China to stop accepting so much imported recyclable waste. It’s been a rude awakening, and a reminder that trash of any sort can by costly. Composting is an easy way to reduce the waste heading to landfills and recycling centers, and Massachusetts should smell the opportunity.