It wasn’t just a yes. It was a hell yes.

For the past 88 days, Senator Susan Collins of Maine has been portrayed as a swing vote in the confirmation of Brett Kavanaugh to the Supreme Court. But by the time the Republican finished her 45-minute speech on the Senate floor Friday, she made clear she was all in on President Trump’s contentious pick. The testimony of Christine Blasey Ford did nothing to change her mind.

In fact, Collins came out swinging against special interest groups that wanted to block Kavanaugh, accusing them of “over-the-top rhetoric and distortions of his record.” She praised Kavanaugh as an “exemplary public servant, judge, teacher, coach, husband, and father” and chose to ignore the temperament issues raised by his own belligerent testimony at last week’s Senate Judiciary hearing.

In making her case, Collins could have been Senator Lindsey Graham — minus the sneer, shouting, and finger wagging. The lasting image will be Collins flanked by two female Republican Senators — Shelley Moore Capito of West Virginia and Cindy Hyde-Smith of Mississippi — providing cover for their male colleagues. In other words, the women gave permission to doubt Ford’s account of being sexually assaulted by Kavanaugh when he and she were teenagers.

In voting yes, Collins and her fellow Senate Republicans are on the brink of dealing a far-reaching setback to the Supreme Court’s standing in American life. The rush to install Kavanaugh, which cleared a key hurdle Friday and could culminate in a final vote as soon as Saturday, has become more than just a referendum on this single, deeply-flawed nominee. It’s also a depressing inflection point in the further degradation of our national political institutions. 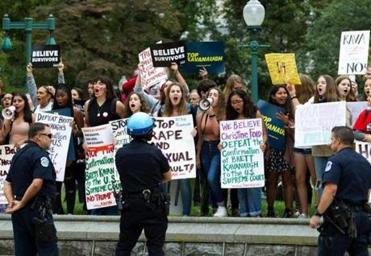 Michael A. Cohen: America loses with Kavanaugh on the Supreme Court

The court will now be seen as yet another hopelessly partisan and tribalized political institution.

Barring some last-minute reversal, Kavanaugh will be confirmed, and the Supreme Court will never be the same.

Collins, who considers herself a proponent of abortion rights, had worried about how Kavanaugh might rule on legal challenges to Roe v. Wade. Showing either stunning naivete or bad faith, the senator said she that, after speaking with Kavanaugh, she believed that he would respect the landmark ruling.

Collins seems to think that by voting for Kavanaugh, she is defending the middle, sticking up for fairness and due process, and protecting the institution of the Supreme Court. But she somehow managed to ignore all the concerns about character, integrity, and partisanship that were raised by his own testimony last week.

Unique to recent Supreme Court nominees, Kavanaugh has a long history of dishonesty, much of it politically tinged — baggage he would bring to the court if confirmed and that would cast a permanent cloud over his jurisprudence. Then there’s the partisanship. In responding to Ford’s sexual assault allegations, Kavanaugh launched a blistering, highly partisan tirade that made a mockery of judicial norms.

A single Republican senator seemed to understand that: Lisa Murkowski of Alaska, who delivered remarks on the Senate floor that laid out the stakes as she explained why she is voting no. She called Kavanaugh a “good man” but said “he’s not the right man for the court at this time.”

“I believe we’re dealing with issues right now that are bigger than the nominee and how we ensure fairness and how our legislative and judicial branch can continue to be respected,” Murkowski said. “I think we’re at a place where we need to begin thinking about the credibility and integrity of our institutions.”

The kind of polarization that produces Donald Trump, and produced Kavanaugh’s tantrum last week, is nothing new. But senators from both parties have professed concern about the country’s drift into polarization and partisanship. If they mean it, the time to make a stand and stop its spread is now, with Saturday’s vote.

To confirm Kavanaugh now, despite strong evidence of his unfitness and partisanship, will only prolong the “great disunity” Collins claims to abhor.