POPE FRANCIS has been a powerful voice for the poor. For refugees. He has eased the Catholic Church’s rigid views on divorce and homosexuality. He has insisted we take action on climate change.

All of that, and an appealing humility, have allowed Francis to assume a moral authority that was hard to imagine before he ascended to the papacy.

But now, the sexual abuse scandal that made it so difficult to conceive of a pontiff with that kind of moral authority — the abomination that’s searing the world’s conscience once again — threatens to undermine much of what Francis has built.

The pain of priestly abuse was made fresh again, last week, when the Pennsylvania grand jury released a horrific report detailing 70 years of abuse in six dioceses, with at least 1,000 identifiable victims. 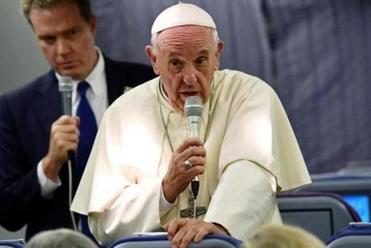 Catholics’ faith in Francis is misplaced

The pontiff took a sledgehammer to millions who’d placed saintly hope in him.

One 7-year-old girl was raped by a priest who visited her in the hospital after she had her tonsils taken out. Another priest forced a 9-year-old to perform oral sex, “then rinsed out the boy’s mouth with holy water to purify him.”

The report came after the resignation of Cardinal Theodore E. McCarrick, a former archbishop of Washington accused of sexually abusing priests and minors. And it followed sex abuse scandals in Australia and Chile.

Francis’s failure to take the Chilean victims seriously was, perhaps, the low point of his papacy. For too long, he supported a bishop he’d appointed, despite accusations that the bishop, Juan Barros, had covered up for an abusive priest.

But Francis seems to be shifting. After commissioning a 2,300-page report by Vatican investigators that documented widespread abuse in Chile, the pope summoned that country’s 34 bishops to the Vatican for a dressing-down, and in a matter of days, all of them submitted their resignations. Francis accepted three, including Barros’s. And he acknowledged his own role in the problem — “me first of all,” he wrote to the bishops.

Now, he seems to be hinting at more. This week, after the release of the Pennsylvania grand jury report, the pope wrote a letter to the world’s 1.3 billion Catholics condemning the “atrocities” committed by priests and demanding accountability.

And so, we have arrived at a turning point for Francis’s papacy. He must turn his demand into real change. The pope’s track record on this issue is mixed, and the church he oversees has repeatedly promised change and failed to deliver.

There is plenty Francis could do — build a better system for holding bishops and other high-ranking church officials accountable, for instance, and work closely with international law enforcement agencies to investigate abuse.