Last Saturday, as the House of Commons debated the latest plan for Britain to leave the European Union, more than 1 million people gathered in the streets of London to call for a second referendum on Brexit.

In Lebanon, mass protests against endemic government corruption have engulfed the streets of Beirut. In Chile, a state of emergency was declared last week after violent demonstrations against an increase in metro fares and simmering discontent over the country’s rising cost-of-living.

In Egypt, mass anti-government rallies began in mid-September and continued even as the country’s security forces cracked down on the protests with brutal force and mass arrests.

Over the last month, similar large-scale demonstrations have taken place in Indonesia, Russia, and Peru. Hong Kong has seen major protests since June against a new extradition law. And in late September, more than 6 million people around the world joined in a climate strike to call for action on the growing threat of global warming.

It’s part of a global protest movement that has led to a substantial uptick in mass demonstrations over the last decade. 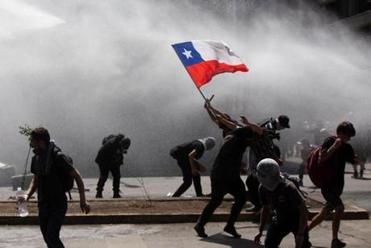 Hundreds of protesters defied an emergency decree and confronted police in Chile’s capital on Monday, continuing disturbances that have left at least 11 dead and led the president to say the country is “at war.”

Yet in America — in the four weeks since the impeachment inquiry began against President Trump — there has been nary a major gathering to demand he step down.

It’s all the stranger considering that resistance to the Trump presidency has been defined, in large measure, by massive demonstrations unlike any we’ve seen in modern American history.

The day after Trump’s inauguration, 4 million Americans took to the streets for the Women’s March. In April 2017, hundreds of thousands gathered around the country for the March for Science. In March 2018, several hundred thousand people attended the March for Our Lives demonstration in Washington, D.C., demanding Congress act to curb gun violence in America. Even earlier this year, the third annual Women’s March brought an estimated 700,000 people to the streets in more than 300 locations around the country.

So where are the protests around impeachment?

“People are sick of protesting in large-scale marches,” said Dana R. Fisher, a professor of sociology at the University of Maryland, whose new book, “American Resistance,” looks at political activism in the age of Trump. “People have become inured to the outrageousness of politics in the Trump era,” said Fisher. “The threshold is really higher to get someone to march in the streets.”

But that doesn’t mean they don’t care. “What we see instead,” she said “is people being more politically active in their communities and in their local areas.”

In the past, marches were the culmination of activist efforts, she said; now they are the jumping off point for getting people involved and engaged in politics.

It’s a view borne out in a recent study by Harvard sociologist Theda Skocpol and Leah Gose, a sociology PhD student at the school. They write that everything from Facebook groups — including Pantsuit Nation, which shifted after the 2016 election to become a tool for political organization — to the original Women’s March in 2017, has catalyzed liberal activism, particularly among suburban women, who have become the vanguard of the resistance to Trump.

According to Skocpol and Gose, “Most of the local resistance groups [we] studied have kept going,” and have continued their activities through 2018 and now, heading into 2020. As awful as Trump’s presidency has been, perhaps the most heartening response to it is a sustained groundswell of largely organic activism and political engagement, from thousands upon thousands of Americans.

Still, according to Jeremy Pressman, associate professor of political science at the University of Connecticut and codirector of the Crowd Counting Consortium, which tracks the size of protests in the Trump era, it’s a bit “strange that here’s the ultimate prize [impeachment], you can get rid of the guy. So why aren’t people out in the streets?”

Even with the mobilization and energy of the past few years, America doesn’t have the same culture of protest as in other countries. “Higher percentages of the population turn out in other countries, compared to the United States,” said Pressman. Part of the reason is that America has so many other tools to influence the political process — aside from the ballot box, there is communication with members of Congress as well as the outlet of a free press and free speech. Demonstrations are just one of many tools in the political toolbox, while in places like Egypt, Hong Kong, or Lebanon it may be the only tool.

That doesn’t make it any less frustrating to see such a lack of public demonstration over Trump’s blatant abuse of power. People flooding the streets in Cairo and Hong Kong are taking their lives in their hands while Americans are staying home.

Of course, this doesn’t mean that protests around impeachment will not occur. Meagan Hatcher-Mays, director of democracy policy for the Indivisible Project, one of the most influential grass-roots organizing groups that sprang up after the 2016 election, said that with the impeachment interviews happening behind closed doors — and public hearings still weeks away — it may not be the right time to organize mass demonstrations. But she “expects Indivisible to be organizing events in Washington, D.C., and elsewhere around the country” as we get closer to votes in the House on impeachment and a potential trial in the Senate.

It remains to be seen whether Americans will turn out in huge numbers for such events and whether the outrage-fueled movements of 2017 and 2018 can still bring progressives to the streets.

Even more of a question is whether widespread political protests will sway congressional Republicans to abandon the president. It is symptomatic of America’s debilitating political polarization that anti-Trump voters in the streets may embolden conservatives to defend the president for fear of giving the left a political victory.

There’s no doubt that millions of Americans — even the most strident Trump opponents — are worn down by the seemingly never-ending outrages that emanate from the White House. But at a moment when the president’s abuse of power could not be more evident, the voices of the American people need to be heard — in the streets. There is still time for Americans to show the rest of the world that they will gather and fight to defend their democracy against Donald Trump.