#nothingmatters — it’s the defining description of the Trump era.

Each time President Trump does something so extreme, so outrageous, so inappropriate, and so corrupt and pays no consequences for it, #nothingmatters is the shrugging shoulders, shaking head, wallowing in despair response from much of the nation.

He says that undocumented immigrants from Mexico are rapists and murderers. #nothingmatters

He mocks a reporter with a disability, insults a Gold Star mother and threatens his opponent with chants of “lock her up” if he’s elected. #nothingmatters

He urges a foreign government to hack the e-mails of his opponent. #nothingmatters 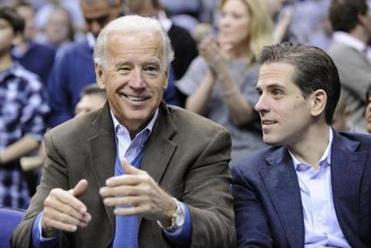 There are legitimate concerns over Hunter Biden’s business dealings.

His administration locks up undocumented migrant children in cages, separating them from their parents. #nothingmatters

He refused to condemn neo-Nazis and he uses the language of white supremacy to describe non-white members of Congress. #nothingmatters

He is implicated by his personal lawyer in a criminal conspiracy to violate campaign finance laws. #nothingmatters

He is actively and openly profiting from his presidency. #nothingmatters

He takes the side of dictators, strongmen, and authoritarian leaders — often against his own intelligence community. #nothingmatters

He lies about anything — his accomplishments, his failed trade war, the size of the crowds at his inauguration and rallies, even the weather. #nothingmatters

All of this should matter. But for four years, a coterie of cowardly politicians has ensured it does not.

During the 2016 campaign, Republicans acclimated themselves to the political benefits of Trump as their standard bearer, even as he turned their party into a haven for bigots and white nationalists. Media coverage treated his malfeasance and those of his Democratic rivals as somehow equivalent.

As president, Republicans continue to ignore his corruption and law-breaking. They have judges to confirm, taxes to cut, and Trump partisans to pacify.

When Democrats took over the House, in large measure because of popular outrage about the president, their response to Trump’s behavior has been disturbingly similar. Expressions of outrage, plenty of furrowed brows, a slow-rolled investigation process — and a steady refusal from Speaker of the House Nancy Pelosi to use the only tool the Constitution provides Congress to hold a corrupt, law-breaking president truly accountable.

Even after the blockbuster revelation that Trump pressured the Ukrainian president into investigating former vice president Joe Biden — and may have slow-rolled US military aid in order to exert leverage — Pelosi’s view on impeachment appears unchanged.

If the president can use the power of his office to pressure a foreign government into doing his domestic political bidding and if he can unlawfully block Congress from investigating the matter — and face no consequences, then we’ve reached the apex of #nothingmatters.

This is such an obvious and unambiguous abuse of presidential power — the kind of high crime and misdemeanor for which the tool of impeachment exists to punish — that there is only one option for Congress.

Yet Pelosi remains laser-life obsessed with the politics of impeachment. Beat Trump in 2020 is her focus, but how confident can any of us be about the outcome of the next presidential election if Trump is using the presidency to subvert it?

Pelosi worries impeachment proceedings against Trump will boomerang against Democrats. The 18 House Republicans who have already announced their retirement this year — some from safe seats — would suggest that not even Republicans believe the House is in play in 2020. If Pelosi’s focus is on the 31 House Democrats in districts won by Trump in 2016, her support for them is laudable but misguided. How is their political fate more important than the fate of the country? Are Democrats so mired in self-doubt that they believe they can’t win a political debate with Republicans defending a law-breaking president?

Perhaps they should consider how Trump has responded to being the #nothingmatters president. His call with the Ukrainian president – in which he is accused of pressuring a foreign government to investigate a political opponent – came on July 25, the day after Robert Mueller testified to Congress about Trump’s actions during the 2016 campaign.

Trump will keep pushing the envelope, seeing how far he can go, confident that he will face no consequences for their actions.

It’s true that if the House were to impeach Trump, the Republican-controlled Senate is unlikely to follow suit, but that’s their cross to bear — one that Democrats should use against them in their 2020 Senate campaigns.

But Republican complicity and cowardice cannot be a reason for inaction in the face of abuses of presidential power that are so explicit and dangerous.

After four years of a #nothingmatters president, something has to matter — and since we know House Republicans will continue to do nothing, only Nancy Pelosi and House Democrats can ensure that it finally does.