In the wake of the atrocious antiabortion bill signed into law in Georgia earlier this month, there has been no shortage of outrage coming from 2020 presidential candidates and women’s rights advocates. The so-called heartbeat law, which goes into effect Jan. 1, 2020, would ban abortions after cardiac activity can be detected in an embryo, or as early as six weeks of pregnancy. The law is an aggressive assault on the constitutional right to access to a safe and legal abortion.

Yet one key industry is struggling to respond to the dangerous law. Hollywood, which has found a benefactor in Georgia thanks to the state’s film tax incentives, is in a mighty position to pull its business out to protest the extreme law. Some actresses, actors, and filmmakers have called for a boycott. But, so far, the industry’s biggest stars and studios have remained strangely muted.

There should be no hesitation in an industry that has faced increased backlash for its treatment of women. Has Hollywood forgotten #MeToo and #TimesUp? In that context, it’s hypocritical for movie moguls and big studios to sit idly as women’s rights are trampled.

Not everyone in the industry is staying quiet. Alyssa Milano, who costars in “Insatiable,” a Netflix show filmed in Atlanta, led an early call to boycott Georgia. Kristen Wigg pulled out of filming her latest comedy in the state, while Reed Morano — who won an Emmy for her directing work in “The Handmaid’s Tale” — is dropping Georgia as a location for her new Amazon Studios series “The Power.” And David Simon, creator of HBO’s “The Wire” and “Treme,” said in a Tweet that his production company “will pull Georgia off the list until we can be assured the health options and civil liberties of our female colleagues are unimpaired.”

In contrast, acclaimed director Ron Howard and producer Brian Grazer said they’re moving forward with filming the movie “Hillbilly Elegy,” starring Amy Adams, in Georgia next month. But the pair, like others,warned Governor Brian Kemp they will boycott the state as a production destination if the law goes into effect next year.

It’s not hard to see why most of Hollywood is hedging. Georgia has gone to great lengths to solidify its place as one of the most generous states for movie makers, offering a 30 percent film tax credit. It’s earned the state the monikers “Georgiawood” and “Y’allywood.” The Peach State gives away more in film tax credits than any other state in the nation: about $800 million in fiscal 2017. The state says those tax breaks translated into $2.7 billion in direct spending. 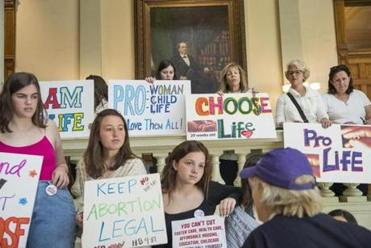 That’s how Georgia has attracted blockbuster films like “The Hunger Games,” “Black Panther,” and “Avengers: Endgame,” as well as popular TV shows like “Stranger Things” and “The Walking Dead.” In fiscal 2018, a total of 455 movie and TV productions were filmed there.

Memo to Hollywood: Ditch Georgia and come to Massachusetts. We have a film tax credit, too. More important, we do a good job protecting a woman’s right to choose and access to abortion care. (California is also realizing that progressive laws can become a competitive advantage. Lawakers there recently introduced a bill that would offer tax breaks to productions that leave states banning abortion.)

There are signs of concern among Georgia’s elected officials about the boycott spreading. Governor Brian Kempt toured a couple of movie studios in Atlanta last Wednesday to show his support and commitment to the industry.

Kempt is right to be worried. As has been proved time and again, pulling the lever of economic power is an effective tool for social change. When lawmakers in North Carolina passed a restrictive antitransgender law a couple of years ago, a widespread boycott from sports leagues and big businesses eventually lead to the revocation of the law. And Hollywood has been outspoken before — in Georgia, precisely. In 2016, Disney and Marvel Studios threatened a boycott over antigay legislation.

Perhaps the ultimate boycott will come from audiences that refuse to see productions filmed in Georgia, one of the states that wants to turn back the clock on abortion rights.