She’s a national lightning rod and genuine political phenomenon of the emerging left wing of the Democratic Party. But can she influence a local election? Alexandria Ocasio-Cortez came to town Saturday — make that the Town of Brookline — to support a friend seeking to join the Select Board.

The charismatic new congresswoman from the Bronx, who stunned American politics last year by beating a 10-term Democratic incumbent, is endorsing Raul Fernandez. It was Ocasio-Cortez’s first endorsement in a hyper-local race.

A superstar ponders the social justice of local zoning regulations? You could call her visit simply an act of loyalty. Yet there was another level of meaning to support Fernandez, who’s also from the Bronx and a friend from her Boston University days. The message is that micro-local political engagement really counts, even in a liberal bastion like Brookline. Grassroots work is one major reason why Ocasio-Cortez is where she is today.

But it’s her authenticity and remarkable talent at articulating the big picture to voters that have catapulted her to the national stage. The little picture, she says, is equally important. 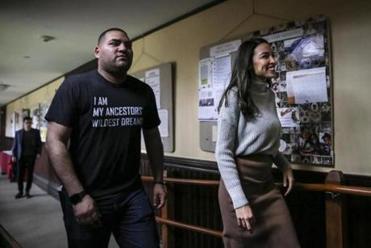 Speaking at a rally for Raul Fernandez, Alexandria Ocasio-Cortez told the crowd she is endorsing candidates for local offices in an effort to remake US politics from the ground up.

Fernandez, currently an associate dean for equity, diversity, and inclusion at BU and a Brookline Town Meeting member, would be the first Latino to join the Select Board. If he is to win on Tuesday, he will need to borrow heavily from Ocasio-Cortez’s playbook: Find voters who often are on the sidelines, not engaged. There is no shortage of those in Brookline, especially for a town election, where turnout is often in the low teens. What Ocasio-Cortez proved is politics is not a zero-sum game — if you can expand the voting pie you can march to victory. Ayanna Pressley also taught us that lesson.

To that end, Fernandez is relying on a new tool created by volunteers in Ocasio-Cortez’s campaign: an app called Reach that makes it easier to find and engage new voters outside the lists of likely voters that campaigns typically use. It proved to be key in her historic victory. Through Reach alone, Fernandez’s volunteers contacted more than 600 voters. In a micro-local election where small margins make the difference, that’s no small number.

Here’s the real challenge: Brookline is not nearly as liberal as its image. The town is predominantly white. Asians account for 16 percent of the population, while 6 percent is Latino.

Look past the veneer in Brookline and there’s a more complex reality. Both Brookline’s police and fire departments have been embroiled in issues involving racial discrimination. The public schools are bursting at the seams and there’s an override on the ballot Tuesday to expand facilities. And the town has been mired in NIMBYism when it comes to affordable housing, which has become a universal nonpartisan blight on local politics.

“Brookline is, in many ways, extremely progressive, but in some other ways it is struggling with the fact that our reputation does not match the reality,” said Jesse Mermell, president of the Alliance for Business Leadership and a former select board member in Brookline. A longtime resident of Brookline, she’s supporting another Select Board candidate, Isaac Silberberg. Mermell said that some of the most ignored voters in Brookline are renters, who represent a sizeable but transient community.

Ocasio-Cortez took it a step further, showing why her vision of inclusive politics has resonated so much all over the country. In wealthy communities like Brookline, there are “people that go unseen in the community,” she said in an interview. It’s “an underclass of service workers whose entire existence and whose entire families is rooted in service work — the housekeepers, the baristas, the folks that work in restaurants, the teachers,” she said. “It’s about being aware that it’s not just about who the people who live here.”

That’s a powerful sentiment. Still, the question remains: Are privileged, white “progressives” in Brookline truly willing to be pushed on class and race issues?