Who knows? Not me.

That’s become my standard answer to the question of what will happen in the race for the 2020 Democratic presidential nomination.

But sometimes you get an early inkling of possible trends. And so, having spent some time talking with young voters at Beto O’Rourke’s Wednesday evening appearance at the University of New Hampshire, a few observations.

Last time around, Bernie Sanders became the unlikely pied piper for America’s youth. That May-December political marriage was driven in no small part by Hillary Clinton’s role as the front-running establishment candidate. She was an eat-your-broccoli-rabe option for young voters, which made the insurgent Sanders appealing, the more so because he spoke forcefully about changing a system the young see as stacked against them.

This time around, O’Rourke could give Sanders a run for the role of favored candidate of the younger generations. O’Rourke doesn’t have the same ideological footprint, but his emphasis on climate change and gun-safety issues, including an assault-weapons ban, has obvious youthful appeal. And he has an Obama-esque ability to take an idealistic audience on a mesmerizing magic carpet ride. 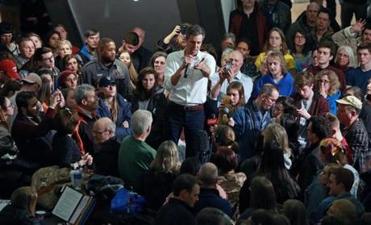 In N.H., giddy attention to Beto O’Rourke’s campaign is matched by skepticism

Much like his campaign, Beto O’Rourke’s first stop in New Hampshire Tuesday night had a thrown-together feel but still packed three floors of the Keene State College student center’s atrium.

Several of the University of New Hampshire students I talked to said they were glad Sanders had run in 2016, but were ambivalent about his 2020 candidacy. That was even the case with Maya Campbell, 21, of Burlington, Vt., who says she was active in Sanders’ campaign last time around but probably won’t support him this time.

Similarly, Lauren Dwyre, 20, a sophomore from Glens Falls, N.Y., said that though she backed Sanders in 2016, she felt the 77-year-old Vermont senator is now “a little too old” to be president.

Another thing that struck me: In a campaign with four credible female candidates — Kamala Harris, Elizabeth Warren, Kirsten Gillibrand , and Amy Klobuchar — none of the college-age women I interviewed put a premium on supporting a woman on gender grounds.

“I don’t think I would vote for someone just because she was a woman,” said Abby Barton, 22, from Sanborton.

“It is not so much about that,” said Wyleigh Chase, 18, of Barnstead, whose early inclination runs toward O’Rourke and Klobuchar. “I’m interested in having someone we haven’t heard about over and over again, maybe even a little younger.”

When I asked young voters about Elizabeth Warren, there was some low-grade worry over whether the controversy about her exaggerated claim of Native American ancestry could hurt her general election viability. A more-often-offered concern, however, was that she didn’t seem willing to compromise.

Now to O’Rourke. His message may be generically liberal, but he had the crowd of 400 or so hanging on his every word. He’s a greatly gifted speaker, crafting sentences that build, one clear clause upon another, to a powerful conclusion. Oratorically, it’s a presentation almost free of the ahs and the ums and the “likes,” and the switchbacks and shortcuts and orphaned beginnings, that characterize so much political speak.

Yes, the magic carpet ride sometimes veers conveniently away from the rocky crags about which he was queried to the smoother plains of progressive platitudes. “He kind of circles around the question,” noted one wizened political observer.

True enough. But this audience either didn’t notice or didn’t care, frequently applauding a low-calorie crescendo to the echo, such as when he answered a specifics-seeking question about the US-Palestianian conflict by noting that “dignity, safety, and security for all concerned . . . has to be our policy, and our actions have to follow suit.”

And they seemed to appreciate his professions of humility. Queried on how to decrease the demand for opioids, O’Rourke began by saying “that’s a really good question and I don’t know that I have a really good answer for you,” and ended his three-minute tour d’horizon by promising to “give it more thought.”

He’ll have to put more thought and detail into policy as the campaign goes forward; an electric on-the-top-of-the-table stump performance won’t work on the debate stage. But all that said, this is a guy with an awful lot of raw talent.