Just days after racist photos emerged from the yearbook page of Governor Ralph Northam of Virginia, it appears that he’s the only person who thinks he shouldn’t resign.

It’s rare to see a political fall so swift and unforgiving, but the pictures of a man in black face and also in KKK robes on Northam’s medical school yearbook unleashed a torrent of criticism against him.

One would be hard-pressed to find a prominent Democratic political leader who has not called for Northam to step down. But it’s the calls from Republicans — and the astonishing hypocrisy — that are too much to bear.

For example, Virginia Republican Party chairman Jack Wilson released a statement on Friday, saying “racism has no place in Virginia,” and called on Northam to “resign immediately.”

And yet, the GOP’s Senate candidate in Virginia, a mere three months ago, was Corey Stewart, who has regularly defended the Confederacy and compared those who would tear down Civil War statues of Confederate generals to ISIS. 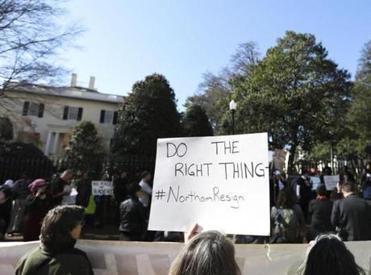 Virginia’s governor still shows no signs of stepping down

Ralph Northam met privately on Monday with top administration officials as the controversy about racist photos on his medical school yearbook page continued.

Just two weeks ago, Republicans in the state Senate paid tribute to Robert E. Lee, and Republican Senator Richard H. Stuart called him “a great Virginian and a great American.” Lee, of course, was a traitor who took up arms against the United States. State lieutenant governor Justin Fairfax, an African American and also president of the Senate, boycotted the session, which didn’t lead to any introspection from GOP leaders on the appropriateness of honoring a military leader who fought a war to maintain white supremacy of black Americans.

But Republican outrage wasn’t limited to the Old Dominion State. GOP House Leader Kevin McCarthy derided Northam’s “past racist behavior” and said that his “staying in office only poisons efforts to grow together as one nation. He should resign.”

Keep in mind that Representative Steve King of Iowa remains a member of the House Republican caucus (after years of ignoring his racist statements, Republicans stripped him of his committee seats back in January). Meanwhile, the number three ranking Republican in the House, Steve Scalise, has appeared at events for white supremacist groups and once referred to himself as “David Duke without the baggage.”

No one in the Republican Party — that I’m aware of — has called on Scalise to step down from his leadership post.

Senator Ted Cruz of Texas also has joined the calls for Northam to resign, tweeting over the weekend that “anybody who voluntarily chooses to celebrate the evil & bigoted KKK is unfit for public office.”

Guess who was the national cochairman of Ted Cruz’s presidential campaign in 2016? Steve King.

And guess who in the early 1990s was caught on film posing in front of a Confederate flag? Senate majority leader Mitch McConnell.

Finally, there’s the president himself, who took to Twitter to call Northam’s actions “unforgivable,” which is peak “Pot Calling Kettle Black.’’

I suppose we can take solace from Republicans speaking out against racism.

But it’s impossible to ignore the overwhelming cynicism and hypocrisy.

For all of Northam’s bad acts, the incident in question happened 35 years ago. There is a question to be asked as to whether Northam should be so harshly judged because of events that happened so long ago, particularly when there is such little evidence of public racism during his political career. However, the consensus view among Democrats that Northam must go has largely settled that issue.

But Republicans have no leg to stand on in criticizing Northam. They are aiding and abetting racist policies right now.

The president and GOP members of Congress have regularly attacked black football players for kneeling during the national anthem. In red states across the country, Republicans have passed voting laws narrowly tailored to disenfranchise nonwhite voters. The president consistently uses the actions of individual immigrants to denigrate all immigrants, which is the definition of racism, and the Republican Party has happily gone along. Indeed in 2017, Northam’s opponent for governor, Ed Gillespie, tried to link the Democrat to the Latino MS-13 gang by running ads with the criminal group’s slogan “Kill, Rape, Control” and fearsome images of gang members.

I have yet to hear a single elected Republican leader step back and consider how this kind of demonization of people of color and of immigrants may be feeding racist attitudes in American society.

Dumping on Ralph Northam might be an easy political hit for Republicans, but as long as they continue to tolerate racism and racists in their own midst — and refuse to clean up their own house — their feigned outrage should not be taken seriously.