But after Collins’s yes vote for Brett Kavanaugh, it isn’t just the fanciful Smith mantle that’s gone. Her carefully cultivated image of independent-minded moderate is also in tatters.

Collins was never a latter-day Smith, of course. The intrepid Smith, then a Republican US Representative, won her Senate seat in 1948 by beating the Maine GOP establishment’s favored candidate, Governor Horace Hildreth. Although most famous for her 1950 rebuke of red-baiting GOP bully-boy Joseph McCarthy, Smith had no qualms about opposing cabinet or court picks she judged unqualified or ill-suited, no matter who nominated them. During her time in Congress, Smith was an unapologetic crosser of party lines, backing parts of Franklin Roosevelt’s New Deal and supporting Harry Truman’s internationalist foreign policy.

Collins has never been that kind of iconoclast. Still, credit where it’s due: Her moderate conservative voting record renders her the Senate’s most bipartisan figure. Her August 2016 declaration that she wouldn’t vote for Donald Trump, because he inflamed prejudices by attacking ethnic and religious minorities, set her apart from many in her party. And her vote against repealing the Affordable Care Act was important to its survival.

But Collins is a late-decider rather than an early leader on most high-profile issues, a senator focused on finessing rather than fashioning public opinion. That has kept her from being a forceful voice either in her party or nationally. 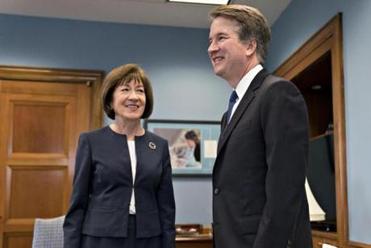 Senator Collins’s speech about Brett Kavanaugh was the coup de grace of a corrupt confirmation process.

In raw political terms, Collins, who regularly cruises to reelection, had a choice to make last week with her vote. Opposing Kavanaugh would probably have meant a tough Republican primary challenge in 2020. Supporting him will probably mean a difficult general election run against a well-funded Democrat. First District congresswoman Chellie Pingree, whom Collins beat handily in 2002, is thought to be interested in a rematch. Several other prominent figures, both from Maine and from away, are also reportedly eyeing campaigns.

To her angry liberal critics, Collins chose party over abortion-rights principle. Had she voted the other way, livid conservatives would have leveled the opposite charge. And, no doubt, labeled her a RINO.

Communications Director Annie Clark says Collins is accustomed to that sort of criticism, noting that the right was upset, and the left cheered, when her boss voted for Barack Obama nominees Sonia Sotomayor and Elena Kagan. Point taken, but because Kavanaugh could prove a swing vote on so many issues, this nomination was clearly different. That would have been true even without the sexual misconduct allegations.

In her speech on Kavanaugh and in subsequent remarks, Collins has tried to square the circle and maintain some middle ground, ground that is rapidly eroding even in Maine. She maintained that Kavanaugh’s comments to her regarding his respect for Supreme Court precedent meant he wouldn’t gut Roe v. Wade. She said she believed Christine Blasey Ford has been sexually assaulted, but not by Kavanaugh. The first seems like a credulous — or cynical — acceptance of blandishments, the second a clumsy attempt to sidestep the irreducible conflict between Ford’s accusation and Kavanaugh’s denial.

Still, more objectionable than anything Collins said was majority leader Mitch McConnell’s shabby effort to portray her pro-Kavanaugh speech as the current equivalent of Smith’s rebuke to McCarthy. That shameful framing cast those with legitimate concerns about Kavanaugh’s conduct, character, and truthfulness as modern-day McCarthyites.

Although Collins and McConnell lunched together shortly before she spoke, Clark claims Collins wasn’t aware that McConnell would be using her speech as a springboard. It’s sad that she felt no need to object once he did.

So where does that leave Collins?

In two words, politically diminished. She’s no longer the consensus senator Mainers returned to the Senate with almost 70 percent of the vote just four years ago. In rejecting Trump in 2016, Collins wrote: “Some will say that as a Republican I have an obligation to support my party’s nominee. I have thought long and hard about that, for being a Republican is part of what defines me as a person.”

With her choice last week, Collins has now defined herself as someone who will put doubts aside and fall in line when it really matters to her party.

A previous version of this column was incorrect about the year in which Susan Collins beat Chellie Pingree.