With the midterm elections hard upon us, the Republicans have come up with a novel idea to succor the nation:

Kidding. About the novelty of their approach, that is.

Tax cuts, after all, are the GOP’s solution to virtually everything. A plague of locusts besetting the land? An army of frogs settling into the nation’s houses, bedrooms, and kneading bowls? A comet hurtling toward earth?

Battle back with a tax cut! 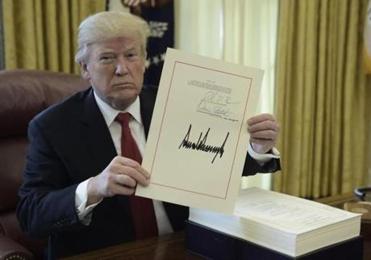 Let’s give credit where it’s due.

In this case, Congressional Republicans are proposing that the individual tax cuts passed in 2017 and slated to expire 2025 be made permanent.

These tax cuts almost certainly won’t pass this session, for a simple reason: They’d require 60 Senate votes to overcome a filibuster. Republicans got their 2017 tax cut package through by using budget-reconciliation rules, which allow a limited number of measures to pass the Senate on a simple majority vote.

So this is basically an exercise in electioneering. And yet, Republicans deserve to be taken seriously here. After all, left to their own devices, there’s little reason to doubt they’d do as they propose. Which is why this latest tax cut scheme should help frame the choice voters face in the midterms.

Consider: Even as President Trump boasts about the economy, GOP governance has put us back on the path to trillion-dollar annual deficits. Now, large budget imbalances are acceptable during recessionary times, when deficit spending helps boost the economy. But during strong economic periods, a provident nation should get its budgetary affairs in order, the better to prepare for future obligations and challenges.

But according to the Congressional Budget Office, the federal government will recross the Rubicon of $1 trillion in yearly red ink in the near future. That amounts to robbing tomorrow to please today. One reason: the increasing cost of servicing the growing national debt.

“If you look at the amount of interest that is paid on the debt, within 10 years it will be more than everything we spend on all [discretionary] domestic appropriations,” says Bob Bixby, executive director of the Concord Coalition, a bipartisan fiscal watchdog. “So just paying for the past is competing against every other budget priority.”

Spending more on interest means spending less on things like education, research and development, technology, and infrastructure, which could boost future national income.

Further, you can safely predict that conservatives will cite the budget deficits — deficits their tax cuts and spending have accelerated — as a reason the nation must cut Medicare and Medicaid.

This tax scheme should help frame the choice voters face in the midterms.

Why pass the 2017 tax cuts or propose new ones, then? Well, in the moment, Republicans gloss over the future consequences with supply-side magical thinking, pretending, contrary to the broad consensus of economists, that tax cuts will generate enough new growth and new revenue to pay for themselves.

But that’s theology, not economics.

“There is not a single credible model that shows these tax cuts come anywhere close to paying for themselves,” notes Maya MacGuineas , president of the bipartisan Committee for a Responsible Federal Budget. “They should stop feeding people that bogusness.”

But they won’t. Not as long as voters let them get away with it.

So what’s a voter to do?

One question I regularly ask political candidates is how they intend to offset the tax cuts or pay for the new spending they favor.

Will you promise not to vote for things that would make the national debt worse?

And, further, what would you do to fix that debt?

You probably won’t get many satisfactory answers, but at very least, you’ll witness some revealing exercises in circumlocution.