Tuesday night, women of color made history at the polls in Massachusetts. In stunning upsets, three black women earned the Democratic nomination in high-profile races. Perhaps just as significant, a Latina candidate also made a little bit of history in the crowded race for the Third Congressional District in Merrimack Valley.

But there was another color at play in the race for the seat to replace US Rep. Niki Tsongas — the color of money.

The outcome proved two things: even though she didn’t win the Democratic nomination, state Rep. Juana Matias far exceeded expectations as a candidate — and yet she could not overcome the reality of what money buys in a local, crowded race.

Matias overperformed in the primary, with roughly 15 percent of the vote, coming behind Dan Koh and Lori Trahan (both of whom are practically tied and a winner has not been declared yet.) No one saw that coming. The young Latina lawyer came out ahead of better-positioned and better-funded candidates like Rufus Gifford, a former US ambassador to Denmark, and state Senator Barbara L’Italien.

At Matias’s election party in downtown Lawrence Tuesday night, her strong showing was celebrated as a victory. Supporters gathered at Terra Luna and described the energy that had taken over Lawrence on Election Day. 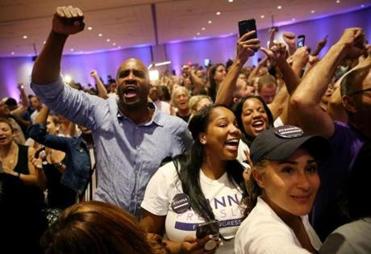 A political earthquake in Massachusetts politics

“People were telling me, ‘the first thing I did today was to vote for Juana,’ ” said Yacaira Ortega, a Lawrence resident who volunteered with the campaign. “She is such a humble person who works hard, and people saw themselves reflected in her.” Theresa Limes said there are not enough Latinas to get a seat at the table where they can elevate the voices of the disenfranchised in Lawrence. “Only the few rise to the occasion,” Limes said, as a crowd of about 40 Matias supporters waited for results to come in.

Ultimately, Matias also proved that competent Latino candidates can appeal beyond their natural base. She got more than 70 percent of Lawrence’s vote, but she also earned a number of voters outside her stronghold.

“The system isn’t built for people who come from no money,” said Matias. “People discredit you, people do not see you as viable just because you can’t raise enough money. But we proved that with the least amount of money we created a seat at the table and we were able to compete. We showed that it is possible.”

Matias’s message was simple and powerful. “People want working-class people representing them, people who understand what it is to live paycheck to paycheck. Voters want candidates who have lived their experience. Here I come from a working, poor household and I understand people’s struggle because I’m living it,” Matias said.

In the end, she raised a half-million dollars. Most pundits would agree that Dan Koh, with more than $3 million — most of it coming from donors outside the district — should have dominated the race and easily won the nomination. Instead, the race remains too close to call between him and Trahan, who raised more than $1 million. According to the latest financial filings and current vote count, Koh spent close to $170 per vote, while Gifford spent about $175. Trahan spent about $66 and L’Italien about $63. As for Matias? She spent roughly $40 per vote.

Matias’s campaign says funds were hard to come by because important donors who would have naturally supported Matias were focused on the Seventh District race, which Ayanna Pressley won in a extraordinary upset over Michael Capuano. Getting major political organizations to buy in to her candidacy as a young Latina was tough, as well. “While some political groups endorsed her, they did not put the full weight of their organization, networks, or resources behind Juana, signaling they didn’t think she had a shot,” said Emily Cherniack, founder of New Politics and a supporter of Matias. “They would all cite the polling, but everyone knew the polls were undercounting Juana! She clearly had a shot, just look at the results today.”

Tuesday night’s results in the Democratic primary in Boston and beyond, where voters overwhelmingly picked progressive women of color over establishment candidates, raise an important possibility in hindsight. What if Matias had been able to raise a little more money to spread her message beyond her core constituency?