Can Donald Trump and his supporters really be muddle-headed enough to believe that firing Robert Mueller will end the president’s investigatory problems?

Well, maybe. This president, after all, too often operates based on anger, impulse, and rumor rather than ratiocination. His avid backers, meanwhile, are cult-like in their reflexive support for his each and every action.

So let’s walk through it. Say Trump does fire Mueller. The raging controversy that would trigger would loom large over the midterm elections, with every candidate for Congress forced to take a position. Republicans would have two basic choices: Back the president’s action or support the investigation. If they opted to please the GOP base by backing Trump, that would tee up a potent issue for their Democratic opponents. Contrariwise, they could try to neutralize the issue by rebuking Trump for the firing. But having Trump denounced by members of his own party would underscore the fact that the president had done something far beyond the pale. And those Republicans who opposed Mueller’s firing would of course be asked what they would do to restore the investigation and protect it going forward — positions that would be hard to abandon later.

In August of the following year, staring at all but certain impeachment, Nixon resigned; there’s no current reason to expect a resignation here. But the turmoil could take a similar political toll. In the 1974 midterm elections, Democrats saw a gain of 48 seats in the House and four in the Senate. Should Trump order Mueller’s ouster — or otherwise move to undermine the investigation — his action would increase the odds of Democrats retaking the House and render a Senate turnover more likely as well. 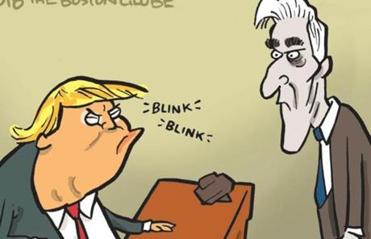 The special counsel has an idea that’s certain to move the investigation forward.

If Trump had theretofore managed to forestall the appointment of a new special prosecutor, a House led by Democrats would insist on a replacement. If the president either refused or arranged the appointment of an investigation-hobbling lackey, that would probably spark impeachment proceedings. As part of those proceedings, a Democratic House would undertake an investigation of its own. In those circumstances, it’s highly likely that damaging details of the special counsel’s findings to date would leak. Republicans who had broken with Trump on Mueller’s firing would find themselves on the hot seat over whether to support impeachment proceedings.

At best, then, Trump would probably find himself in the same position he faces now — that is, up against a special counsel — but this time, with one and possibly both branches of Congress controlled by Democrats. At worst, he could find Congress cranking up the impeachment machinery.

If the House did vote for impeachment, Trump’s fate would depend on the Senate, which sits as the jury in such an instance. Conviction takes a two-thirds Senate vote; that seems unlikely from today’s vantage point, though that calculus could change with new disclosures.

The controversy would consume much of 2019. Regardless of the ultimate outcome, those proceedings would encourage Republicans considering challenging Trump in the 2020 presidential primaries.

So: Vexing as Trump finds Mueller’s probe, if there really was no collusion between his campaign or inner circle and the Russians, and if he really has no illicit entanglements with Russia, it’s hard to see how the current situation is worse than that which would likely ensue if he fired the special prosecutor.

Why, he could arrive at the correct answer regarding Mueller with one simple question: Is he in a better situation today than he would have been if he hadn’t fired James Comey?