When the Iran nuclear agreement was concluded more than two years ago, many questioned whether Tehran would live up to its terms. Incredibly, now it’s our continued compliance that’s in question. If the president pulls the United States out — either by failing to certify Iranian compliance without clear evidence of violations or by making a clean withdrawal — he will trigger a crisis that will significantly increase nuclear dangers.

A nuclear-armed Iran would be a threat to the region and the world and must never be allowed to happen. The 2015 nuclear agreement is foundational for preventing this outcome, not an enabler as President Trump and others have suggested. If the United States walks away from our obligations, Iran could walk away without notice. To understand the stakes, it’s important to be clear about what this agreement accomplished and what we would lose if the United States causes the deal to collapse.

First, we would lose important restrictions on Iran’s nuclear activities. As a physicist involved with the US nuclear weapons program for decades, I know what it takes to build a nuclear bomb. As the principal negotiator of the final Iran deal nuclear provisions, I know that its 159 pages of unprecedented detailed requirements are a significant barrier to prevent Iran from building a nuclear weapon. Without the agreement, restrictions that effectively block every potential path to an Iranian bomb for more than a decade would vanish. We would lose stringent limits that have already reduced Iran’s stockpiles of enriched uranium by 98 percent, kept uranium enrichment at or below 3.67 percent, reduced the number of installed centrifuges by two-thirds and limited their technology. We also would lose prohibitions that keep Iran from producing significant amounts of plutonium, require all spent nuclear fuel to be sent out of the country, and prevent any kind of research or development that could contribute to a nuclear weapons program.

Second, we would lose critical visibility into Iran’s nuclear activities. The agreement imposes unprecedented inspections by the International Atomic Energy Agency to provide continuous eyes and ears on Iran’s nuclear activities to detect covert weapons activities. The monitoring covers every stage of Iran’s nuclear activities with the most robust inspections and verification protocol ever negotiated with any country. Prominent scientific leaders well versed in nuclear weapons technologies declared that the agreement is a model that could “serve as a guidepost to future nonproliferation agreements.” Inspections and verification provide the best assurance we can have about whether Iran is using a peaceful nuclear program to conceal work to develop a weapon. Without the agreement, the IAEA will no longer have assured access to any suspicious location. The United States would also lose the ability to review, and potentially reject, any nuclear-related purchases Iran seeks to make.

When the agreement was finalized, some asked why we would agree to a “temporary agreement,” noting that not all the restrictions were permanent. The simple answer is that we didn’t. While some restrictions on enrichment and nuclear activities sunset between 2026 and 2031, the most important aspects of the agreement remain in perpetuity — a permanent prohibition on Iran having a nuclear weapon or a nuclear weapons program, and continuous comprehensive inspections. Under this agreement, we retain all options today and in the future to respond to any move by Iran to develop a nuclear weapon and have much better information to act on. Statements claiming that the agreement somehow automatically makes Iran a nuclear weapons state after 10 or 15 years are absurd.

Third, we would lose a streamlined process for getting the support of other nations to quickly reimpose tough sanctions through the UN Security Council should Iran seriously breach the agreement. Sanctions would not be our only option, since there is nothing in this agreement that prevents the United States from taking military action if there is evidence that Iran is developing a nuclear bomb. 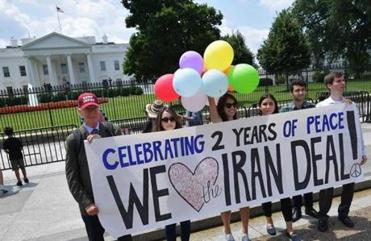 We’re about to see whether Trump applies his buck-stops-with-Congress approach to the Iran nuclear deal.

The criticism of the deal fails to put forward anything better. Some point to what it doesn’t address — Iran’s support for Hezbollah, its missile program, its regional ambition, and its support for the murderous regime in Syria. There is a long history of negotiating nuclear agreements with countries that have diametrically opposing views to the United States — there is no better precedent than President Reagan negotiating nuclear agreements with the Soviets as we contested them in many other arenas. That said, there is nothing that precludes us and our allies from addressing issues outside the nuclear agreement with Iran now, and indeed addressing all of these issues without this agreement would be much more dangerous if Iran had nuclear weapons. Just look at the situation in North Korea. Instead of ripping apart the Iran nuclear agreement and starting from a dangerous scratch, Trump should focus on strengthening prohibitions against nuclear weapons for all countries, including Iran.

When we entered into the Iran agreement, Iran stood only a few months short of a nuclear weapon, and if diplomacy had failed, only military options could have hoped to stall their path. We froze the program to allow for a diplomatic solution and we got one, comprehensively verifiable, and scientifically and technically sound. This was not just a diplomatic achievement, but an extraordinary joint effort by responsible countries to remove an urgent danger to peace and stability. For the United States to now turn its back on this deal would be more than an embarrassment, it would be an unconscionably perilous act.

Ernest J. Moniz is chief executive officer and cochairman of the Nuclear Threat Initiative. He served as US secretary of energy from 2013 to January 2017.
Loading comments...
Most Popular in opinion
Real journalists. Real journalism. Subscribe to The Boston Globe today.