Is white racism a kind of toxic cloud that drifts over our country, invisible to many or most white-skinned citizens but terrifyingly visible to the black and brown-skinned? We may believe — with good reason — that we are not racists; but does our passivity or indifference to the racism of others make us their enablers? It is stunning to learn that hundreds of millions of dollars are paid out annually in court settlements to victims of police brutality or misconduct — and these millions are paid by taxpayers. In effect, unwittingly, yet not altogether innocently, we are all supporting police brutality and misconduct.

In the late 1990s, while I was being driven back home to Princeton from a literary event in New York City, a New Jersey state police vehicle stopped the car. It was not evident why; the driver had not been speeding or driving erratically, and there was nothing wrong with the Lincoln Town Car.

Two state troopers demanded that the (black) driver show them his driver’s license and the auto registration. They then ordered him to get out of the car. What I could hear of their interrogation was repeated questions: Where are you going? Where do you live? Whose car is this?

No doubt accustomed to being harassed by white law enforcement, the driver answered the questions in a quiet and courteous voice. Yet the officers kept repeating the questions, as if they had some reason to suspect that the driver was lying. Seeing me in the back seat, they walked the driver away from the car, along the shoulder of the highway, and proceeded to interrogate him for what seemed like a very long time — 40 minutes? By this time I had called my husband on my cell phone and told him about the situation — “I don’t know when I will get home,” I remember telling him.

I do remember opening the door of the limousine, thinking that I would stand outside, but one of the troopers yelled angrily at me: “Get back inside that car, lady!” 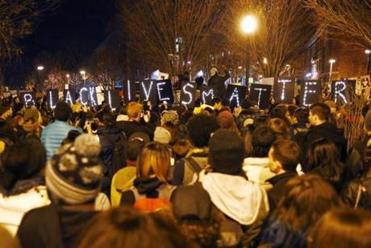 Michael P. Jeffries: Ferguson must force us to face anti-blackness

It is about the debasement of black humanity and utter indifference to black suffering.

How naive it seems to me now to have imagined that I might have been a more helpful witness to what was obviously, in retrospect, a flagrant example of police profiling. At the time, I did not even have a cell phone that could record anything; it was a very minimal phone, indeed. And I have to confess, what I felt when the trooper yelled at me was sheer visceral fear, dread — there was no way, there is no way, that a lone individual can stand up to law enforcement officers who are not only armed but, usually, physically domineering. Out on the Jersey Turnpike, in the dark, as traffic rushes past, no one can assert his or her rights to the police without inviting immediate retaliation.

Yet perhaps, just the presence of a white person in the car protected the driver from what could have been a worse experience. It is not difficult to imagine similar scenarios that escalate into police shootings of unarmed citizens — black or brown-skinned, mentally ill, homeless; the victim allegedly “reaches into his pocket” — “lunges for an officer’s weapon” — “makes a threatening gesture” — and the police respond with excessive force.

And so, the driver of the limousine, by speaking very courteously to the state troopers, and seeming to placate their profiling, was not harmed. I think that he was not even given a ticket. After some time, he was allowed to return to the car and drive to Princeton. I tried to ask him about the experience, and to commiserate with him, but he was clearly shaken, and did not want to talk. And when I called the limousine service the next morning to ask if they knew anything about the incident, it seemed that no one knew about it. Except for being vividly imprinted in my memory, and no doubt in the memory of the driver, nothing more came of it.

In planning my latest novel “The Sacrifice,” which is set in a fictitious New Jersey postindustrial city on a river in 1988, yet in the aftermath still of the devastating Newark riot of 1967, I wanted to dramatize as intimately as possible the lives of black citizens who are hemmed in, harassed, and intimidated, and sometimes much worse, by white law enforcement. Though the novel was suggested by the infamous Tawana Brawley case of 1987, it is not actually about that case, in which a young black girl claimed to have been imprisoned, raped, beaten, and threatened by white police officers, but was not in fact imprisoned, raped, beaten or threatened at all. In “The Sacrifice,” the young girl is a victim of sexual violence and she is indeed threatened — except we are not sure by whom, at least initially. That the media will make so much of a case of no substance, while ignoring countless cases of actual police brutality, suggests a tacit complicity with racism. Excited interest is directed toward the hoax, and the claims of genuine suffering might be undermined.

The specter of white racism hovers over the lives of these individuals — “fictitious” but, to the novelist, achingly real. It is a way of bearing witness if only at a remove, through the shared sympathies of fiction.

Joyce Carol Oates is a visiting writer at Stanford University. Her new novel is “The Sacrifice.”

• Justin Ellis: Ferguson yet another example of how America fails minorities

• Jeff Jacoby: Racism as a political factor has largely disappeared