WASHINGTON — President Trump on Wednesday misrepresented words from Representative Ilhan Omar to make her sound like an Al Qaeda sympathizer and exaggerated the performance of the economy under his watch.

A look at claims from his rally in North Carolina:

THE FACTS: This is not at all what the Minnesota Democrat said. She did not voice pride in the terrorist group.

Trump is referring to an interview Omar gave in 2013. In it, she talked about studying terrorism history or theory under a professor who dramatically pronounced the names of terrorist groups, as if to emphasize their evil nature. 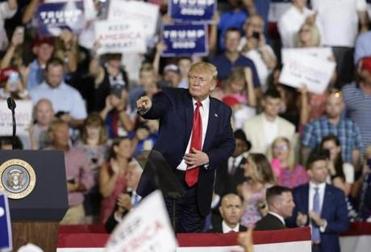 ‘Send her back!’ Trump supporters find a new rallying cry

The reaction was split, even in Boston: some are outraged, others are overjoyed by the president’s latest polarizing act.

‘‘The thing that was interesting in the class was every time the professor said ‘Al Qaeda,’ he sort of like — his shoulders went up’’ and he used a menacing, intense tone, she said. Her point was that the professor was subtly rousing suspicions of Muslims with his theatrical presentation, while pronouncing ‘‘America’’ without the intensity he afforded the names of terrorist groups.

At no point did she say ‘‘Al Qaeda’’ should be uttered with intensity or pride and that ‘‘America’’ shouldn’t.

Trump is continuing to assail Omar and three other liberal Democratic women of color, challenging their loyalty to the US. The House rebuked him Tuesday for his ‘‘racist comments.’’

Trump: ‘‘We are offering plans up to 60 percent cheaper than Obamacare.’’

THE FACTS: The bargain health insurance plans Trump talks about are cheaper because they skimp on benefits such as maternity or prescription drug coverage and do not guarantee coverage of pre-existing conditions.

The short-term plans the Trump administration began offering last year on the federal insurance marketplace provide up to 12 months of coverage and can be renewed for up to 36 months.

Premiums for the plans are about one-third the cost of fuller insurance coverage. The health plan offerings are intended for people who want an individual health insurance policy but make too much money to qualify for subsides under the Affordable Care Act.

The Trump administration introduced the short-term plans, which undermine how ‘‘Obamacare’’ is supposed to work, after failing to repeal much of President Barack Obama’s health care law.

Trump: ‘‘Patients with preexisting conditions are protected by Republicans much more so than protected by Democrats, who will never be able to pull it off.’’

THE FACTS: Democrats did pull it off. Obama’s health care law, the Affordable Care Act, requires insurers to take all applicants, regardless of medical history, and charge the same standard premiums to healthy people and those who had medical problems before or when they signed up.

The Trump administration is pressing in court for full repeal of ‘‘Obamacare.’’

Trump and other Republicans say they’ll have a plan to preserve protections for people with pre-existing conditions, but the White House has provided no details.

Trump: ‘‘We have the strongest economy in history.’’

THE FACTS: The economy is not the strongest in the country’s history. It expanded at an annual rate of 3.1 percent in the first quarter of this year. That growth was the highest in just four years for the first quarter.

In the late 1990s, growth topped 4 percent for four straight years, a level it has not yet reached on an annual basis under Trump. Growth even reached 7.2 percent in 1984.

In fact, there are some signs that growth is slowing, partly because of Trump’s trade fights with China and Europe. Factory activity has decelerated for three straight months as global growth has slowed and companies are reining in their spending on large equipment.

Most economists forecast the economy will expand at just a 2 percent annual rate in the April-June period.

Trump is pushing the Federal Reserve chairman, Jerome Powell, to cut short-term interest rates to shore up the economy. That isn’t something a president would do during the strongest economy in history.

Economists mostly expect the Fed will cut rates, either at its next meeting in July or in September. Lower rates make it easier for people to borrow and buy new homes and cars.

The economy is now in its 121st month of growth, making it the longest expansion in history. Most of that took place under Obama.

The economy grew 2.9 percent in 2018 — the same pace it reached in 2015 under Obama — and simply hasn’t hit historically high growth rates.

Trump: ‘‘The lowest unemployment numbers ever.’’

THE FACTS: Again, not so.

The 3.7 percent unemployment rate in the latest report is not the best in history. It’s near the lowest level in 50 years, when it was 3.5 percent. The US also had lower rates than now in the early 1950s. And during three years of World War II, the annual rate was under 2 percent.

Trump: ‘‘The best unemployment in our history. And likewise, women, 74 years. ... I’m sorry, women, I let you down, it’s not in our history but we’re going to be there very soon.’’

THE FACTS: No, the jobless rate for women of 3.1 percent in April was the lowest in 66 years, not 74, and it has since increased to 3.3 percent in June. The data only go back 71 years, so 74 years isn’t a possibility.