With the addition of New York City Mayor Bill de Blasio to the 2020 race, there are a total of 24 major candidates (depending on who you count as “major”) in the hunt for the Democratic nomination to face President Trump.

Amid such a crowded field, it might seem like anyone can run for the White House. Indeed, according to the Federal Election Commission, hundreds of candidates have filed paperwork to seek the Democratic nomination.

Interested in joining the pack? First thing’s first: Are you a natural-born US citizen? It’s a constitutional requirement to run for president, meaning that you must have been born in the United States or born abroad to a US citizen parent. Next: Are you 35? That’s the minimum age set by the Constitution.

Of course, there’s a lot more to it than that. Here are the steps to become a candidate for commander in chief:

To legally raise and spend money as a presidential candidate, you’ll need to file paperwork with the federal government. You can set up an exploratory committee with the Federal Election Commission, allowing you to raise money for the purposes of “testing the waters” for your campaign. Or, you can skip straight ahead to filing a statement of candidacy with the FEC. This designates a campaign committee to raise and spend money on your behalf. 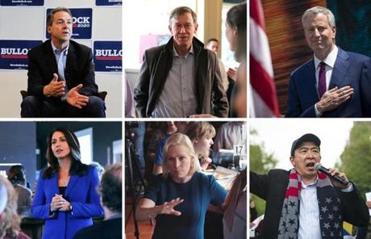 With so many options, potential voters struggle to keep Democratic candidates straight

Another day, another Democrat throws a hat in the ring, and voters ask, now who?

Raise money for your campaign

A modern presidential campaign costs hundreds of millions of dollars. That’s a lot of cash, and candidates must be mindful of where it comes from.

There are restrictions on who can contribute and limits to how much they can give. For example, a campaign can only receive $2,800 from an individual per election. And super PACs — which can raise and spend huge sums of money with few restrictions but are legally not allowed to coordinate with campaigns — are a political landmine in the 2020 Democratic primary, with many candidates swearing them off.

Alternatively, you could try the grass roots, raising money from many small donors, as Senator Bernie Sanders has done effectively. That has its own pitfalls, though, especially if you don’t have the campaign infrastructure to reach a massive pool of donors.

Don’t forget about federal reporting requirements: You’re required to tell the FEC (and by extension, the public) how much your campaign has raised and spent every quarter.

In addition, campaigns are required to itemize and identify donors that gave more than $200.

You’ll need lots of people to help spread the word about your campaign, especially in the early primary states. Bad news: You’re behind on this, as many candidates have already set up large organizations in key states. At the end of March, Senator Elizabeth Warren had 164 people on staff, making her campaign operation the largest by far, BuzzFeed reported. Senator Bernie Sanders followed with 86 people.

You’re late to this, too. The 2020 hopefuls have already held hundreds of events in New Hampshire, according to NECN, which tracks candidate visits to the state. Representative John Delaney is alone responsible for 91 of them, according to the cable network. A recent Suffolk/Globe poll found that already about one in five New Hampshire Democrats have attended an event for a 2020 candidate.

Selfies are the new handshakes. Today’s candidates pose with thousands of people as they make their way around the campaign trail. Warren recently boasted that she had taken 20,000 selfies with voters since the start of her campaign.

Get other people to say publicly how great you are. Vice President Joe Biden was ready with a few endorsements from influential people and groups on the day he announced his candidacy.

Get on that debate stage

The Democratic National Committee has outlined a series of benchmarks candidates must hit to appear at major debates. The rules were meant to give an equal shot to the unwieldy field of candidates. To get on stage, you’ll need at least 1 percent support in three DNC-approved polls, or 65,000 unique donors, with 200 unique donors per state in at least 20 states. The DNC has also set up tiebreakers in the event that more than 20 candidates meet these thresholds.

Get on the ballot

All that work to get your campaign up and running won’t mean much if you’re not on the ballot. Requirements to access the ballot vary by state and can include tasks like filing paperwork, collecting signatures, and paying fees — all on a series of deadlines. Getting on many ballots in a short span of time can be a logistical challenge.

For example, in Massachusetts, candidates can get on the primary ballot in a few ways: Gather 2,500 voter signatures, certified by elections officials; be placed on the ballot by the secretary of the Commonwealth; or be designated by the state party committee. And in 2016, Massachusetts was just one of 11 states that held a primary on March 1. That’s a lot of moving pieces.

Of course, the field of candidates typically whittles itself down well before the first votes are cast (The New Hampshire primary, for example, will probably be scheduled for February 2020). Candidates who are not raising much money, gaining much traction in polls, or gathering many endorsements eventually suspend their campaigns and throw their support behind a preferred rival.