WASHINGTON — The Trump administration’s surprise decision to press for a court-ordered demolition of the Affordable Care Act came after a heated meeting in the Oval Office on Monday, where his acting chief of staff and others convinced President Trump that he could do through the courts what he could not do through Congress: Repeal his predecessor’s signature achievement.

Mick Mulvaney, the acting White House chief of staff and former South Carolina congressman, had spent years in the House saying that the health law should be repealed, and his hand-picked head of the Domestic Policy Council, Joe Grogan, supported the idea of joining a Republican attorneys general lawsuit to invalidate the entire Affordable Care Act.

That suit, and the Justice Department, initially pressed to nullify only the part of the law that forces insurance companies to cover people with pre-existing medical conditions as well as a suite of health benefits deemed “essential,” such as pregnancy and maternal health, mental health and prescription drugs.

But a district judge in Texas ruled that the entire law was rendered unconstitutional when Trump’s tax law brought the tax penalty for not having health insurance to zero, and the administration faced a choice: Stick with its more limited intervention or back the judge’s decision.

Trump has touted that he has kept his promises, Mulvaney and Grogan argued, and as a candidate, they said, he campaigned on repealing the health law. His base of voters would love it. Besides, they argued, Democrats have been campaigning successfully on health care, and Republicans should try to take it over themselves. This could force the issue. 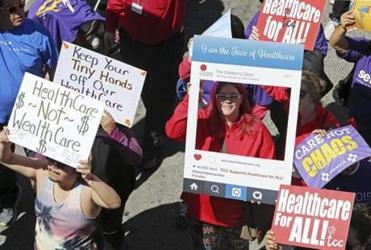 The administration had previously said that the law’s protections for people with pre-existing conditions should be struck down.

Among those with concerns was Pat Cipollone, the White House counsel, who shared that it was opposed by the new attorney general, William Barr. Vice President Mike Pence was concerned about the political ramifications of moving ahead without a strategy or a plan to handle the suddenly uninsured if the suit succeeds.

That meeting was followed by a smaller one, where Mulvaney and Cipollone were among those voicing different opinions. But Trump had been sold, and on Monday night, the Justice Department issued a statement saying it supports the Texas judge’s decision.

On Wednesday, Trump doubled down on his support for the Texas suit while talking to reporters in the Oval Office.

“If the Supreme Court rules that Obamacare is out, we’ll have a plan that is far better than Obamacare,” he said.

White House press aides did not immediately respond to a request for comment. And one official, who asked for anonymity to speak about the meetings, insisted that Mulvaney had simply been convening people with various views so that the president could make his own decision. But Mulvaney was described as leading the charge to back it in an account of the two meetings that was described by a half-dozen people with knowledge of what took place.

Politico first reported that Mulvaney pushed Trump to get involved in the suit.

Barr did not favor the move but did not object to the White House decision once it had been made, people familiar with what took place said. And one White House official said that the administration faced a deadline imposed by the court if it wanted to support the suit.

But the decision to thrust Trump’s administration directly into the lawsuit caught several people inside the White House by surprise, and took the focus off what was arguably the best weekend of the Trump presidency after the delivery of the report by special counsel Robert Mueller. Mueller, according to a letter by Barr, found no evidence of criminal conspiracy between the Trump campaign and the Russian government.

Trump did not seem to care about shifting the political focus toward an issue that Democrats far preferred to the aftermath of the Mueller report. He charged ahead at a Senate Republican luncheon, telling reporters as he went in, “Let me just tell you exactly what my message is: The Republican Party will soon be known as the party of health care. You watch.”

But Republicans in Congress have no obvious road forward on legislation to replace the Affordable Care Act that could pass the Democrat-controlled House. And House leaders have little political incentive to bow to Republican wishes on health care, an issue that they believe delivered their House majority and that they are eager to campaign on in 2020.

The Trump administration has tried to minimize and contain the Affordable Care Act over time. The president has been in favor of previous efforts to end the act. But the internal debate about the current suit also highlights a growing chasm between Mulvaney and Cipollone, according to administration officials. Mulvaney has built up over time his internal political capital, and he has grown his team of personal loyalists with new staff members.