It was meant to be a victory lap for President Trump to tout the Senate and gubernatorial gains that Republicans made in Tuesday’s election.

But Wednesday afternoon’s press conference quickly devolved into a war of words with reporters who were hungry to ask the president questions on a variety of issues.

Trump had particularly nasty words for CNN’s Jim Acosta, who said he wanted to challenge a statement Trump made during the midterm campaigns.

And by Wednesday night, Acosta was barred from White House grounds, with Sarah Sanders providing a statement that ratchets up the Trump administration’s feud with CNN. 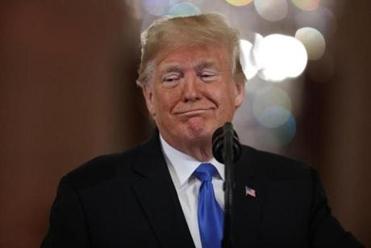 At the afternoon press conference, when Acosta started to ask Trump about his comments calling a migrant group marching toward the southern US border an “invasion,” Trump said that’s what he still considers it.

Trying to make sense of Tuesday night? Here are a few takeaways

After some more back and forth, Acosta noted that the caravan is still hundreds of miles away from the US.

“You know what, honestly? I think you should let me run the country. You run CNN. And if you did it well, your ratings would be much better,” Trump said.

Trump then asked Acosta to put down the microphone before briefly stepping away from the podium.

“CNN should be ashamed of itself having you working for them,” Trump said, wagging a finger at Acosta. “You are a rude, terrible person. You shouldn’t be working for CNN.”

“I think that’s unfair—” Acosta started to reply, before Trump cut him off again.

“You’re a very rude person. The way you treat Sarah Huckabee is horrible. . . You shouldn’t treat people that way.”

Trump then turned his attention to NBC’s Peter Alexander — who immediately jumped to Acosta’s defense.

“In Jim’s defense, I’ve traveled with him and watched him, he’s a diligent reporter,” Alexander said.

“Well, I’m not a big fan of yours either,” Trump said, as some people in the audience laughed. “You aren’t the best.”

Acosta then stood up again to try and ask another question, prompting Trump to order him to “just sit down, please.”

“When you report fake news, which CNN does a lot, you are the enemy of the people,” Trump told Acosta.

CNN released a statement shortly after saying the network stood behind Acosta.

“This president’s ongoing attacks on the press have gone too far. They are not only dangerous, they are disturbingly un-American,” the statement said.

Later Wednesday night, Acosta tweeted that he had been denied entrance to the White House. He said the Secret Service told him that he couldn’t enter White House grounds for his 8 p.m. CNN appearance.

I?ve just been denied entrance to the WH. Secret Service just informed me I cannot enter the WH grounds for my 8pm hit

Press Secretary Sarah Sanders, in a statement, provided information on why Acosta was denied access:

“President Trump believes in a free press and expects and welcomes tough questions of him and his Administration. We will, however, never tolerate a reporter placing his hands on a young woman just trying to do her job as a White House intern. This conduct is absolutely unacceptable. It is also completely disrespectful to the reporter’s colleagues not to allow them an opportunity to ask a question. President Trump has given the press more access than any President in history. Contrary to CNN’s assertions, there is no greater demonstration of the President’s support for a free press than the event he held today. Only they would attack the President for not being supportive of a free press in the midst of him taking 68 questions from 35 different reporters over the course of an hour and a half – including several from the reporter in question. The fact that CNN is proud of the way their employee behaved is not only disgusting, it is an example of their outrageous disregard for everyone, including young women, who work in this Administration. As a result of today’s incident, the White House is suspending the hard pass of the reporter involved until further notice.”

At the news conference, when another reporter shouted a question a few minutes later, Trump asked her to sit down.

RELATED: These Mass. women made waves on Election Night

PBS Newshour’s Yamiche Alcindor also asked Trump about his remarks on the campaign trail in which he called himself a “nationalist,” noting that some people saw it as emboldening white nationalists.

“I don’t know why you’d say that. That’s such a racist question,” Trump said to Alcindor, who is black.

“There are some people who say the Republican Party is seen as supporting white nationalists because of your rhetoric,” Alcindor said.

“I don’t believe that,” Trump continued, adding, “Why do I have my highest poll numbers with African-Americans? . . . That’s such a racist question.”

His response: "That's a racist question."