The “20/20” interview was Comey’s first since Trump fired him last May. While ABC only aired an hour of the interview — which ran ahead of Monday’s release of Comey’s book, “A Higher Loyalty” — Comey and Stephanopoulos reportedly spoke for five hours.

The complete transcript of the conversation is full of details — specifically several poignant metaphors of how Comey views Trump.

Here are three things Comey compared Trump to during the interview.

Comey claims that at the beginning of Trump’s term, the new president told him, “I need loyalty.” Comey instead promised him “honesty,” since he said a loyalty oath between the president and FBI director crosses a line. Comey agreed the alleged actions were in line with those of a mob boss, and said he doesn’t make that claim lightly. 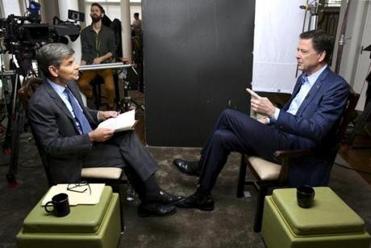 The former FBI director called the president a serial liar who treated women like “meat,” and described him as a “stain” on everyone who worked for him.

“I’m not trying to that, by the way, suggest that President Trump is out breaking legs and, you know, shaking down shopkeepers,” Comey said, according to the ABC transcript. “But instead, what I’m talking about is that leadership culture constantly comes back to me when I think about my experience with the Trump administration.”

Comey previously worked for the US Attorney’s Office in New York from 1987 to 1993, during which time he helped prosecute the famous Gambino crime family in New York.

Trump, Comey suggested, is a danger to the country — similar to a wild blaze.

“I liken President Trump in the book to a forest fire. Going to do tremendous damage,” Comey said. “Going to damage those important norms. But a forest fire gives healthy things a chance to grow that had no chance before that fire.”

When asked how the country can “put it out,” Comey said the country’s citizens need to get involved and can’t become “numb to the fact that the truth is being assailed every day.”

Comey and Stephanopoulos spoke in-depth about what makes an ethical leader, and when tough leadership becomes detrimental.

Comey didn’t have an answer to that question, instead deciding that it is an individual choice for everyone.