WASHINGTON — If there was any chance that President Trump and James Comey could have avoided all-out war, it ended Sunday night.

That was when ABC News aired an interview with Comey, the president’s fired FBI director, as he uses a publicity blitz for his searing tell-all memoir, “A Higher Loyalty,” to raise the alarm about the dangers he says Trump poses to country.

While ABC aired one hour of its conversation with Comey, it had conducted a five-hour interview with him, a transcript of which was obtained by The New York Times. In it, Comey called Trump a serial liar who treated women like “meat,” and described him as a “stain” on everyone who worked for him.

He said a salacious allegation that Trump had cavorted with prostitutes in Moscow had left him vulnerable to blackmail by the Russian government. And he asserted that the president was incinerating the country’s crucial norms and traditions like a wildfire. He compared the president to a mafia boss.

“Our president must embody respect and adhere to the values that are at the core of this country,” Comey told ABC’s chief anchor, George Stephanopoulos, on the program “20/20.” “The most important being truth. This president is not able to do that. He is morally unfit to be president.” 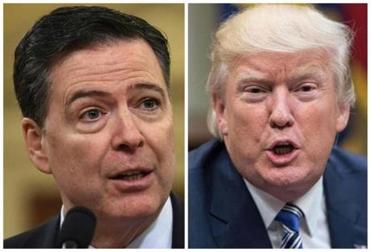 Trump lets loose with a hurricane of a tweet storm

President Trump railed against former FBI director James Comey, he defended saying “Mission Accomplished!” and he worried whether “Attorney Client privilege is now a thing of the past.”

The interview with Comey and the publicity tour for his book, which is scheduled to hit bookstores Tuesday, amount to a remarkable public assault on a sitting president by someone who served at the highest levels in the government.

The stakes for both men could hardly be higher. Comey seems likely to be the star witness in any obstruction of justice case that might be brought against the president by Robert Mueller, the special counsel in the sprawling Russia investigation. Trump’s legal fate, as well as his political fortunes in Washington, may depend on whether he succeeds in undermining the credibility of Comey and the law enforcement institutions he views as arrayed against him.

While many of Trump’s critics believe that the proper remedy for his perceived transgressions is impeachment, Comey insisted that would just “let the American people off the hook.” He said the public was “duty bound” to vote Trump out of office in the next election.

“You cannot have, as president of the United States, someone who does not reflect the values that I believe Republicans treasure and Democrats treasure and independents treasure,” Comey said. “That is the core of this country. That’s our foundation. And so impeachment, in a way, would short-circuit that.”

Comey’s intensely personal attacks — a reflection of his self-righteousness, his detractors say — are all the more combustible because they are aimed directly at a president who has said with pride on Twitter that “when someone attacks me, I always attack back...except 100x more.”

As if on cue, hours before the interview aired, Trump called Comey a “slimeball” for the second time in three days, saying in a pair of early-morning Twitter posts that he belonged in jail for what the president said were lies to Congress and leaks of classified information. In another post, Trump said Comey would go down in history as “the WORST FBI Director in history, by far!” He added that “he is not smart!”

In the ABC interview, Comey had kinder things to say about Trump’s brainpower, saying he did not think the president suffered from mental incompetence or was in the early stages of dementia. He said Trump struck him as a person of “above average intelligence.”

But Comey responded to the president’s Twitter posts with a more subtle dig of his own.

“My book is about ethical leadership & draws on stories from my life & lessons I learned from others,” he wrote on Twitter. “3 presidents are in my book: 2 help illustrate the values at the heart of ethical leadership; 1 serves as a counterpoint.”

It is unclear where this epic battle of wills will lead, other than a sustained escalation of insults between two men who have each admitted to having outsize egos. But it is certain to be a test of powerful forces in the modern media landscape: the presidential megaphone, amplified by 50 million Twitter followers, and the global reach of an adversary who is on a seemingly endless, 24-hour, cable-news-driven book tour.

The president took a break from his attacks on Comey as he left the White House on a rainy Sunday afternoon to spend time at Trump National Golf Club in Sterling, Virginia. But it seemed likely that he and his allies would not back down in the face of Comey’s barrage of public accusations, which are expected to continue for weeks.

On ABC’s “This Week” on Sunday morning, Sarah Huckabee Sanders, the press secretary, unloaded on Comey, calling him a “self-admitted leaker” and a liar. At the White House on Friday, she had called him a “disgraced partisan hack” and a fired employee trying desperately to “rehabilitate his tattered reputation and enrich his own bank account.”

Comey was similarly unrestrained in his ABC interview, speaking with the abandon of a man who finally feels unleashed. He repeated for the cameras some of the assertions from his book that he must know will get under the president’s skin: that Trump’s hands are “average-size,” that his skin is “orange” and that he seemed shorter than Comey had imagined he would be.

“His tie was too long, as it always is,” Comey said. “He looked slightly orange up close with small white half-moons under his eyes, which I assume are from tanning goggles.”

Comey described in vivid detail the interactions he had with Trump, including meetings and phone calls about which he said he meticulously wrote down notes afterward for posterity. (In another Twitter post Sunday morning, Trump said that Comey’s “’memos’ are self serving and FAKE!”)

Some of the most startling assertions by Comey revolved around his first meeting with the president-elect at Trump Tower just days before the inauguration. That day, intelligence officials, including Comey, briefed the incoming president on Russia’s attempt to meddle with the election.

Comey said Trump and his aides seemed interested only in what the former FBI director called the “PR and spin” about the issue.

“The conversation, to my surprise, moved into a PR conversation about how the Trump team would position this and what they could say about this,” Comey said. “I don’t remember any questions about, ‘So what are they going to do next; how might we stop it? What’s the future look like? Because we’ll be custodians of the security of this country.’ There was none of that.”

“It was all, ‘What can we say about what they did and how it affects the election that we just had?’” Comey said.

It was at the end of the meeting that Comey said he asked to speak to Trump alone to brief him on the salacious “Steele dossier,” which contains unverified allegations about Trump, including a claim that the Russian government has video recordings of him watching prostitutes urinate on one another in a Moscow hotel room in 2013.

Comey said Trump denied the allegations that day, saying, “Do I look like a guy who needs hookers?” Weeks later, in a telephone call after the dossier was published by BuzzFeed, Trump again denied the account in graphic terms, Comey said.

“There’s no way I’d let people pee on each other around me,” Trump said, according to Comey’s account. Comey said the president also raised the idea that the FBI should investigate the claim as a way of proving that it never happened. Comey said he warned Trump that doing so would add to “the narrative” that the president was under investigation.

Comey said in the interview that he did not know whether the episode had taken place, or whether the Russians had material they could use to blackmail Trump.

“I think it’s possible. I don’t know,” Comey told Stephanopolous. “These are more words I never thought I’d utter about a president of the United States, but it’s possible.”

Hallmarks of a mob boss

Comey also offered additional details about the one-on-one dinner at which he says Trump demanded his loyalty.

“And I said, ‘You will always get honesty from me,’” Comey said. “And he paused and then he said, ‘Honest loyalty,’ as if he was proposing some compromise or a deal. And I paused and said, ‘You’ll get that from me.’”

That dinner felt like a mob initiation of sorts, Comey said in the interview, similar to the ones he often came across as a young prosecutor working to break up the mafia.

In one of his Sunday Twitter posts, Trump insisted that “I never asked Comey for Personal Loyalty. I hardly even knew this guy.”

As he does in his book, Comey largely kept a distance in the interview from the Russia investigation. But he said Trump must have known that it was improper to ask his other top aides to leave the Oval Office so he could privately ask Comey to drop the investigation into Michael Flynn, his just-fired national security adviser.

“If he didn’t know he was doing something improper, why did he kick out the attorney general and the vice president of the United States and the leaders of the intelligence community?” Comey said.

“It’s certainly some evidence of obstruction of justice,” he said, though he added that a prosecutor would need to evaluate “other things that reflected on his intent.”

The president has repeatedly criticized Comey for his handling of the Hillary Clinton e-mail case. On Sunday, he did so again in a Twitter post, claiming that Comey had admitted in his book that he went easy on her because he thought she would win the election.

In fact, Comey said the opposite in his book, acknowledging that he may have unconsciously assumed she would win when he reopened the e-mail investigation just days before the election, something that many Democrats believe was devastating to her campaign.

In the ABC interview, Comey said he believed at the time that it would be extremely damaging to the credibility of the FBI if the reopened investigation did not come to light until after Clinton had won the White House.

“If I ever start considering whose political fortunes will be affected by a decision, we’re done,” he said. “We’re no longer that group in America that is apart from the partisans, and that can be trusted.”