WASHINGTON — His vivid tales of Oval Office meetings have captivated Washington. His writings — contemporaneous memos from meetings with President Trump — are Exhibit A in an investigation into potential obstruction of justice. His forthcoming book is generating epic amounts of buzz.

But long before he became a best-selling author, former FBI director James Comey was an aspiring news reporter and columnist for his college paper, where he tested his abilities as a provocateur who could trigger debate over heated subjects of the day.

The topics he tackled on the Virginia campus of the College of William and Mary in the early 1980s were sometimes quite substantial: He wrote penetrating articles about the need to attract more black students to the school and called for greater attention to the issue of campus rape.

But in other opinion columns for the paper, called The Flat Hat, he betrayed a certain cockiness, a level of ambition that some in Washington might recognize today. And the tone of his musings sometimes was, to be blunt, sophomoric. He wrote in defense of his native New Jersey, he complained about the need to get his bicycle registered with the police department, and he mocked “brownnoses.” He devoted an entire column to how good-looking the women were at William and Mary, comparing them to those at a certain school to the north.

“Girlwise, Harvard is desolate,” he wrote, reflecting what he said was a friend’s impressions. “There is very little grass in Harvard Yard; the coeds (we use the term loosely) ate it all. A large number of Harvard undergraduate men are unaware that the school went coed fifteen years ago.” 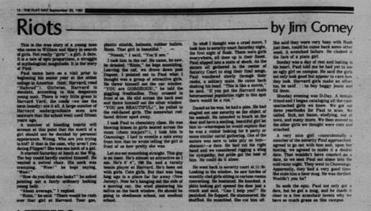 In some opinion columns, the man who would become the FBI director wrote in a tone that sometimes was, to be blunt, sophomoric.

The column was told through the eyes of a visiting friend, a varsity tennis player at Harvard he identified only as Paul, who came to Virginia one weekend in search of female companionship. “Let me set something straight,” Comey wrote. “This guy is no loser. He’s almost as attractive as I am.”

The column was headlined “Riots” because, Comey wrote, Paul said that if even the average looking women from William and Mary made an appearance at Harvard, there would be riots.

“He said the girls not only look good but appear to care how they look,” Comey wrote. “Harvard girls make an effort too, he said . . . to buy baggy jeans and fill them.”

Comey was unavailable to comment, according to a spokeswoman for his publisher, Flat Iron Books, which is set to release “A Higher Loyalty: Truth, Lies, and Leadership’’ on April 17. Comey did discuss his foray into student journalism in a 2014 interview with his college paper, in which he said he enrolled at William and Mary after being rejected by Harvard, Princeton, and Amherst.

“My first hugely important article was about parking for football games,” Comey said in the 2014 interview. “It was silly, but I was very excited about it. I did news until I was a junior and then . . . started writing a column.”

He said he styled himself after legendary New York Times columnist Russell Baker, trying his hand at satire with perhaps predictable results. “I tried to be funny and a social commentator. At least I thought I was,’’ Comey said.

Comey spent three years writing for the paper and became a member of the Society of Collegiate Journalists. A Globe review of his 19 articles, six columns, and two editorials show some sparks of serious work, but his failed attempts at humor — laden with snobby stereotypes — also stand out.

He praised New Jersey, while getting in some digs about the culture at his Virginia-based college: “People go out to eat at places besides Seven-Eleven and Hardees in Jersey. There is culture, public television, and cocktail parties. There is more entertainment than stock car racing and Mid-Atlantic Championship Wrestling. Nobody says, ‘Well, SHEET, I ain’t got no idear.’ ”

His fellow students remember him as a rising star who also tackled some thornier subjects, such as affirmative action, sexual harassment, and campus rape.

As Comey headed into his senior year, top staffers recruited him to become the editor-in-chief, but he turned them down.

“He was a pretty well-respected guy. And well thought of. And a great writer,” said John Bloom, the paper’s top editor during Comey’s junior year. “l liked to get his stories because they were interesting and error-free. Which I can’t say about most writers in college.”

At the start of his junior year, Comey wrote a three-part series on why the college struggled to attract black students and faculty members. “William and Mary has many traditions,” Comey wrote. “One of them, said a black undergraduate, is as a ‘bastion of lily White supremacy.’ ”

The series sparked controversy largely over several prominent quotes from Vernon Edmonds, a tenured sociology professor who argued that some of the black students “would not be at William and Mary if they were white, and are actually taking the places of qualified white students.”

“Dr. Edmonds is one of a group of social scientists nationwide who believe in the strong possibility of a genetic intelligence gap between races,” Comey wrote. “He contends that ‘a gap’ exists between blacks and whites that has not been ‘closed’ in the past ‘seven decades’ and ‘will not be closed in the next seven.’ ”

Comey noted that most social scientists disagree and consider the data that Edmonds used to justify his views to be “fatally flawed and inconclusive.”

After an uproar from students and faculty, Comey was forced to defend himself over the series, specifically disavowing Edmonds’s views but still arguing that it was important to consider how claims about a genetic intelligence gap played into the debate.

“The purpose of the series, like that of any news analysis, was to research and present the subject matter in an objective, balanced way,” he wrote. “I do not agree with Professor Edmonds’ views. They are intelligently presented by him, however, and are crucial to the issue of affirmative action.”

During his senior year, after a campus rape in which the female victim came under criticism because she was drunk, Comey asked to write an editorial on it. Kathleen Shears, the paper’s co-editor, agreed.

“The incident is tragic and disturbing. It is not rare,” Comey wrote. “Students hear about similar incidents all the time; some girl gets drunk at a party (usually with the encouragement of male guests) and is ‘used’ by one or more guys. ‘Used’ is not the correct term. ‘Raped’ is. ‘Sexually assaulted’ is.”

He urged the victims to seek counseling and other assistance and the campus to be more compassionate.

Comey that year also offered some lighter advice to his fellow seniors in the Class of 1982, in a column about “The Real World.”

“So now I can look forward to jumping into the Real World and car-pooling with misanthropic, combative, two-legged, unread, filthy-handed businessmen clad in wool overcoats,” he wrote.

Within a few years, he joined the US attorney’s office for the Southern District of New York, embarking on his path to the top job at the FBI.