Tropical Storm Barry is forecast to make landfall late Friday night or early Saturday across the Gulf Coast. It’s not the wind that is the main concern; once again, we have one of those very slow-moving tropical entities which will produce massive amounts of rainfall over a long duration.

There’s an outside chance that some areas could see more than two feet of rain. This would be devastating.

We seen this before across portions of the Gulf Coast. A storm can be categorized as merely a tropical storm or a minimal hurricane, but can leave behind extensive damage and disrupt lives across a wide swath.

While we have had a relatively tranquil spring and summer, water levels across the Mississippi River are at very high levels for the time of year. Typically the Mississippi around the New Orleans area is between 6 and 8 feet; presently, it’s a whopping 16 feet. That’s why officials are so concerned.

The map below shows an example of just how large of an area is forecast to receive significant flooding. Some areas around New Orleans are protected by levees, but if there’s enough water the levees can be breached, as they were during Hurricane Katrina in 2005. 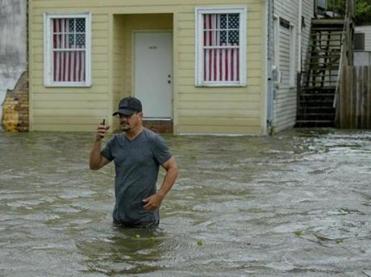 New Orleans was spared the worst effects early on, but officials warned that Barry could still cause disastrous flooding across a wide stretch of the Gulf Coast.

The rain may reach New England, but even if not we could still feel an impact as oil production is affected across the Gulf of Mexico. It looks as if the moisture from the system will end up in the middle of the country early next week. Whether or not a system coming down from Canada can capture this moisture and bring it into New England remains questionable. If we are going to see the moisture it would be late next week or early next weekend.

We are only six weeks into hurricane season, and there is still plenty of time left for systems to form, and of course New England always might be affected.