Are they people or symbols? And if they’re both — which they are — what do we owe to each?

You’ve seen the photograph by now, and if it doesn’t break your heart you might want to ask yourself why. An overhead shot, taken from the top of a bank overlooking the Rio Grande, at two corpses face down in the water.

They are the bodies of Óscar Alberto Martínez Ramírez and his 23-month-old daughter, Valeria. They, along with Valeria’s mother, Tania Vanessa Ávalos, were Salvadoran immigrants seeking asylum in the United States. Unable to cross the international bridge, they decided to test the waters separating Matamoros, Mexico, from Brownsville, Texas.

Reports of what happened have varied: According to The New York Times, Valeria was being ferried on her father’s back when they were carried away by the waters near the US shore. Ávalos had swum back to shore and watched them drown. According to other media accounts, the father and daughter initially crossed safely, but when he returned to help Ávalos, the frightened girl jumped back into the water after him, and as he tried to rescue her, the two were swept away together.

The photograph was taken by Mexican photojournalist Julia Le Duc, and it instantly lodged in a terrible hall of fame, one that includes a naked Kim Phúc fleeing a napalm strike in Nick Ut’s 1972 photo and Nilüfer Demir’s shot of a drowned Syrian toddler, Alan Kurdi, on a Turkish beach in 2015. These are not “classic” images. They are evidence of desperation and inhumanity. 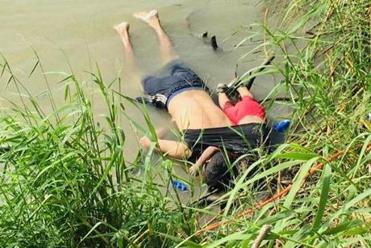 The devastating photograph of the Salvadoran man and his 23-month daughter face down in the Rio Grande’s muddy water has captured national attention.

Such photographs generate instant controversy in the digital age, when all sides of an argument can be voiced with nuance or at top volume, and often both. The arguments can have to do with how sorry a viewer is supposed to feel for the victims; in this case, anti-immigrant partisans are saying such people as Óscar Ramírez bring calamity upon themselves, while others point to the larger political and policy measures that back families like his into corners.

It’s the children, the blameless innocents, that make these images inviolable and irresistible, that turns them into both semiotic weapons and clickbait. “This is the photo that encapsulates the cruelty of the Trump era,” wrote Zack Beauchamp in Vox. It is the shorthand immediacy of an image like this that renders it a speechless op-ed column and causes it to be snapped up by news bureaus around the world. No editor in his or her right mind would pass up the chance to use this photo, one so obviously headed for the history books.

But maybe they should think a little harder about it.

In addition to the political storm over Le Duc’s photograph, there’s also a contentious cultural battle over who “owns” such images, how they’re used in the public square, and whether that use honors or dishonors the lives and memory of the people in them.

Plenty of people, in America and around the world, on Facebook and on Twitter, shared the photo from the border, most saying some version of “this has to be seen” and “don’t look away.” Others quailed, describing the photo but not linking to it. Others made a case that such images trade ghoulishly on our fascination with death, that we’re drawn to them because of the taboo they cross and not simply for the sufferings they capture.

And still others noted that many of the death images that transfix whole populations and become pivots of history tend to involve nonwhite victims — that Western news media outlets don’t balk at showing us dead foreigners but shy from similar photographs of Americans. We know what the civilian victims of violence in the Iraq and Afghanistan wars look like. We don’t want to see the US dead. They look too much like we’re supposed to.

Le Duc’s photograph occupies a gray area. It illustrates a sociopolitical tragedy — an avoidable one, one that has been caused — with a simplicity that breaks through the background chatter. The details both compel and obscure. Little Valeria’s body is tucked inside her father’s T-shirt, and her arm is wrapped protectively, beseechingly around his neck. They are face down in the water, a fused unity of failed yearning. We don’t see their faces, as we don’t see the full face of Alan Kurdi on that Mediterranean beach. If we did, it would be too unbearable, too confrontational. It would force us to contemplate our own complicity and inaction.

This is important. This is how people become signifiers for larger ideas and events. Kim Phúc is now 56 years old, lifelong friends with Nick Ut, her rescuer/memorializer, but she will always be that screaming, terrified child in our heads. The Ramírezes aren’t as lucky. They’re just icons now. It’s how the dead get used.

How do you feel about that use? Is it fair to use the bodies of Óscar Ramírez and his 2-year-old daughter to make America and the world face up to the consequence of US border policy? To discomfit comfortable readers, prompt them finally to ask what they can do and then maybe even do it? Many would say yes. I would say yes. Is it fair to Ramírez’s widow, Tania Ávalos? Even she might say yes, after she’s done grieving in ways you and I may never have to contend with.

But just as important, I think, is to look them in the eye, not in death but as they were in life. There are photos going around the Internet of father, mother, and daughter alive and happy, disseminated by those who knew them and who want us to know, too — to know that they’re not only symbols for the history books but individual human beings who had talents and quirks, who messed up in all the usual small ways and dreamed in all the big ones. That’s how you rescue the memory of Óscar and Valeria Ramírez. That’s how you make them more than today’s media atrocity.

Only when you see them in their specificity do you realize they’re just like you.