James Holzhauer, a 34-year-old professional gambler from Las Vegas, is the “Jeopardy!” whiz kid everyone is talking about.

With a 97 percent response accuracy rate, a single-game win record of $131,127, and surpassing the $1 million threshold after just 14 games, Holzhauer has grabbed a lot of attention.

But how does he compare with the illustrious Ken Jennings? And how long will it take him to oust the former champ? 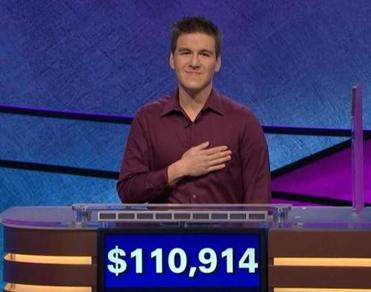 He plays a lot of bridge with competitors twice his age, and he gambles on sports in Las Vegas for a living. But when he’s not doing that, you might catch him at the library.

Jennings, meanwhile, noted that he is well aware of this fact — and even cracked a joke about it.

I don?t feel I get enough credit for making small, sensible Jeopardy wagers, which helped the show with its prize budget.

How is Holzhauer so gosh-darned good at answering trivia questions? The answer may not be what you think: children’s books.

“They are chock-full of infographics, pictures and all kinds of stuff to keep the reader engaged,” he previously told The Washington Post. “I couldn’t make it through a chapter of an actual Dickens novel without falling asleep.”

He also has a bachelor’s degree in math from the University of Illinois at Urbana-Champaign and has used those skills to help earn money gambling as well.

‘‘I think it was a huge advantage that I don’t blink at gambling large amounts of money when I think I have a big edge,’’ he previously said. ‘‘I approach both sports betting and ‘Jeopardy!’ with the same attitude: What can I do differently than the average person to give myself an edge?’’

As for his strategy to earn the most on the game show, Holzhauer tries to begin with the highest-value clues, hoping to quickly build winnings and land on the one ‘‘Daily Double’’ in the first round. When he does, he usually bets everything. (He doesn’t always bet everything in the two ‘‘Daily Doubles’’ in the second round, but he puts a lot on the line.)

Holzhauer also said he rarely guesses — because, in true sports gambling fashion, he doesn’t like those odds.

Wire material from The Washington Post and the Associated Press was used in this report.
Loading comments...
Most Popular in news
Real journalists. Real journalism. Subscribe to The Boston Globe today.