And Sunday night, Senator Kamala Harris, Democrat of California, is set to mingle with Hollywood luminaries at the home of the president of MGM Motion Picture Group, Jonathan Glickman.

The race for cash in the 2020 Democratic presidential primary is reaching a frenetic peak this weekend with a dozen fund-raisers on both coasts, as presidential hopefuls rush to vacuum up $2,800 checks — the maximum amount individuals can give for the primary by law — before the first quarterly fund-raising deadline of the campaign at midnight Sunday.

But the candidates don’t want to discuss any of this.

They are instead trying to pull off a delicate balancing act. Publicly, the 2020 hopefuls are all about attracting low-dollar donors, trying to prove their grass-roots appeal and populist bona fides by touting large numbers of small donations — an ascendant force in Democratic politics. But privately, most Democrats also badly need the big checks and are still going behind closed doors to woo the wealthy, whose money is critical to pay for campaign staff, travel, and advertising. 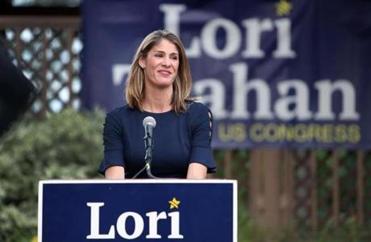 Trahan said she used personal funds to make big loans to her 2018 campaign, but the Campaign Legal Center says the numbers don’t add up.

As a result, a traditional part of presidential races early on — candidates trumpeting big-money and well-connected contributors as a show of political strength — has gone virtually underground. The jockeying for major donors remains as intense as ever, but the usual campaign announcements of powerhouse finance committees and boldfaced bundler lists have all but disappeared. Even some online RSVP pages for fund-raisers don’t identify the wealthy backers anymore.

Amy Dacey, former CEO of the Democratic National Committee, said the donor dynamics this cycle are “fundamentally different” from before.

“Candidates talk more about how many different donors they have and how many states they’re in,” she said. “It’s more about the donor amounts than the dollar amounts.” But, Dacey added of big donors, “They still need them.”

Two prominent candidates, Senators Bernie Sanders, Independent of Vermont, who caucuses with the Democrats, and Elizabeth Warren, Democrat of Massachusetts, have disavowed the traditional money circuit entirely — a safe bet for Sanders, whose online donor network amply funded his 2016 run, but a far riskier gambit for Warren, who has a far smaller base of low-dollar contributors.

Former representative Beto O’Rourke, Democrat of Texas, began calling some donors to seek support before he entered the race this month, but he is expected to lean heavily on a small-donor network that netted more than 100,000 contributions and $6.1 million in his first 24 hours. He has held no fund-raisers so far and has none planned yet, according to his campaign.

Unlike in 2016, when the Democratic donor class rallied to Hillary Clinton, or 2008, when givers lined up with Clinton, Barack Obama, and John Edwards, many of the party’s wealthiest figures remain firmly on the sidelines, serving as perhaps the biggest check on the role of big money in 2020 to date. That has given an advantage to O’Rourke and Sanders, who are banking on small donations. Those two, plus Harris, who has a strong small-donor network and has been aggressively courting larger contributors, are widely expected to raise the most in the first quarter.

At fund-raising events, attendees say, most 2020 candidates typically are delivering more intimate versions of their regular campaign speeches, pitching their vision for the country along with a heavy dosage on their political viability and pathway to the presidency, amid caterers circulating with drinks and snacks.

This past Tuesday, Harris was in the tony Washington neighborhood of Kalorama at an event where hosts were asked to raise at least $10,000 (although the price points were not listed on the front of at least one version of the e-mailed invitation). The Saturday before that, Booker was feted at the home of New Jersey Governor Phil Murphy, a Democrat, as singer Jon Bon Jovi circulated in the crowd before a three-course dinner that pulled in $300,000, according to a person familiar with the event. And before that, Senator Amy Klobuchar, Democrat of Minnesotta, was in Chicago asking for money at the home of a former Goldman Sachs banker who later served as ambassador to Canada, Bruce A. Heyman.

According to several donors as well as invitations obtained by The New York Times, four senators — Booker, Gillibrand, Harris, and Klobuchar — have been particularly aggressive on the national donor circuit. Former governor John Hickenlooper of Colorado, Governor Jay Inslee of Washington, and Mayor Pete Buttigieg of South Bend, Indiana, have been making calls and organizing events, as well.

“It takes a lot of time away from what we should be doing,” said former representative John Delaney, Democrat of Maryland, a businessman running for president who is mostly avoiding the money chase by self-funding his campaign. “I guess you’d call it a necessary evil.”

Schedules are often constructed, at least in part, around raising money. So while a recent trip by Harris to Texas drew headlines for her decision to rally in the home state of O’Rourke, the visit was also about raising money, with a fund-raiser at the Dallas home of Jill Louis, a partner in the law firm K&L Gates.

Some big donors who remain unaligned are waiting for former Vice President Joe Biden. Some are holding out for the field to thin. Others are writing checks to a number of contenders without committing exclusively for any one of them.

Some big names have taken sides, according to people familiar with their activities. Laurie Tisch, a wealthy philanthropist, is supporting Booker and recently held an event for him in New York. Naomi Aberly, former chairwoman of the Planned Parenthood Federation of America board, is raising money for Gillibrand and organized a Texas fund-raiser for her already.

Warren has essentially abandoned the pursuit of such donors, even though some have raised big sums for her in the past.

“This is our chance to run a grass-roots movement, not just to go around the country scooping up as much money as we can,” Warren said.