With the Texas Democrat en route from Penn State, and running over an hour late, organizers directed the waiting crowd to check O’Rourke’s Facebook page, where the candidate would, true to form, livestream the final leg of his journey as he rolled into the college town on the western edge of New Hampshire.

“Our ETA is four minutes from now. Thank you all for your patience,” said O’Rourke, filmed in profile by a staffer as the candidate clutched the steering wheel, before adding: “I’m sorry, I think that was our turn back there.”

There’s no question O’Rourke’s entrance into the Democratic presidential primary last week sparked interest and excitement from a swath of Democratic voters: look no further than the $6.1 million haul his campaign announced he had raised online in his first 24 hours in the race. Throngs of fans greeted him at stops along his rollout road trip, including in Iowa last weekend.

Yet that gush of giddy attention has been matched by skepticism from other Democrats who question whether a three-term congressman from Texas who lost his 2018 race for Senate really warrants this star treatment and, more importantly, if he has what it takes to beat President Trump. 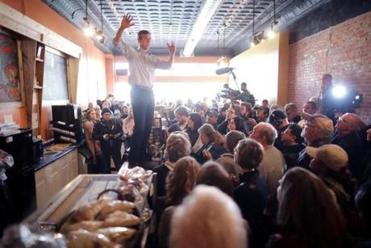 What’s the deal with Beto O’Rourke and standing on tables?

The Democratic candidate likes to stand on tables. Here are 12 pictures that prove it.

“I don’t get what the buzz is about,” said New Hampshire state Representative Kris Schultz of Concord, who was one of the founders of the nationwide “Draft Obama” campaign in 2008. “I think we have much better candidates with far better experience, with much better visions than he has.”

O’Rourke’s first visit to New Hampshire will be his first chance to convince the state’s famously discerning voters that he deserves the hype. O’Rourke plans to tour all 10 New Hampshire counties in about 48 hours, with stops in Claremont, Plymouth, and Manchester, among others.

On campus Tuesday night, a bank of television cameras waited, while reporters sought to capture the arrival of the now famous Dodge Caravan and students camped on the floor eating popcorn.

“He’s authentic and himself and that’s something that’s lacking with most political figures,” said Zoë Cygan, 19, a sophomore at Keene in the crowd.

Once he arrived, O’Rourke took off his jacket and ball cap, jumped onto a bench, and launched into a stump speech that was more stream of consciousness than crafted talking points. He covered immigration, foreign relations, mental health care, voting rights, student loan debt — his whole body bouncing slightly with every staccato punch of his right hand in the air.

He offered a broad message, promising bridge-building and extolling the power of the American can-do spirit. Discussing the need to respond to the imminent threat of climate change, he said he wanted his preteen son to be able to look back “on us, all of us right here at this moment, this country at its defining pivotal moment of truth and be proud of what we chose to do together . . . [that] it was rural and urban, Republican and Democrat, coming together to face this singular existential challenge of climate change before it was too late.”

The path O’Rourke’s has taken to the primary race — the solo journey after his midterm loss, leaving his wife and kids behind; the Vanity Fair cover story featuring photos by Annie Leibovitz and quotes from him about how he was “born to be in” the race for the White House, as he goes through his publicly tortured decision-making process — has elicited something of a collective eye roll from some Democrats, many of them women.

These critics, even those who say they find O’Rourke a potentially attractive candidate, can’t help but note that no woman could approach running for president like Jack Kerouac on a journey to find himself. They point out that none of the many accomplished women already running in the crowded Democratic field have drawn such fawning, wall-to-wall coverage as the young, attractive white man with a thinner resume.

He’s been mocked on “The View,” been forced to publicly acknowledge his own “privilege,” and has offered contrition for statements he’s made, including an offhand comment about how his wife, Amy, has raised their three kids “sometimes with my help.”

“He’s being called out for why it’s so easy for him,” said Erin O’Brien, a political scientist at the University of Massachusetts Boston. “I don’t think this conversation would have happened four years ago or eight years ago.”

In part, that’s because the Democratic field is deep, with multiple women and candidates of color against whom voters can compare O’Rourke — a different situation than he faced going up against Ted Cruz, arguably the most hated member of the Senate, O’Brien observed.

But O’Rourke insisted Tuesday that he is working hard and would compete in New Hampshire.

“You show up for everyone,” O’Rourke told reporters afterward, about his plan for the state.

“We will never distinguish between red or blue, rural or urban, all of us at the end of the day are Americans first,” he said. “We’re also going to make sure that we keep this conversation elevated about our ambitious, our aspirations, not who we don’t like, not who we are against, but what we are for.”

O’Rourke has time to recover from his early stumbles out of the gate — all the more so because of that money cushion he has from that first-day fund-raising blitz, strategists say.

“In 2007, the early ability of @BarackObama to raise eye-popping funds, a bunch of it online, bought him the time to work our the kinks and become the candidate we all remember. @BetoORourke has the same opportunity because of his enthusiastic base,” David Axelrod, a former adviser to Barack Obama, said on Twitter.

In 2007, the early ability of @BarackObama to raise eye-popping funds, a bunch of it online, bought him the time to work our the kinks and become the candidate we all remember. @BetoORourke has the same opportunity because of his enthusiastic base.https://t.co/0boNQM2ksb

Ruth Kessler, who drove up from Burlington, Mass., to see O’Rourke, also compared the Texan to the former president.

“He’s not an ideologue. He’s progressive but he’s also realistic. I mean, let’s face it, we’re not going to wake up tomorrow and have Medicare for all. It just isn’t going to happen,” said the 62-year-old, who was wearing a black-and-white Beto T-shirt from the Democrat’s Senate race. “I’d rather have somebody who has their feet on the ground.”