Taylor Usry’s routine work trip in July began like any other.

She chose a comfy dress and sandals to ease her travel anxiety, and arrived early at the airport, where she passed through security — her body scanned, searched, and patted, her belongings swabbed and sent through an X-ray machine.

Usry, a 39-year-old social media manager for an arts-and-crafts company, recalls buying a chicken biscuit and a Diet Dr Pepper while she waited in the terminal for her flight to Florida for a meeting at the Home Shopping Network.

She had no idea she was being watched during her humble meal — watched the entire time, in fact.

A team of armed federal air marshals was shadowing her every move — recording whether she touched her face or sweated, where she went, how she looked, and other seemingly minor details as she made her way through the Charlotte airport. The air marshals even flew with Usry, closely watching her until she left the Tampa airport, according to records reviewed by the Globe. 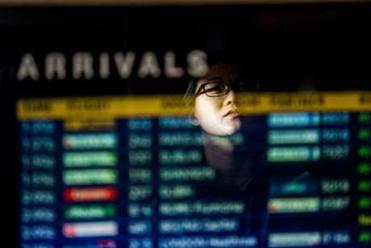 After the Boston Globe revealed the program, officials agreed Monday to brief Congress this week.

The documents show that Usry was swept up in the Transportation Security Administration’s Quiet Skies program that morning, one of roughly 5,000 US citizens subjected this year to extensive monitoring under a controversial domestic surveillance initiative designed to catch potential or unknown terrorists.

But such claims seem contradicted by Taylor Usry’s experience of being watched and followed, along with numerous other apparently ordinary citizens identified by the Globe as having been subjected to Quiet Skies scrutiny for reasons that mystify them.

“I’m not a terrorist,” Usry said upon learning that she was followed by air marshals. “I don’t do anything subversive. . . . I work from home.”

Usry, a mother of two from Williamsburg, Va., was targeted because she had recently flown to Turkey for an arts-and-crafts course, a country that is a focal point of the program, according to documents and air marshals with direct knowledge of Quiet Skies.

In addition to Usry, other targets identified by the Globe include star WNBA player Courtney Vandersloot; a working flight attendant; a business executive; and a law enforcement officer for another federal agency, according to documents obtained by the Globe and air marshals with direct knowledge of the surveillance.

The findings underscore concerns that Quiet Skies is infringing on people’s privacy for reasons that are unclear and may yield little gain — to date, air marshals have put roughly 5,000 people under Quiet Skies surveillance but none deemed worthy of additional scrutiny.

Several air marshals have told the Globe that Quiet Skies surveillance routinely includes passengers who pose no threat whatsoever. They said the program is misguided, pushes the boundary of law, and is a waste of time and resources.

Last month, the Globe revealed the existence of Quiet Skies, which specifically targets US citizens who are not on any terrorist watch list and not suspected of any crime.

Related: What you need to know about the Quiet Skies program

According to an internal TSA bulletin, the program may target people who have spent a certain amount of time in one or more specific countries or whose reservation information includes e-mail addresses or phone numbers associated with someone on a terrorism watch list.

The bulletin does not list the specific countries, but air marshals have been advised in several instances to follow passengers because of past travel to Turkey, according to people with direct knowledge of the program.

The TSA initially refused last month to even acknowledge the program’s existence, but released some details following the Globe report.

The TSA did not respond to several requests for comment for this article. The agency has, in past comments, staunchly defended the program.

The Quiet Skies program began in 2012, but officials broadened its scope in March. Since then, teams of armed air marshals have followed passengers not on any terror watch list and collected extensive information on their actions, such as whether the person chatted with others, or appeared sweaty or fidgety, agency documents show.

Several civil liberties groups and members of Congress have raised concerns about the legality of the program, as well as other issues regarding privacy and profiling. The Department of Homeland Security’s inspector general also opened an investigation.

The TSA, in defending Quiet Skies, has said the program should be of no concern to ordinary travelers. But Usry, who makes greeting cards for fun and has online profiles brimming with motivational sayings, recipes, and photos of craft beer, said she is as ordinary as they come.

“Honestly, I’m not unique, I don’t do anything special,” she told the Globe. “I have two kids, a cat, and a dog. I drive a Suburban.”

Knowing now that she was tracked by TSA leaves her deeply unsettled.

“The whole thing makes me uncomfortable and really, really nervous,” she said. “I’m from the South, where you smile at people, hold the door and say ‘please’ and ‘thank you.’ And now I’m paranoid.”

Records obtained by the Globe outline the criteria that flagged Usry: She carried US travel documents, was between the ages of 16 and 50, has a non-Turkish name, and booked a one-way ticket to one of 13 Turkish airports, with a stay of seven days or more.

Usry said she traveled to Istanbul in May for a product-testing event for her company.

“I sat in a training development center for a week and painted things,” she said. “I did arts and crafts.”

She said her husband booked one-way tickets on Expedia because it was easier and less expensive. Following her international trip, Taylor applied for TSA’s pre-check program, which she thought would help ease her anxiety and waiting time at airports. By June, she had passed a background check and been approved for the program, she said.

The TSA didn’t apparently deem her a threat. Yet, the same TSA division that vetted and approved Usry for pre-check also carries out the Quiet Skies program, documents show.

What happened between June and her July flight?

Nonetheless, she got snared in Quiet Skies on July 9.

Within 72 hours of her trip to Tampa, air marshals received a “special mission coverage” package including Usry’s name and photo, her birthdate, her eye and hair color, as well as an identification number. Air marshals were then given seats near Usry on her flight.

That morning, the surveillance mission was on.

Air marshals were required to follow Usry and take notes: Did she reverse or change directions during her stroll? Did she use the reflection of storefront windows to peer behind her? Did she go to the bathroom?

Today, Usry can’t recall all the details, but the air marshals likely can. Their detailed reports are filed and collected by the TSA.

Usry does recall another aspect of her flight, something so out of the ordinary she mentioned it to her husband that day. It stands out to her now as a red flag.

“There was a guy in line that was super, super friendly,” she said. The clean-cut man boarded second to last, right before her, and was extremely chatty throughout the boarding process and during the flight.

“He asked where I was staying,” she said. “He was so nice and friendly. He gave me restaurant recommendations. In hindsight, it is weird and creepy.”

Her husband joked that the man was surely flirting with her. Usry believes the overly inquisitive passenger was an air marshal.

She said her odd travel ordeal extended to her return flight days later, an experience so exhausting and invasive that she cried at the gate. This time the screening and pat-down was even more rigorous.

TSA screeners were extremely hands-on and inquired about the underwire in her bra, she said, and asked if she was wearing a thong or panty liner.

Later she went through an additional random bag check, this time at the boarding gate.

“I was super, double-triple checked at every opportunity and I thought it was really strange,” she recalled.

Usry, who hadn’t slept well the night before, said she likely looked a little frazzled. Still, she remains flummoxed as to why federal law enforcement officers would be following her every move and putting those details in a database.

“I’d like my government to explain to me why my tax dollars are best spent surveilling completely innocent citizens, violating their privacy, and making ordinary people feel as though they’ve behaved in a manner that invites skepticism and scrutiny,” she said. “Are the inherent, guaranteed rights of American citizens something to be thrown out because we feel like it? And why does no one have to answer for that?”

Geoffrey Stone, a University of Chicago law professor, said Usry’s experience raises questions about whether the TSA program is legal.

“The reasonable justification can’t be she went to Turkey on a one-way ticket. That’s crazy,” Stone said. “That can’t possibly be adequate justification for picking her out for a search.”

If the basis for Usry’s surveillance is confined to what is noted on her Quiet Skies documents, the actions by the agency are not only potentially illegal, but a waste of taxpayer money, Stone said.

“I mean, to have two air marshals sitting on a plane, there has got to be at least some reason, it’s just too expensive,” said Stone, who was chosen by President Barack Obama in 2013 to help review foreign intelligence surveillance programs.

It’s not just occasional travelers who find themselves snared by Quiet Skies.

Courtney Vandersloot, a star point guard in the Women’s National Basketball Association, was recently followed by a team of armed air marshals during a domestic trip, according to documents reviewed by the Globe.

Vandersloot, who was born outside Seattle, also played hoops in Turkey for the last three seasons and was approved in 2016 for Global Entry, a federal program that allows expedited clearance for pre-approved, low-risk travelers.

Yet on domestic flights with teammates earlier this year, Vandersloot was pulled out of security and boarding lines with regularity. She recalled “pretty extreme” searches in which TSA agents asked, among other things, about her underwear.

“There has to be some other way,” said Vandersloot, 29.

She noted the US government knows well why she has spent time in Turkey — she has a work visa and a residence permit to play basketball there.

“I would like to believe the government has more important things to do with their time and money than follow WNBA players around the country or any other person for that matter,” Alter said.

Despite the recent wave of criticism, the TSA has vowed to continue Quiet Skies. Meanwhile, civil liberties groups and some politicians are demanding more information.

In early August, the Council on American-Islamic Relations, a Muslim civil rights and advocacy group headquartered in Washington, D.C., filed a motion seeking details about Quiet Skies in an ongoing lawsuit against the TSA. The motion noted that TSA officials had been deposed earlier this year about agency operations, and failed to disclose the existence of the program.

In a March 20 deposition, TSA official Hao-Y Froemling said the agency does “not perform intelligence collection on passengers at airports.”

But the Quiet Skies surveillance program appears to do just that, CAIR’s attorneys argue.

Jana Winter can be reached at jana.winter@globe.com. Follow her on Twitter @JanaWinter. This investigation was made possible through the Spotlight Investigative Journalism Fellowship, a social impact initiative of Participant Media. For more, go to www.spotlightfellowship.com.
Loading comments...
Most Popular in news
Real journalists. Real journalism. Subscribe to The Boston Globe today.