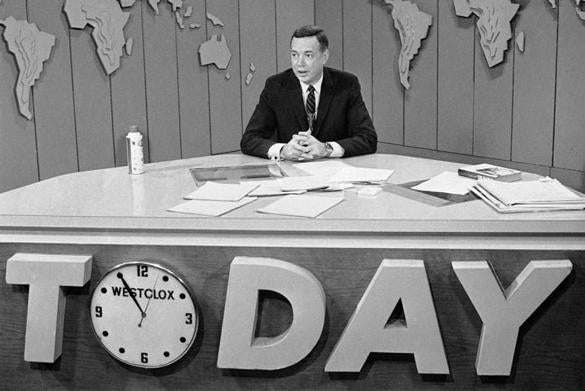 Hugh Downs, whose honeyed delivery and low-key but erudite manner helped make him a familiar face and voice on television for half a century, and whose career included long stints as host of both “Today” on NBC and “20/20” on ABC, died Wednesday at his home in Scottsdale, Ariz. He was 99.

Smith served as ambassador to Ireland for five years under President Bill Clinton. She also founded an arts education program that supports artists with physical or mental disabilities.

’She was an angel’ — Corrine White, mother, foster mother, and baby sitter to a Roxbury neighborhood, dies at 96

At her home in Roxbury, Corrine White raised her own children, foster children, and uncounted others she looked after while their mothers were at work.

Aubri Esters, an advocate for safe drug use on the streets, dies at 35

Serving on the state's Harm Reduction Commission, Aubri Esters provided an eloquent public voice for those who use drugs and those without homes.

Jonathan Sackler, one of the owners of OxyContin maker Purdue Pharma, has died, the company confirmed.

Li Zhensheng, a photographer who at great personal risk documented the dark side of Mao Zedong’s Cultural Revolution, producing powerful black-and-white images that remain a rare visual testament to the brutality of that tumultuous period, many of them not developed or seen for years, has died. He was 79.

Elected mayor in 1972, Barbara Ackermann was a fierce advocate for rent control and for Cambridge residents who were marginalized because of their race, income, or age.

Mr. Cordero was a towering Canadian actor who earned a Tony nomination for the 2014 musical ‘‘Bullets Over Broadway.’’

NASHVILLE, Tenn. — Charlie Daniels, the singer, songwriter and bandleader known for his brash down-home persona and his blazing fiddle work on hits like “The Devil Went Down to Georgia,” died on Monday in Nashville.

PARIS — Marc Fumaroli, a leading French historian, public intellectual and defender of the French language and culture against American influence and what he called “globish English,” died on June 24 in Paris. He was 88.

Nikolai Fadeyechev, one of the Bolshoi Ballet’s greatest dancers, who was hailed for his distinctive noble style and his chivalry as a partner to the Russian company’s leading ballerinas from the 1950s to the ’70s, died June 23 in Moscow. He was 87.

In the 1940s and ’50s, when Madeline McWhinney was a young economist at the Federal Reserve Bank of New York, banking was such a men’s club that meetings were often held inside one. At such gatherings at the Union League Club on Park Avenue, which didn’t allow women to join until the late 1980s, McWhinney had to enter through a side door and be chaperoned by an older Fed official.

Over his long, colorful life, the peripatetic James Sherwood seeded many businesses — container leasing, a London guidebook, ferries and riverboats, hotels and restaurants (like the 21 Club in New York and Harry’s Bar in London), an ice cream company, a magazine, fruit farms, and a vineyard.

Earl Cameron, who was one of the first Black actors to perform in mainstream British films and played supporting roles to enduring entertainment icons such as James Bond and the title character in “Doctor Who” before appearing in the thriller “The Interpreter” in his 80s, has died. He was 102.

Tunney Lee arrived in Boston from China at age 7 and became a keeper of Chinatown's history and memories. As an architect, he emphasized collaboration and an understanding of how people use buildings.

Linda Cristal, who starred in ‘The High Chaparral,’ at 89

Ms. Cristal, an Argentine-born actress who played Victoria, the regal, fiery wife of the rancher Big John Cannon on the 1960s television series, died on Saturday at her home in Beverly Hills.

Lonnie Wheeler, a sports writer and columnist who collaborated with Baseball Hall of Famers Hank Aaron, Bob Gibson and Mike Piazza on their autobiographies, died June 9 in Cincinnati. He was 68.

Margaret Morton, photographer at home with the homeless, dies at 71

From her apartment on East 10th Street in Manhattan, Margaret Morton had a front row view of the homeless encampments that engulfed Tompkins Square Park in the late 1980s. As she walked to work at Cooper Union, where she was a professor, she began to photograph these improvised structures, showing the ways people were moved to make themselves at home even when they had so little.

Saroj Khan, choreographer who made Bollywood sparkle, dies at 71

Saroj Khan, a Bollywood choreographer whose film career spanned more than 60 years, and who created some of the industry’s most famous dance scenes in the 1980s and ’90s, died Friday at Guru Nanak hospital in Mumbai. She was 71.

Mr. Carlino earned an Oscar nomination for “I Never Promised You a Rose Garden” and both adapted and directed “The Great Santini.”

Gregory Katz, reporter at home in war or fashion

Gregory Katz, an omnivorous foreign correspondent who was as much at home in war-torn Kosovo or Iraq as he was at Ascot or a fashion show, died June 23 at a hospital in London. He was 67.

Maria de Sousa, one of Portugal’s leading scientists, first made her mark with research in immunology while working in Britain and the United States.

Ms. Culverhouse, a former president of the Tampa Bay Buccaneers who went on to champion the cause of ex-NFL players debilitated by dementia and other health issues, died Wednesday at age 73.

Ms. Buchanan entertained world leaders as the wife of an ambassador and White House chief of protocol.

Anders Ericsson, cognitive psychologist and expert on expertise, at 72

Anders Ericsson, cognitive psychologist and expert on expertise, dies at 72.

Steve Bing, a real estate heir who became a Hollywood producer and film financier, died Monday in Los Angeles after jumping from the balcony of his 27th-floor apartment. He was 55.

Robert Levey, whose Globe reporting ranged from racial inequities to restaurants, dies at 81

Robert Levey began his Globe career writing about Boston school inequities and ended as the the restaurant critic.

The Rev. Georg Ratzinger, a Roman Catholic priest and celebrated choirmaster who was the older brother of Benedict XVI, the pope emeritus, died Wednesday in Regensburg, Germany, where he had lived for most of his life.

Angela Madsen was a healthy young Marine who was playing basketball when she suffered a serious back injury in 1981. When she had back surgery a dozen years later, at 33, she woke up paralyzed from the waist down.

Mr. Anaya helped launch the 1970s Chicano Literature Movement with his novel “Bless Me, Ultima,” a book celebrated by Latinos.

Carl Reiner, multifaceted master of comedy, is dead at 98

Carl Reiner, who as performer, writer and director earned a place in comedy history several times over, died Monday night at his home in Beverly Hills, California. He was 98.

When Sister Angela was 98 years old, she moved out of the Roman Catholic Convent of Mary the Queen in Yonkers, N.Y., and into an assisted living facility run by Jewish Home Lifecare in the Bronx. Isn’t that the way faith goes in New York?

NEW YORK — Milton Glaser, a graphic designer who changed the vocabulary of American visual culture in the 1960s and ’70s with his brightly colored, extroverted posters, magazines, book covers and record sleeves, notably his 1967 poster of Bob Dylan with psychedelic hair and his “I (HEART) NY” logo, died Friday, his 91st birthday, in Manhattan.

John J. Mooney, an inventor of the catalytic converter, the small and ubiquitous device that makes the engines that power everything from cars to lawn mowers less polluting and more fuel efficient, died June 16 at his home in Wyckoff, N.J.

Dr. William Dement, whose introduction to the mysteries of slumber as a postgraduate student in the 1950s led him to become an eminent researcher of sleep disorders and to preach the benefits of a good night’s sleep, died on June 17 in Stanford, Calif.

Elly Stone, who was enjoying a moderately successful career as a singer and actress when she jumped to a new level of fame in 1968 as part of the wildly popular musical revue “Jacques Brel Is Alive and Well and Living in Paris,” died June 11 in Cuenca, Ecuador. She was 93.

Thomas Edwin Blanton Jr., the last of three one-time Ku Klux Klansmen convicted in a 1963 Alabama church bombing that killed four Black girls and was the deadliest single attack of the civil rights movement, died Friday in prison, officials said. He was 81.

Elsa Joubert, one of South Africa’s best-known writers in the Afrikaans language, whose apartheid-era novel “The Long Journey of Poppie Nongena” opened the eyes of many white South Africans to the harsh treatment that the black majority had been enduring largely out of their sight, died June 14 in Cape Town. She was 97.

Robert M. Laughlin, an anthropologist and linguist whose extensive work in the state of Chiapas in southern Mexico documented and helped revitalize Mayan languages and culture, died on May 28 in Alexandria, Virginia.

When Mr. Smith began his research career in the 1970s, he was studying the health risks posed by nuclear power.

Charles Webb, who distanced himself from his novel ‘The Graduate,’ dies at 81

Mr. Webb, who became famous but not wealthy from ‘‘The Graduate,’’ went on to write a slew of additional novels while championing an antimaterialist philosophy and living in poverty.

Eula Bingham, a toxicologist who energized the Occupational Safety and Health Administration as its director and set stringent standards to protect workers from hazardous materials, died June 13 in Cincinnati. She was 90.

Michael Hawley, whose talents soared as an MIT professor and a pianist, dies at 58

"I’m in the illumination business," Michael Hawley once said of his multifaceted career as an MIT professor, world-class pianist, and cutting edge researcher in computers.

Harry Anderson, with ancestral ties to American wealth and power going back to Aaron Burr, learned to sail as a boy at Seawanhaka, a venerable yacht club on Long Island’s North Shore, its gabled clubhouse rising from a green bluff on Centre Island overlooking Oyster Bay.

Jean Raspail, an award-winning author best known for “The Camp of the Saints,” a novel that envisions a takeover of the Western world by immigrants from developing countries and that was embraced as a cautionary tale by white-supremacists, far-right political figures and a member of the Trump administration, died June 14 in Paris.