John Havlicek, the understated superstar who transformed an off-the-bench role into a Hall of Fame career and became the all-time leading scorer with the Boston Celtics, died on Thursday in Jupiter, Fla. He was 79.

Every one of Mr. Havlicek’s 16 seasons was spent in a Celtics uniform, 13 of them as an all-star. Throughout, he set league records for games played (1,270) and consecutive 1,000-point seasons (all 16), as he played across Celtic dynasties. He was known for his huge lungs and an epic work ethic, constantly hustling the floor quarter after quarter and honing his skills long beyond when other basketball players hit the point of retirement.

“Havlicek stole the ball” is still one of the great rallying cries in sports history, shouted by announcer Johnny Most and quietly repeated by countless numbers of aspiring players in pickup games across the region for years after.

Mr. Havlicek suffered from Parkinson’s disease. His death was confirmed by the Celtics.

Get Fast Forward in your inbox:
A look at the news and events shaping the day ahead, delivered every weekday.
Thank you for signing up! Sign up for more newsletters here

“John Havlicek is one of the most accomplished players in Boston Celtics history, and the face of many of the franchise’s signature moments,’’ the Celtics said in a statement. “John was kind and considerate, humble and gracious. He was a champion in every sense, and as we join his family, friends, and fans in mourning his loss, we are thankful for all the joy and inspiration he brought to us.’’ 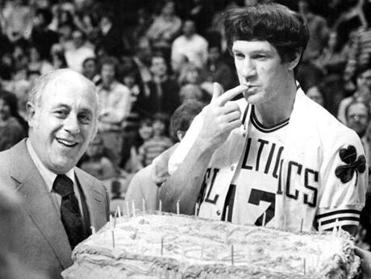 Hall of Famers, former teammates, and others shared their thoughts Thursday after the Celtics legend died.

Fellow Hall of Famer Bill Russell, who played alongside Mr. Havlicek for seven years before handing over the captaincy to him, simply said, “He is the best all-around player I ever saw.”

“If I hadn’t separated my shoulder [in 1973], we definitely would have won that year,” he reckoned. “And if we had hung on to [Paul] Silas and Westy [Paul Westphal], we might have squeezed out another one.”

While Mr. Havlicek averaged more than 20 points per game as a swingman, despite dunking approximately once a decade, he was best known for a defensive play that saved the 1965 season and sent the Celtics to their eighth title.

With Boston clinging to a 1-point lead over Philadelphia with five seconds to play in the seventh game of the Eastern Conference finals at the old Boston Garden, the 76ers were inbounding the ball with a chance to win the game.

Most’s radio call remains the most famous in franchise history: “[Hal] Greer putting the ball in play. He gets it out deep and Havlicek steals it! Over to Sam Jones! Havlicek stole the ball! It’s all over!”

Although Mr. Havlicek, who was guarding Chet Walker, had his back to Greer, he had an innate sense of when the ball might be in the air.

Mr. Havlicek’s meticulous approach to basketball was mirrored in the precision of his daily life.

“His clothes are all hanging half an inch apart in the closet at home,” said his wife, Beth, whose husband folded his socks over a dressing-room hanger and combed his hair at halftime. “Everything from the medicine cabinet to the dresser drawers to the garage is kept that way. John was probably born like that.”

John Joseph Havlicek, whose father emigrated from Czechoslovakia, was born in a coal-and-steel town in eastern Ohio and lived in a house above his parents’ grocery store. His grandfather and uncles worked in the mines. Although he was frequently unwell as a child (“Crying and sickness were my trademarks’’), Mr. Havlicek grew into an exceptional multisport athlete.

At Ohio State, where football coach Woody Hayes unsuccessfully recruited him for quarterback, Mr. Havlicek played first base for the baseball team and was a sophomore starter on the Buckeye basketball varsity that won its only national championship in 1960.

Two years later, the Celtics picked him seventh overall in the NBA draft and hoped that he wouldn’t opt for pro football, as the NFL’s Cleveland Browns had chosen Mr. Havlicek in the seventh round of that draft even though he hadn’t played since high school.

After Mr. Havlicek was the last receiver cut in Browns training camp, he turned up in Boston and ate his first meal at the Hayes-Bickford cafeteria across from the Garden.

“Look what the hell we got here,” marveled coach Red Auerbach while watching Mr. Havlicek in perpetual motion during the team’s first practice.

Since the Celtics were coming off their fourth straight title season and were loaded with established stars such as Bob Cousy, Tom Heinsohn, Jones, and Russell, their crew-cut rookie immediately was cast as a substitute.

“I came into a great situation where I had all the veterans around me,” observed Mr. Havlicek, who was nicknamed “Hondo” for his resemblance to John Wayne in the 1953 film. “And through the process of osmosis, I guess, I became one of the people they could rely on.”

Mr. Havlicek’s versatility at guard and forward made him a natural sixth man, a role created for teammate Frank Ramsey, who retired after the following season.

“I think people emphasize too much who’s starting,” observed Mr. Havlicek, who relished the assignment. “Emphasis should be on minutes played.”

Mr. Havlicek, who averaged nearly 37 minutes per game during his career, had extraordinary stamina, helped by lungs so large they had to be X-rayed separately. He took particular pride in his durability and reliability; he missed only 33 of 1,303 regular-season games and fouled out only 21 times.

“There should be a giant key sticking out of his back,” Russell once cracked. “You just wind him up and click-click-click, you put him out there for 48 minutes.”

Mr. Havlicek had no problem being on the floor for the full regulation and beyond.

Defending Mr. Havlicek, who was continually on the move, was an exhausting assignment.

“A roadrunner taking you through every ditch, every irrigation canal, barbed-wire fence, and cattle guard,” observed Los Angeles Lakers general manager Pete Newell, whose University of California team lost its title to Ohio State in the 1960 final. “You’ve had a trip over the plains when you’re playing him for a night.”

Mr. Havlicek’s capacity to go the distance game after game was especially valued during the Celtics’ rebuilding period at the beginning of the ’70s following the retirement of Russell and Jones when he became what Auerbach called ‘‘the guts of the team.’’

“I became the old man in one year because of the retirements,” Mr. Havlicek observed.

By then he’d assumed he would be nearing the end of his career.

“To be truthful, I never thought I’d last more than eight or nine years,” Mr. Havlicek said. “When I broke in, that was about the limit.”

Yet at 30 he was the cornerstone of the team, leading the league in minutes.

“He’s the complete player . . . the whole thing,” said Heinsohn, who played alongside Mr. Havlicek for three seasons and coached him for nine. “He stands alone.”

After turning down a million-dollar offer to jump to the rival American Basketball Association in 1969, Mr. Havlicek made it clear he expected to be compensated as the team’s main man. “Now it’s my turn,” he said. “For years, the top contracts went to others on the team, and I could understand. I’ve met all the standards the Celtics use to reward players.”

What set Mr. Havlicek apart from his teammates and rivals was his obsessive attention to detail — the toiletries in his locker were arranged in descending order of height.

“I’m a man of routine and discipline,” he said. “My whole life has been thought out.”

But when it came to finding ways to play despite disabling injuries in the playoffs, Mr. Havlicek was craftily creative. After separating his right shoulder in the third game of the 1973 Eastern Conference finals against the New York Knicks, he strapped it in a sling and shot with his left hand for the remainder of the series.

After tearing the plantar fascia in his left foot at the beginning of the 1976 playoffs, Mr. Havlicek iced it down for six times as long as advised (“two Hondo handfuls”), missed only three games, and played 58 minutes of the epic triple-overtime victory over the Phoenix Suns at the Garden that set up Boston’s 13th title.

“I don’t think you should mind a little pain if you’re paid to play,” he said.

In 1977, when fluid on his left knee inhibited his shooting, Mr. Havlicek simply invented an impromptu repertoire.

Although his exceptional conditioning could have enabled him to play for several more years, Mr. Havlicek decided to retire at 38 at the end of the 1977-78 season, in which he played all 82 games. He wore a tuxedo to his finale against Buffalo at the Garden (“You should wear special clothes on special occasions”) and played 41 minutes, scoring 29 points.

“I’m going to remember most the people in the stands,” said Mr. Havlicek, whose number 17 was retired the following October. “And the flags hanging above me.”

Had he played for two more seasons, Mr. Havlicek would have been teammates with Larry Bird, with whom he once engaged in a one-on-one duel after Bird bragged that he would have dominated Havlicek had he played against him.

“I said, ‘Fine, let’s go right now,’ ” Mr. Havlicek said. “I made a swipe for the ball, but in doing so I hit him in a very tender spot. He went down and stayed down for a good two minutes. I said, ‘That’s it. You lose. You aren’t tough enough to have played in my day.’ ”

Mr. Havlicek could have spent his retirement fishing, which had been a lifetime avocation. For more than three decades, he sponsored a celebrity fishing tournament on Martha’s Vineyard to benefit the Genesis Foundation for Children.

Since he had deferred much of his salary and invested early in Wendy’s restaurants, his financial circumstances were secure.

Mr. Havlicek had no interest in coaching or in being a conventional businessman.

Instead, Mr. Havlicek became a corporate speaker for several firms, including Xerox, whose Japanese competitors he likened to the Lakers. During his playing days, the Celtics were 5-0 in NBA finals against Los Angeles.

“The guy is the ambassador of our sport,” longtime Laker rival Jerry West said. “John always gave his best every night and had time for everybody — teammates, fans, the press. He is simply the ideal everybody expects an athlete to be.”

John Powers can be reached at john.powers@globe.com.
Most Popular in metro
Real journalists. Real journalism. Subscribe to The Boston Globe today.