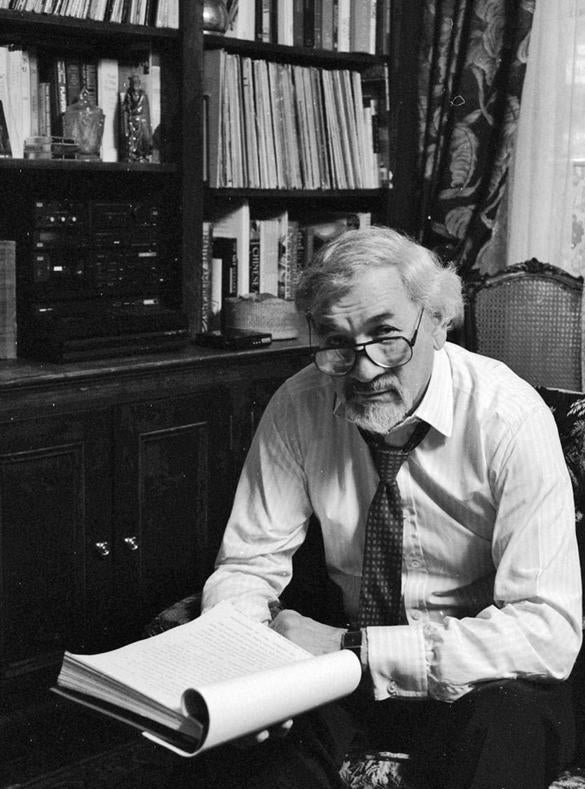 Mr. Garfein, a Holocaust survivor, became a noted director, producer and acting teacher, working with some of the greatest actors and playwrights of his era.

During his tenure, Rev. Morton transformed the cathedral into a vibrant center for the arts, the homeless, circus performers, endangered animals, and interfaith engagement.

Barry Tuckwell, Australian virtuoso of the French horn, dies at 88

Mr. Tuckwell compared playing the French horn to ‘‘driving a Daimler at top speed on a slick road’’ — even the slightest mistake could have disastrous consequences

Norma Tanega, who sang about a cat named Dog, dies at 80

In 1966, when Norma Tanega released her first single, rock fans were becoming used to unusual lyrics. But as it turned out, that song, “Walkin’ My Cat Named Dog,” wasn’t as quirky as the title suggested: The song was inspired by her cat, whose name was indeed Dog.

Christopher Tolkien, son of J.R.R. Tolkien and keeper of his legacy, dies at 95

Long after his father died in 1973, Mr. Tolkien worked to keep the stories that he created in “The Hobbit” and “The Lord of the Rings” alive for readers.

Father John L. Doyle, a voice for the poor and immigrants, dies at 93

The Rev. John Doyle, 93, who died Jan. 12, advocated on behalf of the poor and immigrants in Boston, Brockton, and Bolivia.

Mr. Earle’s government service spanned three decades, beginning with his appointment in 1968 as a Pentagon aide for international security affairs.

The engineer and inventor helped bring the power of the printing press to the masses.

Marion Chesney, who in midlife began writing novels and produced more than 150, including mystery series written under the pseudonym M.C. Beaton that featured the endearing crime solvers Agatha Raisin and Hamish Macbeth, died on Dec.

Ms. Mazzetti helped create an influential British film movement and wrote “The Sky Falls,’’ a prizewinning novel based on her experiences.

By deftly reconstructing faces, Ms. Gatliff helped law enforcement identify scores of people who went missing or had been murdered.

Mr. Bryant, a resident of Martha’s Vineyard, wrote for almost four decades on his love for fishing, hunting, and outdoor life for The New York Times.

Ivan Passer, a director who, along with Milos Forman and others, ushered in the filmmaking movement known as the Czech New Wave in the 1960s, then went on to direct American features including “Born to Win,” “Cutter’s Way” and “Creator,” died Thursday at his home in Reno, Nevada. He was 86.

Ronald Melzack, cartographer of pain, at 90

Soldiers with deep wounds sometimes feel no pain at all for hours, while people without any detectable injury live in chronic physical anguish. How to explain that?

The longest-serving leader in the Middle East, he transformed his Persian Gulf kingdom from an isolated enclave into a developed, influential nation.

Harold Burson, considered a giant in public relations, dies at 98

Mr. Burson was hailed by the industry publication PRWeek in 1999 as the most influential PR person of the 20th century.

Mr. Rothchild was a prolific journalist who used humor to turn books about personal finance into engaging reads.

Georges Duboeuf, French winemaker known as the ‘pope of Beaujolais,’ dies at 86

Georges Duboeuf, French winemaker known as the ‘pope of Beaujolais,’ dies at 86

Peart died of brain cancer, according to a statement from Elliot Mintz, a representative for the family.

Adela Holzer; her fall from grace was theatrical

Mrs. Holzer was one of Broadway’s top producers in 1975. Within four years, she was in jail.

Mr. Dye never thought golf was meant to be fair, inspiring him to build courses that were visually intimidating.

Buck Henry, ‘Graduate’ screenwriter who cocreated ‘Get Smart,’ dies at 89

Mr. Henry, a comedian who created the satirical spy sitcom ‘‘Get Smart’’ with Mel Brooks, was a frequent early host of ‘‘Saturday Night Live.”

Dorothy Tye, dietician and activist in Jewish organizations, dies at 101

Dorothy Tye, 101, who died Dec. 27, was a dietician and a longtime activist in Jewish organizations in the Merrimack Valley and throughout the region.

Bob Wade, sculptor of the outlandishly large, dies at 76

His 63-foot-high saxophone lured patrons to a blues nightclub in Houston.

For generations, female meteorologists were practically unheard of. So, too, were black atmospheric scientists. A trailblazer for both was June Bacon-Bercey.

The director was known for inventive and often provocative stagings of seminal Wagner operas.

Writing with extreme candor, Ms. Wurtzel was one of several authors who helped reinvigorate the personal memoir in the 1990s.

Michael Fitzpatrick, a former congressman from suburban Philadelphia who served four terms in the House before handing off the seat to his brother, died Monday after a long battle with melanoma. He was 56.

Hans Tilkowski, the West Germany goalkeeper in the 1966 World Cup final against England, has died. He was 84.

John Baldessari, who gave conceptual art a dose of humor, at 88

John Baldessari, the influential conceptual artist who helped transform Los Angeles into a global art capital through his witty image-making and decades of teaching there, died on Thursday at his home in the Venice neighborhood of Los Angeles. He was 88.

When researchers began tinkering with a class of tranquilizer drugs called benzodiazepines in the 1950s, they felt they had uncovered a solution to modern anxiety and insomnia. Benzodiazepines worked quickly and effectively to quell racing heartbeats and dismiss spinning thoughts.

Sydney Leonard, inspiring ballet mistress for generations of young dancers in ‘The Nutcracker,’ dies at 100

Sydney Leonard, who died Jan. 2, was a teacher, choreographer, and the longtime ballet mistress for young dancers in the Boston Ballet’s annual performances of “The Nutcracker.”

Sam Wyche, who pushed the boundaries as an offensive innovator with the Cincinnati Bengals and challenged the NFL’s protocols along the way, has died. He was 74.

Horvath, of South Yarmouth, who died Dec. 17, played for the Bruins as part of what was dubbed the “Uke Line” and set a team scoring record in the 1959-60 season.

May Stevens, who turned activism into art, dies

Ms. Stevens devoted her art to such causes as the civil rights, antiwar, and feminist movements.

Syd Mead, a designer whose wide-ranging work included envisioning vehicles of the future as well as helping to shape the look of environments in movies like “Blade Runner,” “Tron,” and “Aliens,” died on Monday.

Jack Sheldon, trumpeter and ‘Schoolhouse Rock!’ Singer, is dead at 88

Jack Sheldon, an accomplished jazz trumpeter who also had a successful parallel career as an actor — but whose most widely heard work may have been as a vocalist on the animated television series “Schoolhouse Rock!” — died on Dec. 27.

Gertrude Himmelfarb, a historian of ideas who applied cool intelligence and elegant writing to making the case that Victorian-era morals should invigorate contemporary social policies, died Monday night at her home in Washington. She was 97.

Ms. Figes’s most successful book was “Life After Birth, which explored the extreme shifts in identity that women undergo after childbirth.