The steps of Harvard’s Widener Library might not be the obvious setting for a showdown between the working class and The Man.

But so it was last week. The afternoon that I stopped by, perhaps 100 graduate students in the third day of a strike were protesting against what they consider the university’s unfair labor practices. Their union of 4,500 students has been bargaining fruitlessly for 13 months. They are demanding higher pay, better health care, and greater protections against harassment and discrimination.

Negotiations between the school and the union broke down over a week ago — though “broke down’’ may be a misleading way to describe talks that never seemed to be gaining traction to begin with.

What does it mean for graduate students to strike? Aside from being students, many of them perform work that professors want to be spared: grading exams and assignments, counseling students, working in labs. They are critical to the infrastructure of the place. And some of them perform those duties at minimum wage, which should be an embarrassment to Harvard, a worldwide symbol of privilege and power.

“We know that it is our labor that makes this place run, and we are going to withhold that labor until they agree to a fair contract that student workers deserve,” said Rachel Sandalow-Ash, a third-year student at Harvard Law School. “As a research assistant at the law school, I make $12 a hour; that’s the Massachusetts minimum wage. This is a university with a $41 billion endowment and a $5 billion annual operating budget. There’s no reason we should be making that little.” 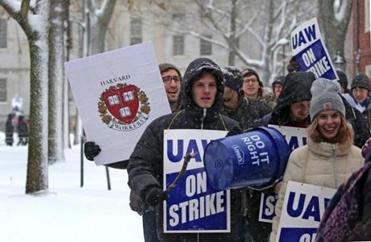 Harvard graduate students walk off the job after negotiations stall

The strike comes after more than a year of negotiations between the newly formed graduate student workers union and Harvard officials.

Harvard officials say they are ready and willing to bargain with the union, though there are no bargaining sessions scheduled. “The university continues to engage with the union for solutions on addressing the concerns that have been central to these negotiations: compensation, benefits, and how the university handles matters of discrimination and harassment,” said university spokesman Jonathan Swain.

Money is not the only sticking point, or necessarily the greatest conflict. Students are also demanding independent mediation for claims of discrimination or harassment. Students point to the widely reported case of Jorge Dominguez, a professor, as an example of the school’s refusal to address instances of harassment. Dominguez “retired” in 2018 after being accused of sexual misconduct by 18 women. To the striking students, his case is a compelling illustration of why an independent review process is urgently needed.

“How many more people was that faculty member empowered to abuse, because he knew that he wouldn’t be accountable and he knew student workers and faculty wouldn’t be protected?” asked Lee Kennedy-Shaffer, a doctoral student. “The university is taking the position that it should be able to police itself.”

In its first week, the strike drew support from colleagues in the labor movement. Some deliveries of supplies were halted when UPS workers refused to cross the picket line. Construction workers at Harvard Medical School stopped working on a facade. In something that could only happen in a college labor action, some interlibrary loans were halted.

Some Harvard students who aren’t in the union also took notice, like Remedy Ryan, an undergraduate who told me that three of her teaching assistants had stopped work. “It’s ridiculous that I’m at the wealthiest university in the country and they can’t afford to give my teaching fellows [better] health care,” Ryan said.

Of course, this is not the first job action at Harvard. Dining hall workers walked out for three weeks in 2016, before winning significant concessions on wages and benefits. The grad students on strike say they draw inspiration from that.

“My first year here was when the dining hall workers went on strike,” said Kennedy-Shaffer. “They held out a long time and got a great contract. We see that as the power workers have on this campus and we’re showing it again right now.”

Adrian Walker is a Globe columnist. E-mail him at adrian.walker@globe.com.
Loading comments...
Most Popular in metro
Real journalists. Real journalism. Subscribe to The Boston Globe today.