If you gave me a thousand adjectives to describe Elizabeth Warren, I would not land on “angry.”

And yet here we are, a year from the election, informed by Joe Biden that an unnamed opponent who sounds suspiciously like our senior senator from Massachusetts is possessed by a troubling anger.

This person reflects an “angry unyielding viewpoint that has crept into our politics,” Biden wrote on Medium, a website that isn’t named for public enthusiasm about the former vice president’s campaign but could be.

Biden didn’t name Warren, an approach that might reflect a cowardly viewpoint that has crept into our politics. But the message was quite clear.

“Is Elizabeth Warren ‘angry’ and antagonistic?” a Washington Post headline following the criticism wondered. “Or are rivals dabbling in gendered criticism?” 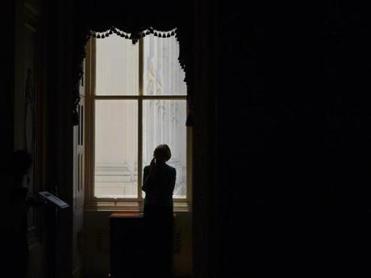 This Halloween, the scariest costume for trick-or-treating on the Upper East Side is a jewel-tone cardigan over a black scoop-neck.

I confess that first question hadn’t occurred to me until noted woman-respecter Joe Biden raised it. Warren famously spends hours after events taking hundreds of smiling selfies. She is so gregarious and polite that debate rival John Delaney just sort of smiled wanly as Warren dug a Delaney-sized hole in the stage and cheerfully buried him in it a few months ago.

Obligated to describe her, I’d burn through a whole thesaurus before I described her demeanor as “angry.” Persistent. Intense. Direct. Hours would turn into days inside the weird imaginary conference room where I was being forced to come up with adjectives for Elizabeth Warren for some reason. Energetic. Ambulatory. Uh . . . bespectacled?

This makes the answer to the second question fairly straightforward.

“Angry” is the kind of thing that occurs to people — men and women both, but let’s be serious here, mostly men — who say they would happily vote for a woman for president . . . just not whichever woman happens to be on the ballot at the moment. They treat voting for a woman the way I treat skydiving. Of course I’d jump out of a plane! Just not this particular plane at this time. On account of its engines are quite “shrill.”

Four years ago, the “I’d vote for a woman, just not this woman” folks sometimes pointed to Warren as an example of who they would have voted for. Now they’re writing Amy Klobuchar and Kamala Harris fanfiction. But something tells me that would mysteriously stop if they began to rise in the polls.

To describe anything about Warren as “angry” is so divorced from reality that it barely registers as an insult. If anything, it’s a tell, leveled by people who are themselves angry — consciously or unconsciously — that a woman would behave the same way her male rivals have for decades. If you think Warren projects some sort of anger in her public utterances, it might be time to take a hard look at what you really mean by that.

This is the cage in which we trap women who would like to be elected to high office:

Cheerfully cracking a beer in her own kitchen? Nope, that’s awkward, pandering nonsense.

“If someone doesn’t agree with you — it’s not just that you disagree — that person must be a coward or corrupt or a small thinker,” Joe Medium wrote on Biden dot com (strike that; reverse it), trying to describe Warren’s approach. The relationship between this accusation and reality is difficult to discern.

Biden isn’t the only one feeling threatened.

Mayor Pete Buttigieg described Warren as “so absorbed in the fighting that it is as though fighting were the purpose.” If you drink three beers and squint just right, you can almost divine meaning from that.

Warren has former New York City mayor Michael Bloomberg shook so bad that he’s running for president himself now. Because what billionaire could resist the opportunity to burn $200 million in a little pile on the sidewalk in order to steal 2 percent of Joe Medium’s support?

Bill Gates, the latest to add his name to the growing list of extremely rich men who seem absolutely haunted by some sort of demon in a jewel-tone blazer, wondered “how open-minded she is.”

You know, the senator whose research and life experience led her to abandon her long-held conservative ethos and become a champion for progressive causes and working-class folks? She’s close-minded.

All this only begins to make sense once you realize that these guys don’t actually find Warren angry or dismissive or condescending. No, angry is what some men sound like when they realize they’re losing to a woman.