MEDFORD — Instead of grungy trains marred by dents and rust, with sticky floors and stale odor, some lucky Orange Line riders were greeted Wednesday morning by clean and sleek silver vehicles with orange trimming that glided through stations.

“I felt like I was in the future,” said Max Augustin, 20, who boarded the first new Orange Line cars to go into service at Roxbury Crossing. “The youth is definitely going to dig it.”

The six new cars — the first of 152 that will by 2022 replace the fleet of decaying, decades-old cars still plying the Orange Line — entered service at Wellington Station, surprising and delighting commuters heading south toward Forest Hills.

People standing on platforms filmed the train as it zipped by, and many gaped at the clean, vibrant interior as they boarded.

First ride on the new train. Pretty much all media so far. pic.twitter.com/EgC9P7MSYP

Those hoping to ride the new train during evening rush hour, though, were disappointed: After three round-trips, it was taken out of service to have its data and performance metrics analyzed, the Massachusetts Bay Transportation Authority said Wednesday afternoon. It will be back on the tracks Thursday, spokesman Joe Pesaturo said, but engineers will decide when the cars reach all-day service. 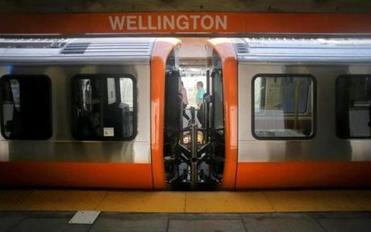 After much waiting, the MBTA debuted new Orange Line cars on Wednesday. Here’s a look at the new trains.

For T riders, the new train is among the most tangible components so far of a years-long mission to improve a transit system beset by problems, in desperate need of modernization, and still working to return the Red Line to regular service months after a train derailed near JFK/UMass Station.

Other efforts underway include rebuilding commuter rail stations, purchasing new buses, expanding the Green Line to Medford and Somerville, and replacing aging Red Line signals. There is also a new fleet of Red Line cars en route, with the first of those cars expected to hit a test track near South Station in the fall.

“This is a day that a lot of people have been waiting for, but also working toward for a long time,” Transportation Secretary Stephanie Pollack said at an event introducing the Orange Line cars at the T’s Wellington maintenance facility. “It is an important benchmark — but not the end of the process.”

The cars introduced Wednesday are a major departure from the older models’ aging upholstery and faded exteriors. They have wider doors and roomier interiors with space for disabled passengers, strollers, and bicycles; closed-circuit cameras and video recording; more handrails; and an improved communication system that displays upcoming stops and bus connections on screens throughout the cars.

Passengers described the ride as smoother and more comfortable, with better air conditioning. The main attraction for riders Wednesday, though, was the sheer novelty.

“It’s clear that this is new, this is fresh. It had the new car smell when I first got on board,” said Jared Alves, 29. “It’s exciting.”

Alves, who commutes from the North End to work in Lowell, decided to celebrate his birthday Wednesday by taking a day off and checking out the new train.

“It’s clearly a better train than the one that it’s replacing,” Alves said. “I’m sure someone’s going to spill their cup of Dunkin’ coffee on [the floor] at some point, but it hasn’t happened yet.”

As the train approached Wellington Station for its maiden voyage, T employees, reporters, and transit buffs packed the platform, eager for their first glimpse. Members of Transit Matters, a nonprofit group advocating for better Boston transit options, gave the train a thumbs-up as the ride began.

The next train to Forest Hills is now arriving. pic.twitter.com/ivpIKCrH2O

Boarding at Forest Hills, Naomi Casso was pleasantly surprised by the new model.

Before the cars entered service, officials conducted a brief tour of them at the Wellington facility and then held a ribbon-cutting ceremony.

The next train to Forest Hills is now arriving. pic.twitter.com/ivpIKCrH2O

“It’s about time,” Governor Charlie Baker said at the news conference. The trains will “dramatically improve the system’s reliability.”

However, the governor passed up the opportunity to experience the new cars for himself. Instead of following the crowd that went to the boarding platform, Baker left the maintenance facility in a car.

The new Orange and Red line cars are being made by CRRC, a rail company backed by the Chinese government that built a factory in Springfield for final assembly. However, the ongoing trade war with China prompted CRRC to appeal to the US government for relief from tariffs that will add tens of millions to the cost of the cars. CRRC’s request was denied in February, and the T has said the company would bear any additional costs.

Meanwhile, some lawmakers in Congress are working to ban the purchase of Chinese-made vehicles by US transit systems, with the House and Senate each recently passing measures. The T’s purchase of new cars from CRRC would not be affected if a ban was adopted.

At the MBTA, a second set of six Orange Line cars is scheduled to enter service in September, MBTA general manager Steve Poftak said, with more to come over the next few years. When all trains have been added, average Orange Line wait times during rush hour should be reduced from six minutes to four and a half minutes, he said.

The train has a 30-year life expectancy, officials said, and replaces the oldest, most run-down Orange Line train in the system. The delivery of the new trains was delayed several times, most recently in March when MBTA officials disclosed there was a bug with the trains’ signaling system.

“The appearance is perfect,” he said. “There’s going to be more pride in taking it.”

Kellen Browning can be reached at kellen.browning@globe.com or on Twitter @kellen_browning.
Loading comments...
Most Popular in metro
Real journalists. Real journalism. Subscribe to The Boston Globe today.